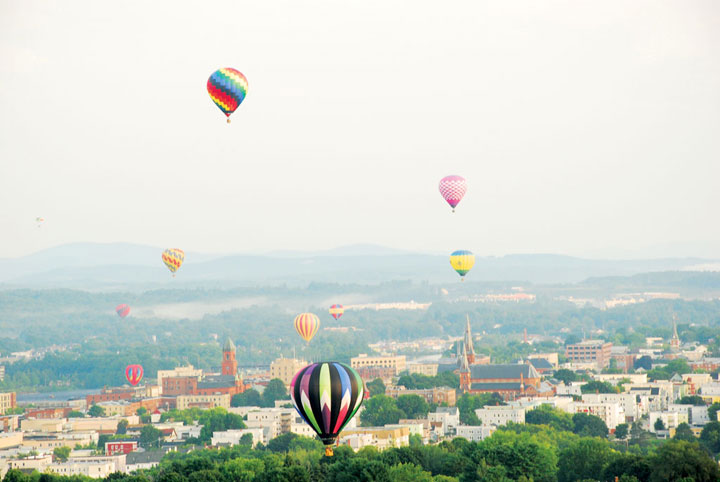 Let go of your (totally rational) fear of balloons and appreciate L-A from above at the Great Falls Balloon Festival.

Photographed and written by Will Bleakley

Panic spread across my face as I scrolled farther down the search results page.

“What are you looking at?” My girlfriend asked me.

“Huh? Oh. Just figuring out logistics for the festival tomorrow,” I answered.

For most of the roughly 100,000 attendees, the annual Great Falls Balloon Festival in Lewiston-Auburn is a fun August weekend full of raucous music, delicious fair food, and around a dozen balloons floating majestically. For a lucky few, it’s an exciting, unique, and even romantic opportunity to see the twin cities from the air. For me, having agreed to take flight reluctantly, the festival was shaping up to be a terrifying inner monologue of what ifs, hows, and oh my gods!

I arrived at the Simard-Payne Memorial Park at 5:45 a.m., stepped onto the field blanketed by deflated balloons, and was hurried into my assigned basket. This is how it ends. Death by shoddy wicker, I thought to myself as five others joined me in the four-by-four-foot basket. Before I could properly test the tensile strength of the wicker, our pilot, Bill Whidden, fired up the burner. “I always like to be first in the air,” Whidden said as we lifted off the ground. The hundreds of spectators below cheered as our balloon, reassuringly named Great Balls of Fire, kicked off the weekend’s festivities.

Back on the ground, the air was muggy, but above the tree line, it proved cool and refreshing. A slight haze covered pockets of the cities, their surrounding hills, the Androscoggin River, and the industrial mills. From a few hundred feet up, the red brick of the mills mixed strikingly with both the dark green leaves of August and a dozen scattered balloons — of all shapes and colors — each hovering at a different altitude. The Flying Purple People Eater floated dangerously close to the river. Stinky the Skunk glided over the trees of Lewiston, while Arky (a balloon shaped to resemble Noah’s ark) carried two of every animal (and five Mainers) high above Lisbon Street. Cars below pulled over to watch. Residents emerged from their houses with children in tow to point out the hot air creatures passing overhead.

“Keep your eyes peeled for power lines,” Whidden warned as the group gazed across the two cities. Until then, I had forgotten all about my Google searches, the strength of the wicker, and my Wikipedia crash course on the physics of hot air balloon travel. In fact, I had just been leaning out of the basket recklessly, trying to grab a leaf from a treetop for my girlfriend, totally ignoring that I was a gust of wind away from being stuck in Lewiston’s canopy.

As the gentle breeze nudged the balloon along, I looked out at the vista and appreciated the raw beauty of these south-central industrial cities for the first time. Even the three lifelong Auburn residents sharing this journey with me gawked at their city like tourists, taking it in as if every street didn’t hold decades of memories.

Although my nervous googling and chewed-up fingernails suggested otherwise, the Great Falls Balloon Festival was never meant for thrill-seekers. Sure, you’ll get an adrenaline kick on the initial ascent or when your pilot narrowly misses a power line, but the balloons are not gimmicks. It gives those who may have been overlooking this part of Maine, like me, an opportunity to experience the area in an unexpected and charming way.
And for that, there’s no better material than wicker.

IF YOU GO:
The 2013 Great Falls Balloon Festival returns to Lewiston for its twenty-first year during the weekend of August 16–18. Balloon rides cost $200 per person and leave at 6 a.m. and 6 p.m. from Simard-Payne Memorial Park. For those not flying high, there is entertainment provided on ground level throughout the weekend. Down East co-sponsors this event. Visit greatfallsballoonfestival.org for more details.