In this darkest month of the year, we offer a visual tribute to all things luminous. 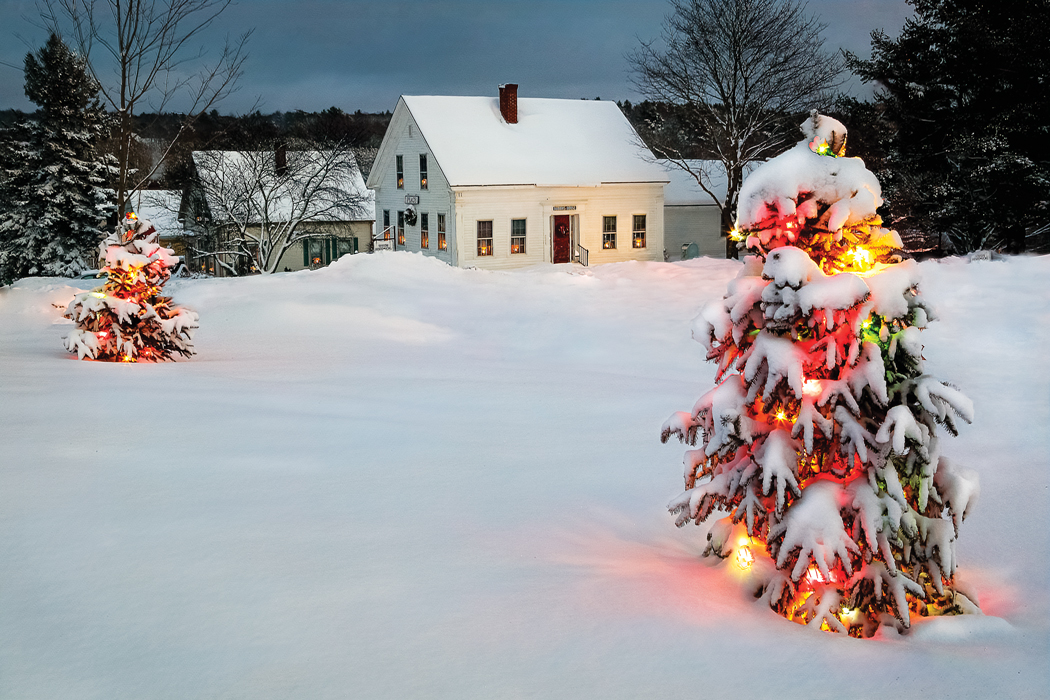 From our December 2016 issue

The soft glow from inside the windows of a warm home during an early twilight. The unearthly shimmer of the aurora above a horizon of white. The electric blaze of holiday lights adorning houses and trees. Light becomes a quasi-sacred thing during a long Maine winter. In this darkest month of the year, we offer a visual tribute to all things luminous.

With 360,000 LED lights and (last year, anyway) some 36,000 patrons, the Gardens Aglow holiday display at Coastal Maine Botanical Gardens offers each visitor 10 lights to claim for her very own. Preparations for the state’s largest light show began the first week of October, when the CMBG staff started wrapping trees and structures with roughly 14 miles worth of colored-light strands. New to this year’s event: a lit-up Fairy House Village and a rotating slate of food trucks, including Portland’s buzzy Tacos Del Seoul. Bundle up and wear comfy walking shoes for a long, luminescent stroll.

Light in the Darkness

Photographer Mike Taylor has had a thing for the nighttime sky ever since he was a kid, growing up in suburban Maryland. After a stint working in Washington, DC, as the guy who stitched satellite photos together to create Google Maps (really!), he moved to Maine in 2005 to escape big-city hassles. These days, from a farmhouse in tiny Albion, he and his fiancée, Sonia MacNeil, run Taylor Photography, a “landscape astrophotography” shop that brings Taylor (and frequent workshop participants) out into Maine’s woolier corners four nights a week (clouds permitting). For a nyctophile like Taylor, winter provides extra hours of precious darkness — meaning more time to catch the aurora, soak up the starlight, and watch the snowdrifts play with the moonshine.

How do you explain your work to strangers?

Astrophotography in and of itself is just shooting images of the night sky, so I like to call my niche “landscape astrophotography.” If you go to shoot a sunset or a sunrise, you don’t just shoot the sky, you have something in your foreground: a lake, a path, some leading line. I do the same thing at night. Because just shooting the Milky Way is cool, but it’s a lot cooler when you get reflections in a pond, or a boathouse, or a lighthouse.

Is there a tension in your photos between earth and sky? What should win out?

I think the foreground should always win out, no matter what’s going on in the sky. The northern lights are fantastic and beautiful, but if you mostly take a picture of the sky, there’s no sense of scale.

What is it that captivates people about these nighttime images?

Most people don’t get to see these scenes. First, most are asleep. People joke about me being a vampire and say, “When do you sleep?” I tell them, I sleep when you’re awake. But more importantly, light pollution is a huge factor. Because we live out in the sticks, I can shoot the Milky Way in my backyard. We get calls from people who say, “I live in Manhattan or Chicago or Los Angeles — does this really exist? Are you just Photoshopping these, or can you really see that with your naked eye?” My answer is always: drive 50 to 100 miles outside of a city, and you will be able to see it.

I’ve always been fascinated with the night sky,” Taylor says, “from long before I ever had a camera. It’s such a sense of wonder. As kids, everybody wonders about everything. Why are the stars there? When we get older, we lose that. We forget how we all live on a rock that’s flying through the cosmos. We lose our inclination to just stare up at the sky in amazement.

Winter is always cool to shoot, because the light is different. The sun’s lower in the sky, the moon is higher in the sky. And even though most of the Milky Way is below the horizon in winter, the sky is usually a lot clearer — there’s no real haze. Anytime you shoot anywhere around the coast, during the summer, there’s this marine layer of humidity and moisture just above the ocean that’s always kind of sitting there, and in the winter that stuff basically goes away. So winter is a great time to shoot the stars and the northern lights. Plus there’s the way the moon glances off of snow. It’s just very inspiring, and you can only get those shots for a few months.

You get pretty frozen trying to capture those kinds of images?

When I’m shooting time-lapse, I’ll often just bring a chair and a six pack and enjoy my surroundings while the camera does the work. It’s a lot harder to stand around in the winter when you’re freezing your butt off than it is in the summer, when you can stand around in your t-shirt and say, hey, if it shows up, great, and if not, I’m having fun.

How do you describe your relationship to light? Is it a subject, a tool, an obstacle?

Light is my frenemy. Sometimes it’s a wonderful mistress who will come down, massage you on the head, and say, “Look right here, take this shot.” Sometimes it’s the total opposite, where you’re trying to shoot here, but the light’s good over there. Then you change to accommodate it, and then suddenly it’s good over there — it can just seem set against you. You’re always chasing light to see if it’ll be the angel on your shoulder or the devil on your shoulder.

Join one of Mike Taylor’s Nighttime Photography Workshops with Down East Adventures!