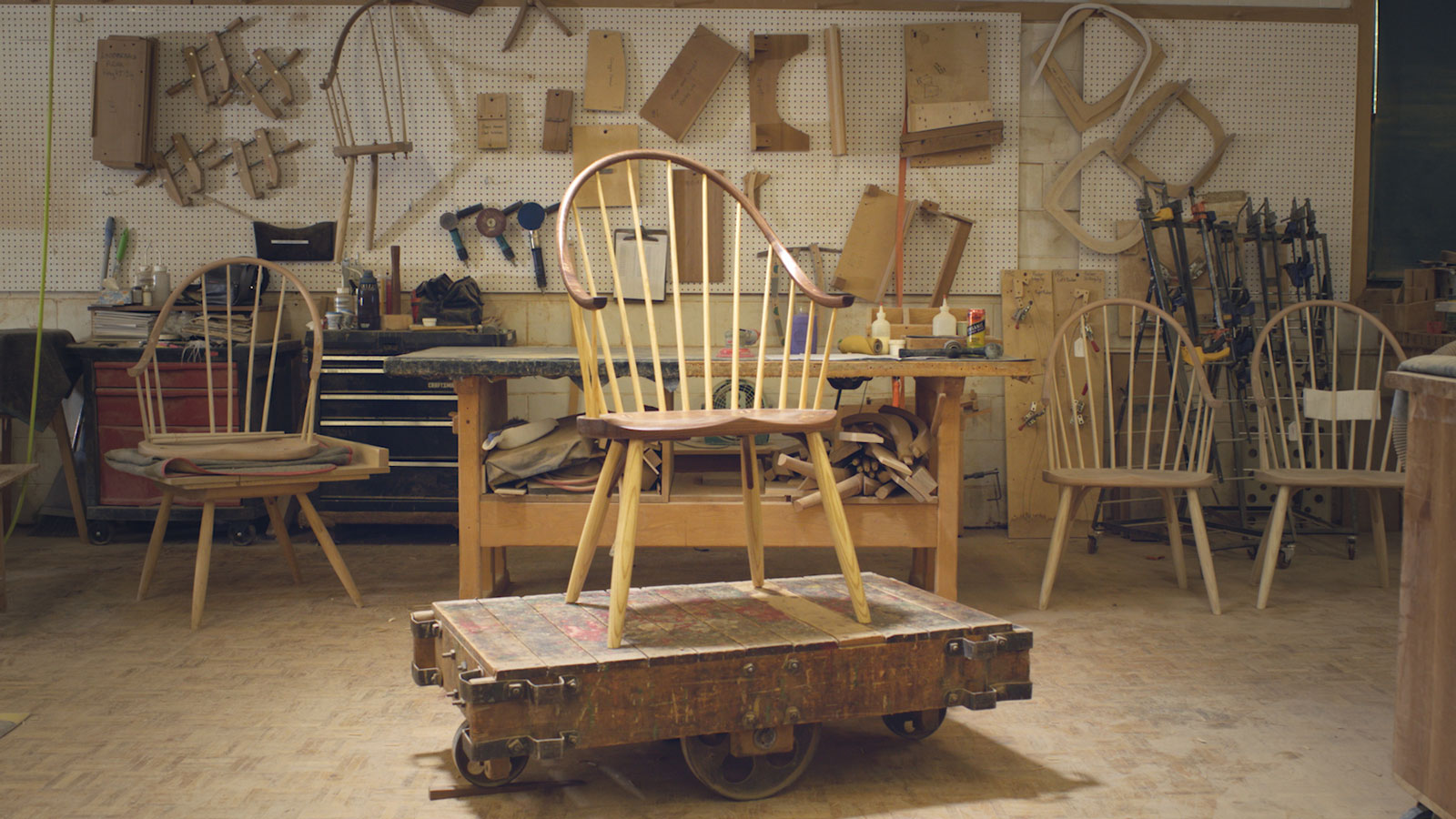 How It’s Made: The Thos. Moser Continuous Arm Chair

For nearly 50 years, furniture crafted by Thos. Moser Cabinetmakers has been sought after by discerning customers, commissioned for popes and presidents, and installed in penthouse boardrooms and the hallowed halls of the Ivy League. But if you’re looking for a symbol of woodworker Thomas Moser’s modest Maine beginnings, look no further than a pea-green metal contraption, now in its fourth decade of service, tucked in the back of Thos. Moser’s cavernous Auburn workshop.

It is not, by any stretch of the imagination, an object of beauty. The rough-and-ready device, known around the shop as “the TMC jig,” looks like a relic from medieval armory or a ’70s shop class. Five feet tall and covered in sawdust and dried globs of glue, the jig has one simple job: to bend razor-thin slices of cherry or walnut wood together into a single, fluid arm — the signature component of Thos. Moser’s most iconic piece, the Thos. Moser Continuous Arm Chair.

When Moser was first working to develop his flagship chair’s continuous arm, he found traditional methods of steam-bending a single piece of wood produced inconsistent results. Instead, he began flitch-cutting and laminating, a method used in Norway, which involves cutting a single piece of wood into slices a tenth of an inch thick, gluing them together, and bending them into one strong piece.

The old jig dates back to 1975, three years after founder Tom Moser left a tenured position at Bates College to chase his furniture-making dreams, despite having a mortgage, four children, and no formal training. He had been turning out Shaker-inspired reproductions using ancient joinery techniques but wanted to carve a niche of his own. He loved the beauty and utility of the Windsor chair, a design from 18th-century England that looks as delicate as a spider web and as sturdy as a suspension bridge. So he modified it, angling the legs, deepening the seat, and adding leg braces called ship’s knees for stability.

But the key to Moser’s new design was a continuous flowing arm — oval at the top, round in the middle, and U-shaped on the sides, the first of its kind. For that, he needed to build a custom jig, and getting it just right took him two years of tinkering, dozens of copper pipes, and hundreds of kludgy misfires.

Today, David Ginsberg, a former wildlife biologist who joined the company in 2015, is one of a handful of craftsmen who work with the trusty jig. Making the continuous arm is a task that can require years to master. Ginsberg feeds strips of wood into the jig, guiding the wood into its fluid shape, then straps the wood into place and lets it sit for three hours.

Next comes the painstaking task of shaping, sanding, and rasping the arm until it’s rounded and buttery soft. Finally, with surgical focus, Ginsberg drills holes for spindles, knowing that hours of work can go down the drain if he’s off by even a sixteenth of an inch. Still, he relishes the challenge.

“It’s so magical to me,” Ginsberg says, “that you can take this raw piece of wood and create this beautiful object.”

Among the company’s hundreds of products, the Continuous Arm Chair has remained among the most popular — and inspired plenty of imitations. It has come to symbolize Thos. Moser’s iconic style: simple, elegant, and comfortable. For years, it was part of the company’s logo. In 2015, when Maine College of Art opened its Legacy in Wood retrospective of Moser’s work, an entire room was devoted to the Continuous Arm Chair. The jig stood front and center.