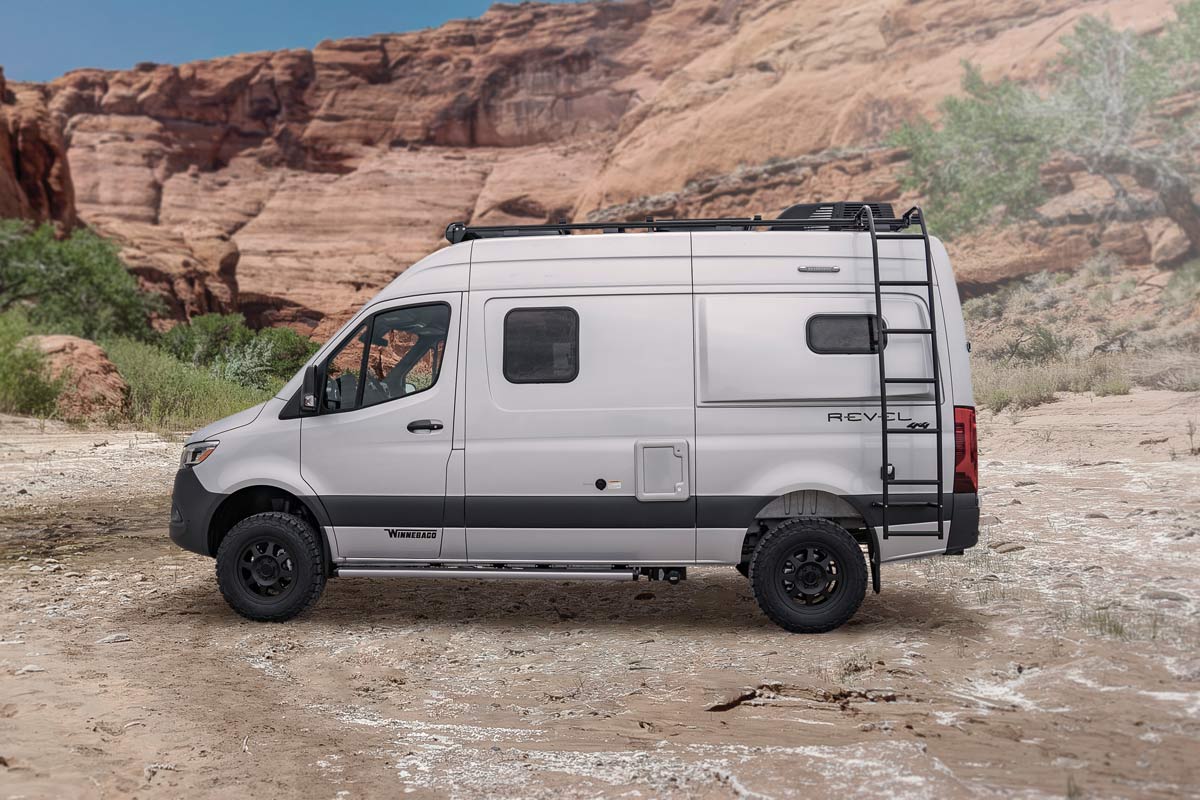 As the pandemic has grounded frequent fliers, more and more inveterate travelers are discovering the joys of the open road.

David Meerman Scott has long been a world traveler. He’s lived in Tokyo and Hong Kong. He’s visited 107 countries and all seven continents. As an author and marketing expert, the 59-year-old is invited to speak all over the world, and he and his wife, Yukari, treasure their trips abroad.

“We’ve always had two to three new trips on the radar at any one time,” David says. But when the pandemic hit, the globetrotting ground to a halt. Airplanes and hotels no longer felt safe. Nonetheless, David says, “we still had the adventurous spirit we’ve had since we met 30 years ago.”

So in October, he and Yukari bought a 2021 four-wheel-drive Winnebago Revel Diesel Camper Van, built on a Mercedes-Benz Sprinter chassis. It’s big enough to accommodate the couple comfortably, and with a full kitchen and bathroom, it allows them to take adventures and get off the grid in a way that feels safe, comfortable, and fun. In the first month after they bought it, David and Yukari, who live in the suburbs of Boston, headed straight for Maine. They camped in Naples and Greene, where they enjoyed watching the sundown, stargazing in the evening, and going for a good, exhilarating, five-hour hike.

“Being able to have this mini hotel that we could drive anywhere is really cool,” David says.

The Scotts are part of a wave of first-timers launching adventures in RVs, trailers, and sprinter vans. Daniel Caffrey, owner of Lee’s Family Trailer Sales and Service, in Windham, where the Scotts bought their van, is seeing more customers like them, folks who’ve never considered RVs before.

“It’s been a lifeline for people to see loved ones, and to remedy their cabin fever,” Caffrey says.

Nationwide, shipments of RVs from manufacturers to dealers — a key measure of the strength of the industry — are up 2 percent over last year, according to the RV Industry Association. Every month in the latter half of 2020 saw record levels of RV shipments.

“Once states came out of stay-at-home orders, people flocked to RV dealerships,” says Monika Geraci, the association’s spokeswoman. “RVs were the only way to travel that provides the freedom, while also giving you the ability to control your environment and bring everything with you.”

Typically, demand peaks in the summer and ebbs in the fall, but this year, Geraci says, it’s continued to rise through the winter holidays. “For the first time in history, parents can work from anywhere, kids can attend school from anywhere, and anywhere can be in an RV.”

First-time buyers usually comprise 25 percent of RV customers. These days, Geraci says, it’s more than half. At some dealerships, as many as 85 percent of buyers are newbies.

That includes people like Susan and Chester Bradbury, of Buxton, who for decades have tent-camped with their daughter at Somes Sound. Nearing retirement and looking to travel — and spend at least a month of winter someplace warmer — they purchased a 34-foot Reflection 310 RLS model by Grand Design, a “fifth wheel,” a trailer that their F-350 pickup can tow.

“Never in our wildest dreams did we think we’d end up with a fifth wheel,” says Susan, who is 68. With a bathroom, kitchen, and spacious bedroom all hitched to their pickup, they drove to Texas last February. This summer, they camped at Rangeley, Lily Bay, and Camden Hills state parks, as well as Mount Desert Island. “We love everything about it,” Susan says.

For retired teachers Steve and Norma Metz, of Tuftonboro, New Hampshire, an RV has provided the freedom to fulfill their retirement dreams of seeing places like the Badlands, Mount Rushmore, and Yellowstone and Arches national parks — as well as taking them back to their favorite campground in South Thomaston. The Metzes used to love tent-camping with their daughters, but now that they’re both 74, Norma says, “we’re too old to sleep on the ground.”

For David Meerman Scott, the new Winnebego offered more than just Maine camping adventures — this fall, he treasured being able to visit his 85-year-old mother.

“I was very worried about COVID and social distancing, but the weather was going to be beautiful, so I just got in and went,” David says.  He and his mom had a distanced dinner outside, and he spent the night in the van, which easily fit in the small driveway of her condo complex. “It’s three hours each way, and without the van, I’m not sure I would have gone down for a two-hour visit,” he says.  “It was terrific.”

What makes Maine such an ideal place to RV? To start with: 3,500 miles of coastline, 17 million acres of forests, 6,000 lakes and ponds, and 282 miles of the Appalachian Trail. “Maine has it all for RVers,” says Ray Lerette, sales manager for Lee’s Family Trailer Sales and Service

A potpourri of adventure options. There aren’t many places where you bag a 4,500-foot peak in the morning, paddle a kayak in the afternoon, and fish, bike, and ride an ATV all without crossing the state lines. But all that is within easy reach in the Pine Tree State.