Boothbay Harbor is More Than A Summer Place

A sparkling seaside playground that retains its working waterfront, the Boothbay region offers plenty of reasons to visit — and to stay. 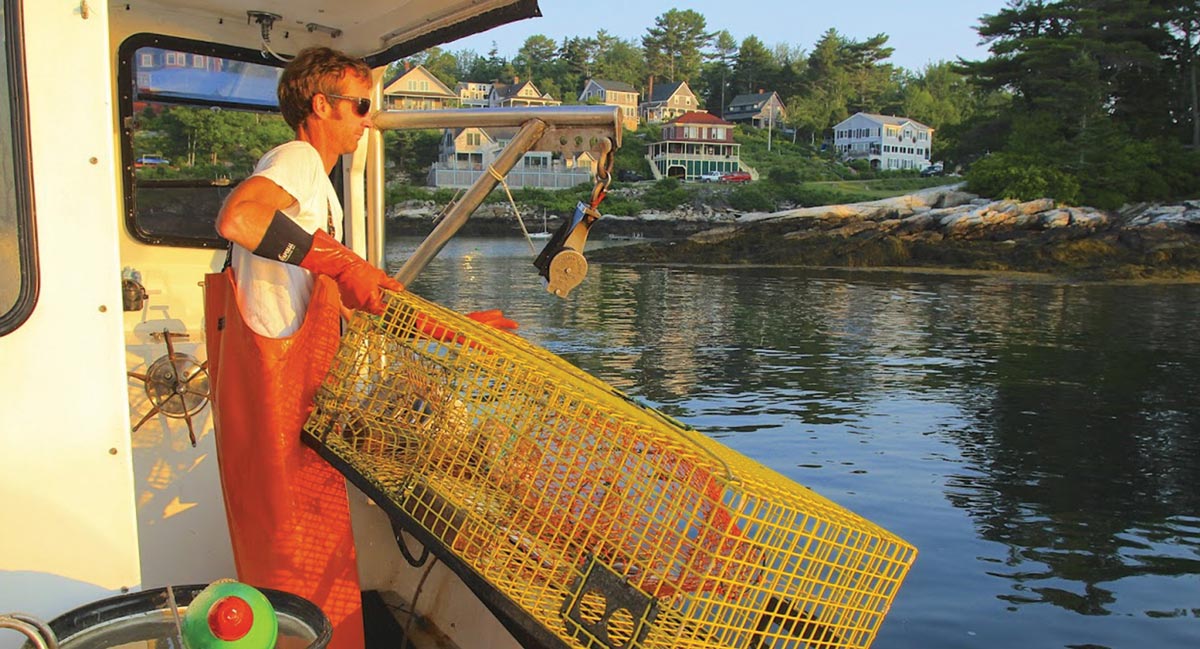 Fishing, boatbuilding, and other maritime industries continue on the peninsula year round. Photograph by Robert Mitchell.

By Jennifer Van Allen
From our May 2021 issue

When Laura and Josh Puchalski wanted to move their bakery to Maine from Massachusetts, they spent a year driving up and down the coast searching for their sweet spot. Southern Maine felt too developed. Down East Maine felt too remote. Many towns just felt too seasonal. Out of ideas, Laura put out an APB on Facebook.

Within minutes, invitations poured in from the Boothbay region, which hadn’t had a bakery for decades. Locals invited the couple to visit, gave them a free place to stay, showed them around, made introductions, and spoke candidly about the pros and cons of doing business in the area. The Puchalskis knew they’d found the balance of home and Vacationland they’d been seeking, and they opened Farm 23 bakery and cafe in Boothbay Harbor in 2019. “We felt it as soon as we got here,” Laura says. “It felt like we could really find a community here, and the way people rallied to help us get here told us that this was the right place.”

Unless you’re one of the nearly 6,000 people who lives on the Boothbay peninsula year-round, chances are you know the region as a tourist magnet. Clustered around the southern terminus of Route 27, Boothbay Harbor, Southport, and Boothbay (which includes the village of East Boothbay) have picturesque main streets, miles of unspoiled coastlines, a world-class golf course, New England’s biggest botanical garden, and a hugely popular windjammer festival — not to mention souvenir shops, mini-golf, a half-dozen ice cream shops, plus lodging options that run the gamut from rustic rental cottages to five-star resorts.

What the Boothbay peninsula also has is a small yet mighty core of residents who work passionately year-round to make it thrive.

“It’s this wonderful mix of locals who are still doing what they’ve always done to maintain the working waterfront and fishing, and people who moved here from all over the world and brought their intellect and passions,” says Danielle Betts, director for Knickerbocker Group, a Boothbay–based architecture, design, and construction firm. Compared to elsewhere in Maine, she says, tension between locals and people from away just isn’t as pronounced. “In some communities, it’s a love-hate relationship. Here, it works well.”

Boothbay’s geography shaped its history. The region hosted some of Maine’s first European settlements, as early as the 1620s, thanks largely to its proximity to fertile fishing grounds. The peninsula also offered a lot of carrying places, spits of land that settlers could portage boats across to get from one waterway to another without having to sail around. Plentiful inlets and estuaries offered spots to build tide mills for grinding grain and cutting timber.

In the centuries since, the deep, sheltered harbor has remained Boothbay’s lifeblood. Shipbuilding, fishing, canning, and ice harvesting flourished. When regular steamer service started in the 1860s, the area became a popular vacation destination for wealthy rusticators, some of whom established summer colonies. Ever since, tourism and the working waterfront have worked in tandem to shape the region’s economy and cultural fabric.

In the summertime, Boothbay Harbor’s downtown bustles with galleries and boutiques, along with places to peruse a farm-to-table menu, sip craft beer, and/or crack into a lobster freshly plucked from nearby waters. Superyachts, day sailers, and dories pack the waterfront, as do boat charters ready to whisk visitors off to explore islands, lighthouses, and the wide-open ocean that seems to beckon everywhere you go.

A lot of communities have downtowns, but they don’t have heart. I feel we have a heart.

The peninsula’s serpentine roads hug quiet coves, and all along them, boatbuilders, sailmakers, and fishermen work with a view of the shore. Hodgdon Yachts, the country’s oldest boatbuilder, which launched here in 1816 and now operates under the fifth and sixth generations of family leadership, offers services and storage in Southport and runs a marina in Boothbay Harbor and a manufacturing facility in Damariscotta. Washburn & Doughty builds tugboats, ferries, and other steel vessels in cavernous bays in East Boothbay. In a weather-beaten, cedar-shingled loft around the corner, Nathaniel S. Wilson, an internationally known sailmaker, rigger, and designer, has stitched sails for some of the world’s most prominent vessels, including the U.S.S. Constitution.

Meanwhile, the prominence of community groups exemplifies locals’ commitment to fostering a community and not just a vacation destination. The peninsula has more than 80 nonprofit organizations, working on everything from preservation to health care. Among them is the Boothbay Region Art Foundation, formed in 1963, when a local school lacked funding for an art teacher. A group of artists held an auction on the library lawn, raising $1,700 to help hire one. Now, the organization they founded runs a gallery downtown, puts on a half-dozen exhibitions a year, and funds two annual scholarships for local high school students pursuing art in college.

In 1974, Drs. Charles and Clarice Yentsch founded the nonprofit Bigelow Laboratory for Ocean Sciences with the idea of creating an independent research institute free of the bureaucratic constraints common to academic institutions. Today, Bigelow employs about 100 year-round, and attracts scientists and students from around the globe and (in non-pandemic times) welcomes the public to its East Boothbay campus for lectures, tours, and art exhibits. In 2013, Bigelow’s leaders worked with community leaders to launch the Boothbay Sea and Science Center, to teach local kids seamanship and marine sciences through programs and partnerships with local schools and summer camps.

In 2001, when a century-old Queen Anne–style Knights of Pythias lodge went on the market, a group of locals rallied to save it. “People in town just felt there was too much history there to let it disappear,” says Cathy Sherrill, executive director of what’s now the Opera House at Boothbay Harbor. After hundreds of people showed up to a fundraising concert by Jackson Browne, a friend of author and Boothbay resident Richard Ford, it was clear the 1894 building was destined to be a performing arts venue. The Opera House now hosts more than 80 shows year-round, about half of which are typically held in the off-season.

Boothbay’s tourism infrastructure and civic well-being sometimes go hand in hand, insofar as investors in one often also invest in the other. Most prominently, Southport resident Paul Coulombe, a onetime distillery owner who sold his company to Jim Beam in 2012, has donated approximately $10 million to local community groups. The owner of the Boothbay Harbor Country Club, Boothbay Harbor Oceanside Golf Resort, and other properties has supported the local schools, ambulance services, the YMCA and more. The leader of Knickerbocker Group have supported the Boothbay Health Center, the Boothbay Region Land Trust, the Opera House and others. The owner of Midcoast Hospitality Group, which oversees the management of Newagen Seaside Inn, Linekin Bay Resort, and other properties, has supported the Southport Fire Department, Community Resource Council and the Harbor Theater, among other causes.

In the past year, the peninsula’s year-round community has grown, as many visitors and seasonal residents rode out the pandemic in Vacationland. Local businesses, like Farm 23, worked hard to survive the scary, uncertain times.

As the nation went into lockdown in March of 2020, the Puchalskis held a raffle. The entry fee was the purchase of a gift card from any local business. In the end, locals spent $6,600 on everything from pet supplies to hair salons. The raffle winner, who took home all the gift cards, gave most of his winnings away. It was the kind of collective effort that warms the heart of Betty Maddocks, a Boothbay Harbor native and owner of Janson’s Clothing Store in Boothbay Harbor.

“We’re lucky to be in a community of people who understand that pandemic or not, if you want to see local businesses survive, you have to support them,” she says. “A lot of communities have downtowns, but they don’t have a heart. I feel we have a heart.”

From antique schooners to extravaganzas of lights, the Boothbay region stays festive year-round.

Many events took a year off in 2020, due to the pandemic, but are coming back this year, with social distancing and other safety protocols in place. Not all dates were announced when this magazine went to press. Check with the Boothbay Harbor Region Chamber of Commerce for more information on these and other events. 207-633-2353.

Boats are an inextricable strand of Boothbay’s DNA. The last weekend in June, vintage schooners swoop into Boothbay Harbor at full sail for the Windjammer Days Festival, which heralds the official start of summer. This year’s 59th annual event (June 27–July 3) features tall ships, antique boat parades, fireworks over the harbor, and more. Beginning Labor Day weekend, Boothbay-ians send the summer off with Harbor Fest (September 3–12), which includes a 5K run and a half marathon, and the Fishin’ for Fashion show, highlighting designs made from industrial marine materials (think tarps and shrink-wrap). On Indigenous Peoples’ Day weekend, leaf peepers converge on the green at the Boothbay Railway Village for the Fall Foliage Festival (October 9–10) to enjoy live music, artisans, antique autos, model trains, and more, all while taking in the technicolor splendor of the turning leaves. It’s not every day you get to see massive gourds falling from the sky, as you do at the Damariscotta Pumpkinfest & Regatta (October 8–11), not far from Boothbay, where squash are catapulted over the horizon and dropped from a crane hoisted 200 feet in the air, among a host of other family-friendly activities.

Each November, Coastal Maine Botanical Gardens (207-633-8000) tricks out its gigantic campus with more than 650,000 LED bulbs for Gardens Aglow (typically mid-November through December 31). Last year’s edition was a COVID-safe drive-through event and enough of a hit that the gardens will likely use the same format this winter. The event happens concurrently with Boothbay Lights, a regional celebration that includes a boat parade, a gingerbread–house-building competition, a festive window-display contest, and an illuminated fire-truck parade.

The 2021 lineup at the 390-seat Opera House at Boothbay Harbor (207-633-5159) includes country singer-songwriter Rodney Crowell, folk multi-instrumentalist David Bromberg, banjo virtuoso Alison Brown, and dozens of others. Concerts will involve distanced seating and other COVID-safe measures. “Even if we are all wearing masks all summer, we will be smiling underneath,” executive director Cathy Sherrill says. The Carousel Music Theater (207-633-5297), a summer dinner theater built in 1982, is hoping to take the stage in 2021 after taking the pandemic season off.

Boothbay has long been a haven for artists, and the area is filled with venues and events showcasing their work. “In this relatively small geographic area, there are so many hidden coves, inlets, and new places to discover. And artists love that,” says Mark Coates, secretary of the Boothbay Region Arts Foundation, which holds shows and classes at its gallery (207-633-2703). This year’s schedule includes the Maine Photo Show (April 10) and a student art show (May 14), plus four member shows (May 26, June 30, July 28, and September 1). Peek inside the region’s galleries at the First Friday Art Tours, June through October. Pick up a map at the chamber offices. Bigelow Laboratory for Ocean Sciences, in East Boothbay (207-315-2567) will exhibit the artwork of students and pros who are involved with the Gulf of Maine ECOARTS project, which focuses on the impacts of climate change. Bigelow also welcomes the public for Cafe Sci lectures during the summer. In 2021, those free talks will be streamed online. Registration is required.