How the Organic Farming Revolution Changed Maine For the Better

An essay collection considers Maine’s role in the organics movement. 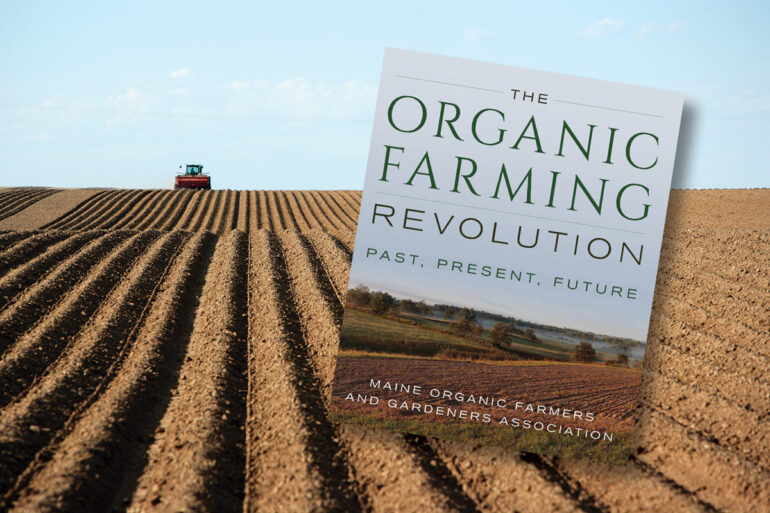 By Will Grunewald
From our February 2022 issue

Whereas agriculture has existed for millennia, the Maine Organic Farmers and Gardeners Association has been around for just a handful of decades. The very notion of organics is barely older than MOFGA — the term began circulating among botanists and agriculturalists in the first half of the 20th century, a reaction to the new synthetic fertilizers, pesticides, and herbicides introduced on farms. MOFGA was founded in 1971, led by a cadre of back-to-the-landers drawn to a more traditional, noncorporate, environmentally conscious way of living and of producing food — anachronistic and progressive at the same time. A year later, the group started the country’s first organic-certification process for farms. Last year, when MOFGA turned 50, more than 500 active Maine farms were operating with its certification, and Maine had the second-highest number of organic farms per capita, trailing only Vermont.

All of that is detailed in The Organic Farming Revolution: Past, Present, Future (Down East Books; Softcover; $34.95), an essay collection published on the occasion of MOFGA’s 50th anniversary that provides an excellent, piecemeal perspective on the history of the organization and of the broader organics movement. The book captures the enterprising spirit that newbie farmers brought to their rethinking of agriculture, inspired as many were by major events and historical forces, from the Vietnam War–era counterculture to the publication of Rachel Carson’s Silent Spring to the federal government’s heavy-handed favoritism toward agribusiness (“Get big or get out” was a common refrain from Earl Butz, secretary of agriculture during the Nixon and Ford administrations and a recurring villain in the book). On the ground, though, the forces at work were more personal. In the 1970s, Chellie Pingree studied under foundational Maine organics advocate Eliot Coleman at College of the Atlantic and apprenticed with organic farmer Tony Bok in Camden before starting her own small farm on North Haven, running for Congress, and joining the House Committee on Agriculture. The book is full of such instances of close connections, many formed through MOFGA, shaping the organics movement.

Pingree and Coleman both contribute to the book, which comprises 31 essays in all. James Beard Award-winning locavore chef Sam Hayward writes about the staying power of the farm-to-table movement, one example of how organics grew into a symbiotic network of seed suppliers, millers, meat processors, restaurants, breweries, and markets. Former Penobscot Nation chief Barry Dana adds a reflection on how organic principles relate to indigenous foodways. American Farmland Trust president John Piotti lays out the need to protect land for agricultural uses. Other essays hit on, among other topics, the pleasures of home gardening, the historical contributions of Black farmers, Somali Bantu immigrant farmers arriving in Maine, farm financing, and farmworker rights.

If there’s a shortcoming, it stems from a prevailing assuredness that the organic way is always the way (the book was written by people who committed their life’s work to furthering organics, after all). “When we look at the future of agriculture,” MOFGA executive director Sarah Alexander writes in the introduction, “we look at the future of human survival on this planet. The colonized view that technology will save us created the exact mess that we’re in. We possess every tool in our current toolbox to address the issues we face. This means cooperation, local solutions, and working at the pace and scale of nature.”

There are, however, other smart and well-intentioned people who worry that the pace and scale of nature might come up short as climate change threatens to drive food shortages, especially in poorer countries, and who consequently take interest in alternatives like soilless hydroponic farming or genetically modified crops. Some scientists are hacking photosynthesis in an attempt to make plant growth more efficient. That’s not to say these are necessarily good ideas — they have their detractors inside and outside the organics community — but even a rosy analysis produced a few years ago by Europe’s pro-organics Research Institute of Organic Agriculture found that organic farming could sustain humanity only if vegetarianism was universally adopted and worldwide food waste reduced by half. Can we be certain our toolbox contains every tool?

Pingree, in her essay, writes about the connection between organic farming and a more recently popularized concept, regenerative farming. Like organic farming, regenerative farming emphasizes healthy soils, but ultimately for the sake of sequestering atmospheric carbon. Crop rotation, ground cover, and fertilizing with manures and composts are methods intrinsic to both, as is the desire to make agriculture an ecological asset. Whether or not organic farming has all the answers, it has already helped to come up with a bunch. As Wendell Berry, the octogenarian novelist and environmental activist, is quoted in the foreword: “Real agriculture is focused on human centuries, not on man-hours.”