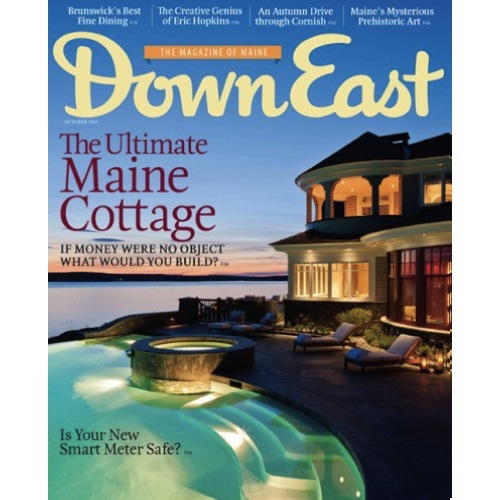 How Safe Are Smart Meters?

The most noteworthy aspect of this elaborate project may well be the craftsmen themselves.

The soaring vision of Eric Hopkins.

The work of top Maine craftsmen reaches a crescendo in an elaborate new home in Southport.

Stories in the Rock

The charming village of Cornish has reinvented itself as the perfect destination for a country drive.

Brunswick’s Clementine transforms food into beautiful — and delicious — art that’s a delight for the palate.

Like his first book, Sex, Drugs & Blueberries, Crash Barry’sTough Island: True Stories from Matinicus (Maine Misadventures, hardcover; $18; mainemisadventures.com)is not for the easily offended. Barry’s account of the months he spent as a twenty-three-year-old ex-Coastie working on a Matinicus lobsterboat are replete with casual drug use, epic outbursts of profanity, and displays of depravity. They also have the virtue of seeming utterly recognizable.

Read what our readers have to say about Maine.

Rest In Peace
The Wiscasset bypass meets its demise.

The Wiscasset bypass, on life support since the June 2010 discovery of a bald eagle’s nest in its would-be path, has died at the age of fifty-three. Maine Transportation Commissioner David Bernhardt pulled the plug on August 3.

The resignation of Maine’s Marine Resources commissioner wasn’t what it appeared.

A comprehensive guide to flora in Maine’s national park provides a first-rate education in local botany.

Sometimes it’s the imperfections of a house that make it a home.

Can you identify this autumnal waterway in western Maine?

No country for old moose?