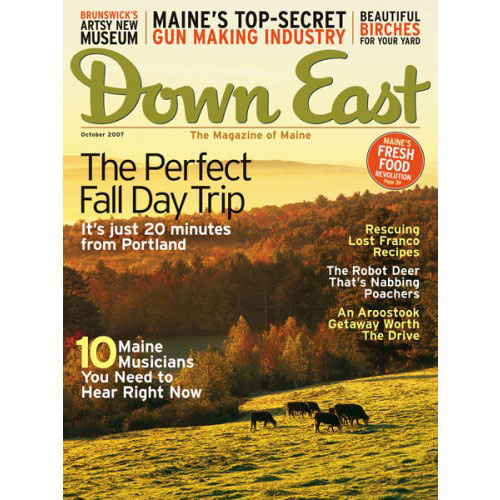 Students aren’t the only ones who will enjoy the college’s stunning new recital hall and art museum.

Soups with a Maine Flavor

The fragrance of bubbling, warm soup can hypnotize the strongest among us to extend a bowl and pull up a chair to the table. These days of hurried meals and convenience foods have caught up to us. It’s time to slow down, to appreciate once again the flavors that can come from our own kitchen in surprisingly

Ten local musicians you should be listening to right now. By Sam Pfeifle

An epidenic of poaching is sweeping across Maine, and wardens are using every weapon in their arsenal to stop it.

When the prophet William Miller announced he knew the exact date of Doomsday, thousands of Mainers prepared for the end.

More Maine cooks are discovering that building a menu from local food is reconnecting them to a fresher, tastier way of life.

In search of Franco-America (and its food)

Cajun cooking is world famous. So why isn’t the food of their northeastern cousins?

Autumn, the Way It Should Be

Looking for a perfect fall day trip just twenty minutes from Portland? Then take a drive to New Gloucester, where hayrides and apple-picking remain the order of the day.

On the Road to Pineland

New Gloucester’s crown jewel is the former Pineland Center, a once notorious institution that has become one of Maine’s great success stories. It’s time to pay it a visit.

Vermont might like to think of itself as the foliage capital of New England, but it’s lacking one thing only Maine can provide – the glorious contrast of blue-green saltwater. This tidal river in the midcoast, separating two closely entwined communities, is a prime example. It’s one of two major Maine

Trap Day Comes Early Lobstermen hope a compromise this year will keep Monhegan’s fishery alive. For years, Trap Day has marked the start of winter on Monhegan, as the island fishermen all set their traps together on December 1, officially kicking off what has traditionally been Maine’s only winter-only

Where in Maine? The lake featured in your August mystery photograph is Sebago, where my family has vacationed since the 1940s when my mother’s family first moved to Portland. It is the only place my immediate family ever went, and I still rent a cottage in East Sebago on the point next to Simpson’s Beach.

My memere – or grandmother – was named Oline Doiron, and she made textiles and shoes, first at the Goodall Mills in Sanford and later at the Nike factory in Biddeford. As a Nike employee she was entitled to certain discounts on sneakers in the company store, and so I found myself branded with a Swoosh

SPORTS Girl Power In the mood for something a little . . . different? Then check out Maine Roller Derby’s bout against the Albany All Stars October 6 at the Portland Expo. That’s right, roller derby is back, this time as a women-run enterprise full of big hits and non-stop action. Watch the skaters (including

For a boy from Rumford Point, the coast was a strange and magical place.

Your monthly guide to enjoying life in the pine tree state.

DINING Aye Carumba! Brunswick’s El Camino gives south of the border recipes a deliciously Down East twist. Unless you’re an irredeemable sourpuss, it’s impossible to walk into the El Camino Cantina and not feel a smile come to your face. With a ceiling festooned with chains of colorful paper snowflakes,

Editorial Opinions from Across the State.

Sun Journal, Lewiston Solar Panel Squabbling Yeah, but how’s it going to look?” is a great question before repainting the den, but a feeble interjection when evaluating alternative energy projects, with which looks should be irrelevant. Emphasis on “should be.” Yet homeowners who adopt new energy technologies,

The danger of shipping lime was brought into focus in Rockport at the turn of the century.