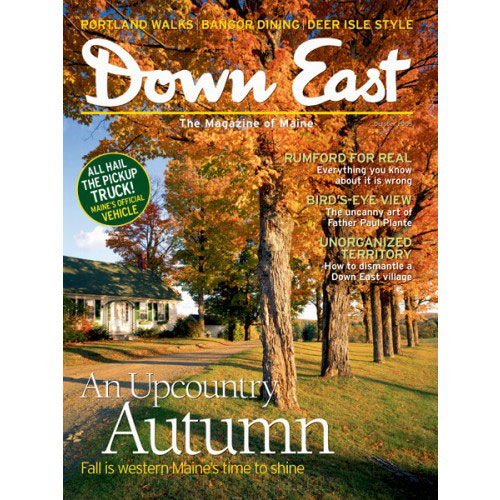 The Reverend Paul Plante, of Oquossoc, has two vocations ? the priesthood and painting ? and he pursues both with a quiet intensity.

All Hail the Pickup Truck!

(Maine’s Official Vehicle); Pickup trucks are country-and-western songs on wheels. No wonder they strum the heartstrings of Mainers.

When you?re hunting for the rare ? and expensive ? ?truffle of Maine,? it?s easy to get carried away.

A Place of Her Own

A stunning Deer Isle home proves what is possible when three inspired individuals ? owner, builder, and architect ? see eye-to-eye on a project. The result is far greater than the sum of its parts.

Under the October sun, this stretch of shorefront looks like Anyplace, Maine. The rocks push out into water that might be salt, might be fresh, might be a river, might be a lake. The trees glow pleasantly against the blue, the air is clear, and the light is bright. This photo could have been taken anywhere.

Maligned and misunderstood, the people of this Androscoggin River milltown are proud of their past and are working to build a brighter future.

The Land Use Regulation Commission is an overstretched, understaffed bureaucracy. So why are so many Maine towns surrendering their destinies to it?

Letters to The Editor

Where in Maine? I became intimately acquainted with Ripogenus Gorge [“Where in Maine?” August 2005] after a whitewater rafting mishap in 2003. It is a beautiful location, but it’s not such a great view scraping along the bottom of the Penobscot River! —Kelly Morgan Orono, Maine Base Closings While

A gourmet food company in Whiting hopes to make Maine the canning capital it once was.

From hikes to drives, picnic spots to golf courses, fall is fun in Maine.

The hero of Cathie Pelletier?s new novel is no Hemingway.

Solutions from other states can help bring Maine up to speed in the newest drug war.

If you like walking tours, you like Maine. Half the cities and towns in the state seem to publish a pamphlet that guides people on a constitutional of each community, pointing out places of historic, folkloric, and architectural interest. Portland has its share of such tours. It’s also home to some of

The Elm and I

Some woodworkers might disdain the elm, but not the good people of Addison.

A family from South America has redefined international cuisine for the Queen City.

Autumn kicks into gear with performances, exhibits, and free-for-alls.