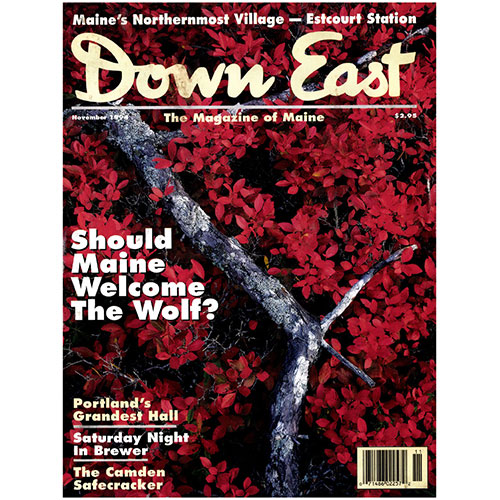 Return of the Native?

The last timber wolf in Maine was shot on sight. Should we bring in more to face the same fate? As the debate heats up, the canny canine seems to be deciding the issue for itself. By Jeff Clark.

Hottest spot in Brewer is a country-rock bar famed throughout Maine and the Maritimes for its foot-stomping fun. By Sarah Goodyear.

So you think you know your way around the state. This scene seems familiar, but do you recognize it? Photograph by Thomas Mark Szelog.

A family on Great Cranberry Island has figured out a way to enjoy their fine old summer home in any season of the year. By Nan Lincoln.

Even larger than New York City Hall, the granite and marble monument that is Portland City Hall hints at how the city saw itself  in 1912. Photographs by Tillman Crane.

The beguiling thing about a puppy is its unquenchable optimism. It gives the impression that things are just right, when the yellowed pages of the New York Times under its feet contend that everything is wrong. By Caskie Stinnett.

The Talk of South Thomaston