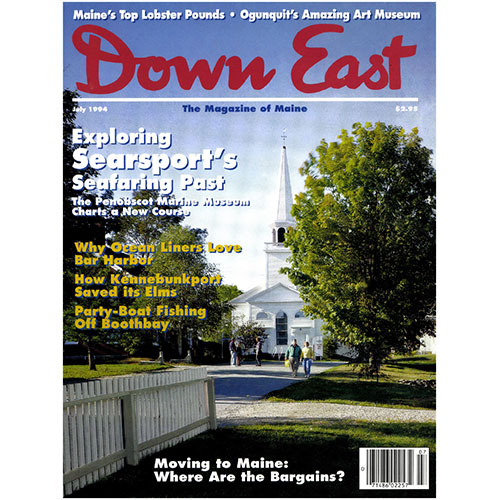 Tucked in the heart of this seafaring village, the Penobscot Marine Museum has grown into an intriguing showcase for the salty heritage of midcoast Maine. By James P. Brown.

The Lure of the Cod

A day at sea aboard a Boothbay Harbor party boat is a bracing way to learn what’s happening in the Gulf of Maine. By Sarah Goodyear.

Faced with losing all of its majestic elms, the little resort town rolled up its sleeves and fought hard to save what  it could. By Jeff Clark.

Captain Benjamin Willard’s Independence Day salute in 1873 was just one of the pranks he pulled on the good burghers of Portland. By William David Barry.

Sale of the Centuries

An old-fashioned estate auction, with 200 years of one family’s history on the block, is a poignant — and increasingly rare — midsummer event. Photographs by Tonee Harbert.

The Only Way to  Eat a Lobster

Get thee to a lobster shack. Maine’s top restaurant critic picks seven of the best. By D.B. Eberhart.

How We Built an Heirloom

When a Bridgton woman set out to surprise her husband, she didn’t know that half the town would be in on the secret. By Deborah Daw Hefferman.

Getting a cow to pose for her portrait can take a whole herd of people. By Virginia Thorndike.

Making it in Maine

Bold Legacy of an Ogunquit Bohemian

The Strange Case of the K-14

The crash of a World War  II dirigible off  Little Cranberry Island remains enshrouded in questions to this day. By Hugh L. Dwelley and Ellen MacDonald Ward.

I write on an indestructible Royal standard typewriter having what is known as “touch control” which in 1927 was the turbo of typewriters, the last word, or, in the patois of the time — the cat’s pajamas. By Caskie Stinnett.

The Talk of Bar Harbor

The Quotable moose: A Contemporary Reader by Wesley McNair