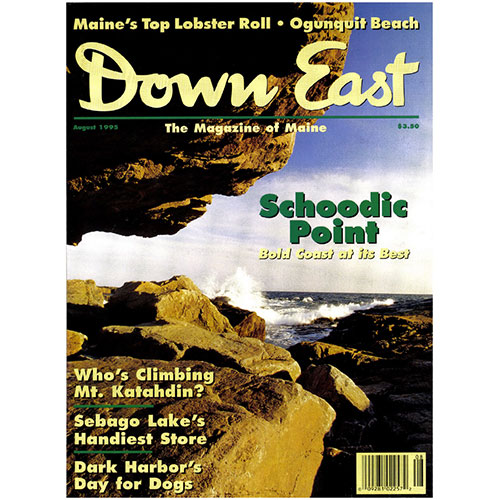 Opinions and advisories on seat-belt laws, narrow-gauge railroads, and a great lady from Maine.

Only one in ten visitors to Acadia this summer will discover the rockbound spectacle of the park’s sole mainland section. By Joseph E. Brown.

Climbing Maine’s tallest mountain can be as much a social experience as a wilderness experience these days, as Edgar Allen Beem learned when he tackled the peak with his thirteen-year-old daughter.

Before you can find  it, you need to know what to look for. Food critic D.B. Eberhart offers the straight skinny.

When a Rockport woman turned an abandoned church into a contemporary aerie, she not only created a striking new home, she saved a venerable local landmark. By Sarah Goodyear.

Home from the War

Artist Norman Rockwell came to Maine  in 1945 to find a suitable down-home subject for an important Saturday Evening Post cover. By Arthur Guptill.

Here’s an idyllic scene that might well be on an island, but it isn’t. It’s on a storied peninsula. Recognize it?

Fitch’s General Store, in East Sebago, may be the last of its kind in Maine. By Jeff Clark.

My Son, the Golf Pro

He’s only three, but already his grandfather has pronounced him a “natural,” though annuals and perennials quake at the sight of him. By Richard Grant.

For an instant, the beach is innocent of yesterday and tomorrow. Photographs by Jeff Stevensen.

The House on Gilbert Head

It seemed impossible that the great gray house that had known so much life was suddenly empty and on the market.  A reminiscence by John Cole.

It took a hardy crew to haul mackerel out of Maine waters at the turn of the century. By Ellen MacDonald Ward.

It is hard to say when one is asking too much of  life and I am fully aware that I hover very close to the edge most of the time. By Caskie Stinnett.

The Talk of Dark Harbor