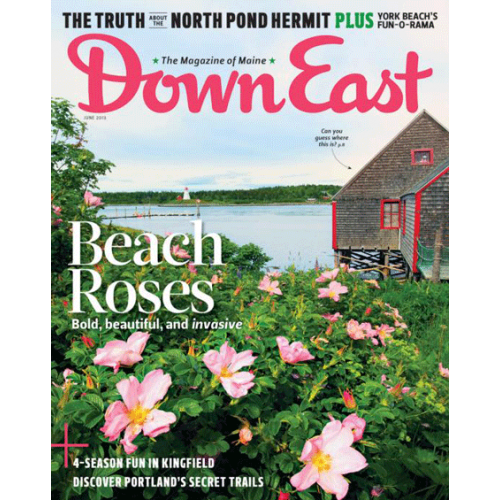 Or, my Rugosa just beat up your all-America selection

A Town For All Seasons

Kingfield no longer slumbers after the skiers have gone.

A hard day’s journey across Portland proves that even in Maine’s big city, wilderness is close at hand.

Step off the sand and into your childhood at York Beach’s Fun-O-Rama.

Can you identify this relic of Maine’s fishing industry?

Letters to the editor

Christopher Knight ran into the woods of Rome, Maine, in 1986, set up camp, and didn’t leave for twenty-seven years. He had only one brief interaction with another human during that time and committed more than 1,000 burglaries in order to feed and clothe himself. He was finally caught on April 4 stealing from Pine Tree Camp.

A Haven for Hermits

The entrepreneurial success of the “Hermit of the Maine Desert” shows a longtime fascination with recluses in the Pine Tree State.

After a kidnapping, Jackman’s highway “patrolman” is back on duty.

Maine birders are on the look out for some rare breeds — no binoculars required.

Twenty-five years after Maine voted for Enhanced 911, the system remains a work in progress. But it does work (sort of) and it’s making progress (gradually). Just give it time (and money). A story of unintended consequences, the birth of a bureaucracy, and the quirky workings of Maine politics.

A village garden is blessed with a bucolic view.

When Hyperlite Mountain Gear’s founder Mike St. Pierre couldn’t find the ultralight outdoor equipment he wanted, he created it himself.

The Train to Success

The Maine Sea Salt Company offers visitors a behind the scenes look at the manufacture of a popular seasoning.

Go here. Do this. See that.

A Look Back at Down East Twenty-Two Years Ago