At the heart of the public debate over the proposed power-transmission project known as the New England Clean Energy Connect is a remote swath of woods, mountains, and streams that 53 miles of newly cut corridor would cleave. It’s a rugged stretch of the state that few Mainers have laid eyes on. We sent a team of photographers for an up-close look at the embattled backcountry tract known as Segment 1. 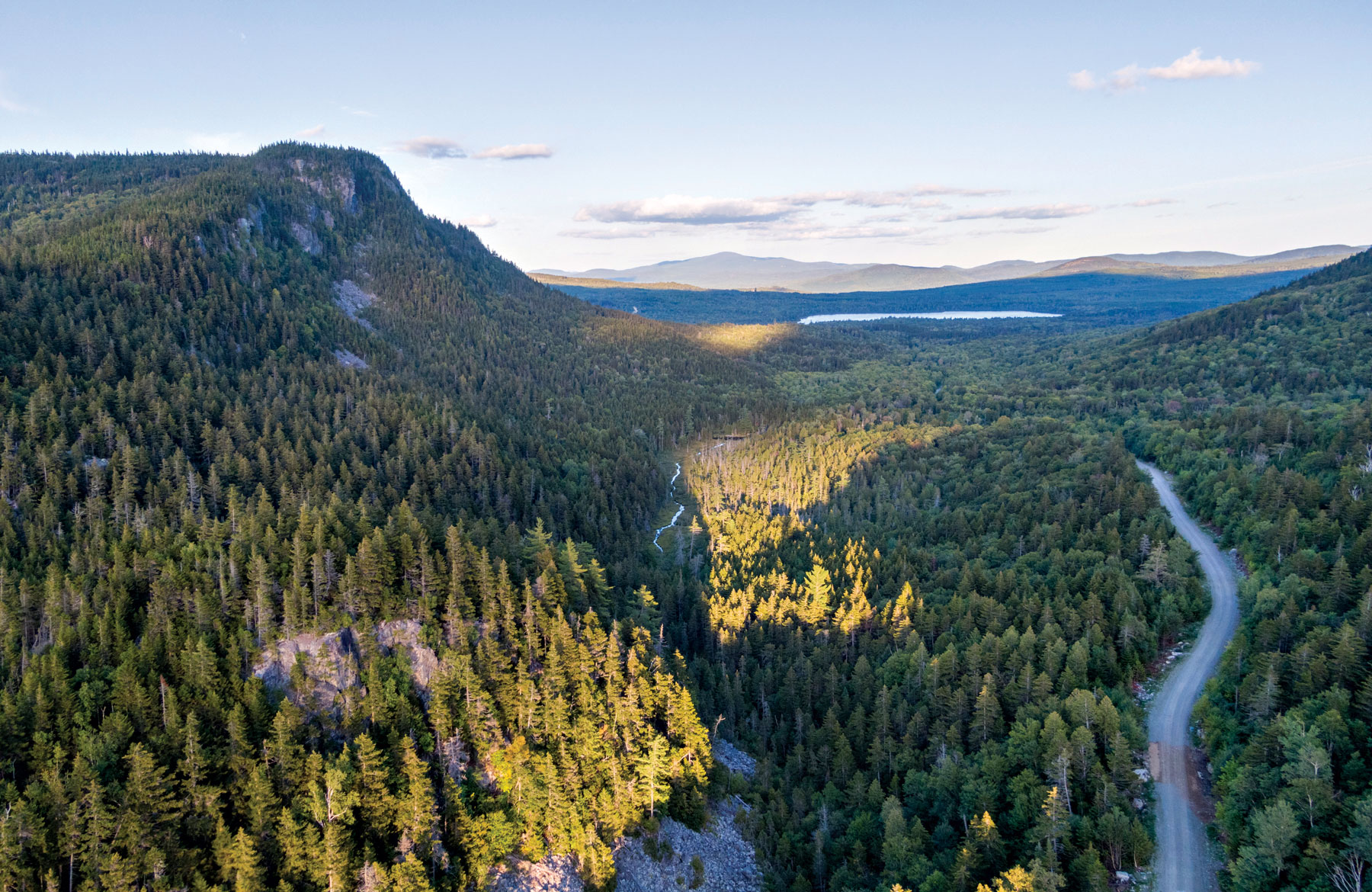 Above: The sheer face on the left is part of Greenlaw Mountain, known to some New England peakbaggers as Crispo Peak, after a pioneering climber of all of New England’s 3,000-footers. The power corridor would pass between the 3,011-foot mountain and Rock Pond, visible at the upper right. Transmission towers in Segment 1 would average 100 feet tall, with some reaching as tall as 125 feet. CMP has committed to using pre-treated, non-reflective lines in this vicinity, to minimize glare. This area is within the viewshed of a popular trail up nearby Number 5 Mountain, administered by The Nature Conservancy.

In June 2018, a consortium of Massachusetts electric companies signed an agreement with Maine’s privately owned utility, Central Maine Power, and the Canadian public utility Hydro-Québec, agreeing to buy electricity generated by Canadian mega-dams and routed through Maine along a 145-mile transmission line. Environmental groups objected almost immediately to the $950 million undertaking, conceived to help Massachusetts meet state-mandated targets for renewable energy. Maine towns along the proposed corridor launched a flurry of largely symbolic votes endorsing or condemning the project, with several towns first offering, then rescinding their approval. The Sportsman’s Alliance of Maine voiced its support, then later withdrew it. As a candidate, Janet Mills expressed skepticism of the project, then came out in favor after being elected governor.

CMP and Hydro-Québec say the project will contribute to greenhouse-gas reduction, create some 1,600 Maine jobs during its development, and boost tax revenues in towns along the route. The companies, which stand to make billions over the life of the transmission line, have committed to a Maine benefits package worth $258 million, which includes subsidies to lower Mainers’ utility costs, funds to increase access to heat pumps and electric vehicles, and investments in broadband expansion, tourism promotion, job training, and other economic development programs.

Detractors raise several objections. Some maintain that Maine gets too little out of the deal. Environmental groups, including Sierra Club Maine and the Natural Resources Council of Maine, argue the project doesn’t sufficiently diminish reliance on fossil fuels, that Hydro-Québec could simply use the line to reroute energy currently being sent elsewhere. “The proposed project is not about climate,” reads one NRCM brief. “It’s a shell game to sell existing hydropower to Massachusetts because they’ve agreed to pay more for it.”

But what has most galvanized opposition in Maine is the plan to cut 53 new miles of transmission corridor, clearing a strip of land that would stretch from the Canadian border southwest of Jackman to Moxie Pond, in The Forks, where it would join an existing power corridor running south. It’s a wild and woolly parcel, mostly visited by hunters and anglers, loggers and foresters, snowmobilers and ATVers, and a few intrepid hikers. The route traverses the range known as the Boundary Mountains, a rolling patchwork of thickly wooded mountainsides and more cut-over areas, all accessed by a tangle of logging roads. The corridor would pass through critical habitat for brook trout, wintering deer herds, and other species, and much of it lies within the viewshed of the Appalachian Trail.

Logging roads and other unimproved tracks crisscross the corridor’s proposed route, including here, where the corridor would cross Enchanted Mountain Road in front of Johnson Mountain. In May, the state Department of Environmental Protection ordered that the maximum width of the Section 1 corridor be 54 feet, reduced from 150 feet in the original proposal.

The project has already cleared regulatory hurdles with state agencies, including the Maine Public Utilities Commission. This spring, corridor opponents submitted enough signatures to place a referendum on November’s ballot giving Maine voters the option of overturning the PUC’s approval. Political committees supported by CMP and Hydro-Québec spent nearly $20 million this year on polling, marketing, and advertising (including in this magazine) to influence the ballot measure’s outcome. Then, in August, the Maine Supreme Court ruled the measure unconstitutional. It will not appear on November’s ballot, and the New England Clean Energy Connect now only awaits approval from the U.S. Army Corps of Engineers and U.S. Department of Energy.

With federal permits pending, opponents continue to fight the corridor in court and via agency appeals. Signature gathering is underway for a replacement ballot measure, looking to 2021. Meanwhile, the company formed to execute the project has already issued hundreds of million of dollars in contracts to begin land clearing and construction along the back-of-beyond transect that planning documents call Segment 1.

The contoversy over the corridor has continued to develop since this story was published in the November 2020 issue of Down East, with further federal permits issued, further construction undertaken, a court ruling invalidating a state permit to build on a section of public land, and a new referendum on the November 2021 ballot. Maine Public’s explainer is a good place to start to catch up on the details as the story continues to unfold.

The corridor would cross the South Branch Moose River, one of some 280 stream crossings that have prompted criticism from the Maine Council of Trout Unlimited, among others. The DEP has ordered CMP to preserve forest canopy where brook trout habitat relies on shade and downed trees. The agency also required CMP to commit nearly $1.9 million for culvert replacement projects, in the name of mitigating impacts on fish habitat.

Looking west toward Greenlaw and Three Slide mountains, in the Boundary Mountains range, southwest of Jackman. The corridor would cross the border some 15 miles west of this spot, as the crow flies, near Quebec’s Lac Mégantic.

A nameless tributary of Gold Brook, which the corridor would cross, just downstream. This area contains critical habitat for endangered Roaring Brook mayflies and northern spring salamanders, which the state lists as a species of special concern. Because of this, the project would utilize taller poles here to preserve forest canopy.

The corridor would pass within 1,600 feet of Moxie Falls, a popular destination for hikers, though lines and towers wouldn’t be visible from the falls. Moxie Stream meets the Kennebec River less than a mile downstream from where CMP would bury lines under the scenic Kennebec River Gorge (rather than hanging them above, as first proposed). The corridor east of the gorge would be visible from the Appalachian Trail on Pleasant Pond Mountain, one of several points along the AT where viewshed concerns have helped spur opposition from the Appalachian Mountain Club.

Another view of the South Branch Moose River. Its headwaters tumble off Caribou Mountain, a few miles southwest, nestled against the Canadian border in the Nature Conservancy’s new Boundary Mountains Preserve, designated this summer.

Moxie Pond, from Lake Moxie village, a quarter mile from where Section 1 would meet the existing, expanded corridor.

A boat launch and a few campsites attract anglers to Rock Pond. The new corridor would pass 1,000 feet from the shore, with several towers looming over the pond. CMP has committed to tapering vegetation to minimize visibility.

Enchanted Mountain Road — here, looking east, toward distant Big Moose Mountain — is named for the remote ski hill it once accessed, which closed in the ’70s. Snowmobilers use portions of it to access the state’s highest groomed snowmobile trail, on 3,717-foot Coburn Mountain, from which the corridor would be conspicuous in winter.

Read more about the New England Clean Energy Connect from the project’s backers and its opponents. Explore the locations of all the images from this feature, and the route of the proposed corridor, on the Google Map below.