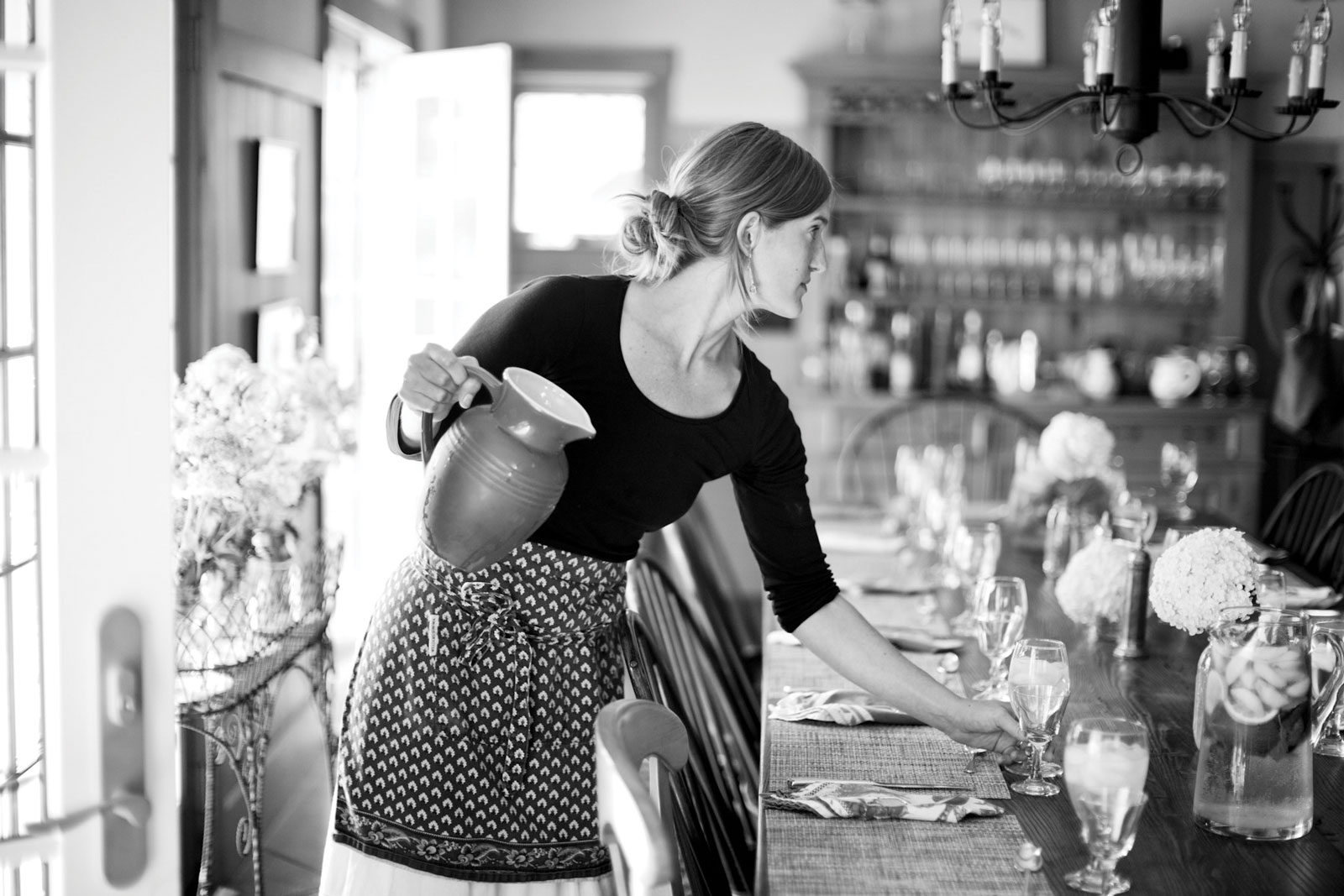 When I moved to Maine from New York City 10 years ago, my bags were packed with a chef coat, a knife kit, and my culinary school diploma. But I didn’t really know how to cook — not in a practical way. I had worked in restaurants under some of America’s top chefs, been paid top dollar as a personal chef for Manhattan’s elite, styled food for television, and worked at glossy food magazines. But none of this qualified me to teach anything to home cooks.

Then I met a woman who’d grown up on a community farm in Maine and worked alongside her mother in the kitchen of a catering operation. She could grow just about anything that Maine soil could tolerate, and she cooked in a way that was practical and personal. I watched her shape loaves of bread with patience and care, slaughter and butcher chickens with grace, and cook in cast iron with confidence. She was the definition of an accomplished home cook, with a deep appreciation for the earth that feeds us. Her approach was inspirational, especially to someone who’d spent the last decade working in stainless-steel kitchens under culinary egotists. We worked together for three years at Salt Water Farm, my cooking school in Lincolnville, where we built programming that focused specifically on country cooking.

In the years since, the offerings at Salt Water Farm have grown significantly, but the focus is still on giving home cooks the tools to feel more confident in their own kitchens. My new cookbook, Modern Country Cooking, is an expression of the school’s mission, with a comprehensive guide to our style of home cooking and 75 seasonal recipes. As I write in the introduction, country cooking means a few different things to me: “First, it means growing some, not necessarily all, of your own food, establishing a deeper connection with the earth and sea that provide us with nutrients. Second, it means revisiting the basics of food production: making bread, butter, yogurt, stocks, pickles, preserves, and pie dough; cleaning and storing vegetables and herbs from the garden; cleaning mushrooms; fileting fish; butchering poultry; and more. And finally, there are what I call the country cooking basics: cooking in and caring for cast iron, reaching for a mortar and pestle rather than a food processor, correctly sharpening and using a knife, and cooking over fire. There is something empowering in understanding and appreciating these skills, feeling a sense of usefulness once they are acquired.”

At home, we alternate between brothy meals of beans and greens and big bowls of crisp, hearty leaves, sprouts, and herbs.”

Springtime in Maine feels like the longest-awaited season, and if you blink, you can miss it. In the book, I describe what’s precious to me about this stretch of time, both in nature and at home in the kitchen: “Snow melts on the mountains, channeling ice-cold water into the streams and out to sea. Cormorants perch on river rocks and branches that hang over the riverbeds, waiting patiently for the alewives to run. When they finally do, the rivers swell with fish, or so the legend has it. A walk through the Maine woods on a cool April morning smells and sounds of rebirth.”

“At home, we alternate between brothy meals of beans and greens and big bowls of crisp, hearty leaves, sprouts, and early perennial herbs. At the local shops, I buy every new, green, fresh thing I can get my hands on: containers of microgreens from nearby greenhouses, bags of spinach and arugula, even fresh-dug parsnips that have been preserved and sweetened in the earth throughout the entire winter. The savory smell of chicken stock with fresh bay is ever so familiar in our home during mud season, a sort of mood-boosting potpourri.”

While many cookbooks are photographed in one tiresome week, we were able to shoot this book over the course of an entire year, to really capture the essence of each of Maine’s seasons. (My friend and photographer Kristin Teig has not only shot both of my cookbooks but has documented Salt Water Farm since it was founded.) Country cooking, as I’ve learned it in Maine, is as patient and as full of grace as those seasons. As I write in the book, “There is no need for discouragement or disappointment in a home kitchen. There is always another path to feeling satisfied and accomplished with the meal you lay down on the table. Indulge your sense of culinary exploration and find comfort in the forgiving nature of home cooking.”

This simple meal of grains, greens, and vegetables is dressed in a bright and brilliant buttermilk dressing, making each spoonful a pleasure. It’s the type of dish that will sit comfortably in the fridge until the next day, and even the day after that, it asks only for a little more dressing, a sprinkle of sea salt, and a handful of fresh arugula with each new serving. While you could riff on this dish with a number of spring vegetables, greens, and alternative grains, this combination is pretty stellar.

zest and juice of 1 lemon

Bring a large pot of salted water to a boil. Add the farro and cook until al dente according to the package instructions, anywhere from 25 to 40 minutes. Strain, dress with a little olive oil, toss, and reserve.

Snap the ends off the asparagus, then cut the asparagus into ½-inch pieces. In a cast-iron pan, add 1 tablespoon olive oil and warm over high heat. Add the asparagus and a pinch of salt and cook until it turns green and just begins to soften, 4 to 5 minutes. Move to a plate and let cool. (Do not overcook.)

To make the dressing: Place the garlic in a blender with a pinch of salt. Buzz until it’s completely broken up. Then add the buttermilk, crème fraîche, lemon zest and juice, parsley, chives, tarragon, and olive oil. Blend until the dressing is an even consistency. Add salt, pepper, and red pepper flakes to taste.

In a large wooden bowl, toss the arugula, farro, asparagus, and 4 tablespoons of dressing. Then add the sprouts and give a final toss. Taste to see if the salad needs more dressing. Serve at room temperature.

A well-stocked pantry isn’t complete without a few mason jars of hearty grains such as wheat berries, farro, freekeh, and bulgar. Experiment with these by filling a pot with salted water and adding a cup or two of the complex grain. Follow the cook time on the package and taste the grain throughout to get a sense of the doneness. Complex grains tend to fill our bellies quicker than processed ones, so we need less of them to complete a meal. I often find use for a cup of cooked grains in a salad or in a soup.

One of our more popular classes at Salt Water Farm is a Catalan cuisine course in which wood-fired paella is the featured dish. The students always marvel at how the whole dish, from start to finish, can be cooked over an open flame. Historically, this dish was made over a campfire in a farmer’s fields with spare vegetables and proteins from the field (hare and yard birds). It wasn’t until much later that it became a coastal dish, showcasing fish and shellfish from the Mediterranean.

Heat 2 tablespoons of olive oil in the paella pan over medium/high heat. Brown the sausages on both sides, about 5 minutes per side. Remove them from the pan and set aside. If using, add the shrimp to the pan. Cook until the shells turn pink, flavoring the base of the pan, and then remove and reserve. Once the sausages cool, cut them into 1½- inch pieces and reserve.

Add the onions and garlic to the pan with a pinch of salt and cook over medium heat until soft and translucent, about 10 minutes.

Add the tomatoes and saffron and continue to cook another 10 minutes, until slightly reduced.

Add the white wine and cook down slightly, about 5 minutes.

Add the rice, salt, and 4 cups of stock and give it a quick stir. Bring to a boil, then simmer on low heat for 10 to 15 minutes. You don’t want to move the rice around the pan at this point. You simply add a little stock as the rice cooks and absorbs the liquid.

Over the course of 25 minutes, slowly add an additional 5 cups of liquid (as needed), making sure that the rice is cooking without burning or drowning in liquid.

About 15 minutes before the paella is fully cooked, disperse the clams and sausage over the top. (The clams take the longest to cook and the sausage should still be raw at the center.)

About 10 minutes before the paella is finished, add the mussels, squid, shrimp, and peas. The heat will cook the clams and mussels to the point of opening and warm the already cooked peas. If the shellfish do not open, give them another couple of minutes, and if they still don’t open, discard them. At this point, the rice should be fully cooked and developing a crust on the bottom of the pan. No more liquid is necessary.

Once the seafood and rice are fully cooked, garnish the paella with parsley and lemon wedges. Serve with a big wooden spoon.

I’m always looking for a great rhubarb recipe, as it can be so abundant in the spring. What makes this cake unique is the interesting combination of the nutty flavor of the rye flour and the tartness from the rhubarb compote: it can’t be beat!

FOR THE RHUBARB COMPOTE

Preheat the oven to 350 degrees. Butter and flour a 9-inch springform pan and line the base with parchment paper.

To make the rhubarb compote, place all of the ingredients into a medium saucepan and place over medium-high heat. Bring to a boil, give a stir, and let it cook for 20 to 25 minutes or until the compote has a jam-like consistency. Let cool.

Combine the flours, baking powder, baking soda, and salt in a medium mixing bowl and whisk to combine.

In a stand mixer, beat the butter and sugar until light and fluffy.

Add the eggs, one at a time, scraping the sides of the bowl between each addition.

Add the almond extract and mix.

Combine the milk and the orange juice in a small liquid measuring cup.

Pour the batter into the springform pan. Then pour the compote on top. Using a spatula, swirl the compote into the batter using a circular motion. Place the cake on a sheet pan and move it into the oven for45 minutes. Check for color. If the top is browning too quickly and the middle hasn’t set, place an oven rack on top of the cake and an additional sheet pan on top of that to protect it from direct heat. Cook for another 15 minutes or until the cake is completely set. Remove from oven and let cool for 20 minutes.