Maine’s Dirigo Vintage Base Ball Club is a sepia-toned study in local color.

[S]hoeless Jake has his knickers in a twist. The round-faced, 29-year-old president of the Dirigo Vintage Base Ball Club — known off the field as Jacob Newcomb — glances around nervously. He’s umpiring today’s game at the New Gloucester Fairgrounds, between Dirigo and the team’s in-state rivals, the Presumpscot Base Ball Club. And he’s just realized that he’s committed a major uniform faux pas.

“I forgot to take my collar off,” he says sheepishly.

Vintage baseball might resemble a Colonial Williamsburg reenactment, but it’s a real sport, with real rules and regulations — and as umpire, Shoeless Jake is supposed to know them. The rules date back to 1861, and they’re not always intuitive. For example: The striker is out . . . if a fair ball is struck, and the ball is caught either without having touched the ground, or upon the first bound. That “first bound” provision is absent from contemporary baseball, but it’s a godsend for Dirigo’s fielders, who aren’t allowed to wear gloves.

Shoeless Jake must also master period terminology, yelling “Striker to the line!” instead of “Batter up!” and “Two hands dead!” instead of “Two outs!” And on top of everything else, he’s supposed to wear authentic period dress. That’s where Shoeless Jake messed up: no umpire of the 1860s wore a collared shirt. 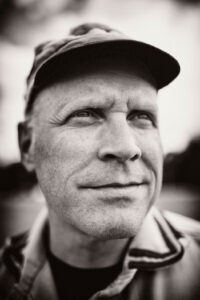 Shoeless gets a ribbing from teammate Kevin “Irish” Sullivan, who dubs him “the great and honorable Reverend Jacob Newcomb.” But Jake is more concerned about the criticism he’ll endure because of something his Civil War–era forebears never had to contend with: the Internet.

“One time we posted a video online where I made a ‘safe’ sign,” Shoeless says. “Someone pointed out that the ‘safe’ call wasn’t actually made until the 1880s, when there was a deaf player. So I felt kind of embarrassed about that. It seems like anytime you make a historical mistake, it gets captured.”

Captured and noticed by whom, you might ask? By the several thousand vintage baseball obsessives haunting the Web and makeshift diamonds across America. Dirigo is Maine’s lone member of the Vintage Base Ball Association, which has about 130 teams nationwide. (The Presumpscot club, based in Westbrook, is an informal offshoot of Dirigo.) As the collar incident illustrates, the sport combines the low-key competition of a men’s softball league with the geeky neuroticism of a Star Trek convention. In other words, it’s not enough to get your game face on — you also have to get into character.

[W]hen did so many grown men start donning costumes, prancing around ball fields, and gibbering at each other like a regiment of Billy Yanks? Maine’s first documented game of vintage “base ball” (purists call it by its old-school, two-word name) was organized in 2005, by the Washburn–Norlands Living History Center in Livermore. The center invited the 3rd Maine — a nonprofit educational organization that stages Civil War reenactments — to face off against a visiting team from Massachusetts. It was fun, remembers the 3rd Maine’s Mark Rohman. “We said ‘Hey, we gotta join one of these teams in Maine.’ That’s when we discovered that there were no vintage teams in Maine.” 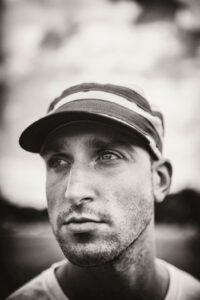 So Rohman started one. It was fitting that a Civil War reenactor should bring organized vintage baseball to Maine, since it was returning Civil War regiments who spread the sport across the state in the first place (prior to that, Mainers had played a slightly chaotic, proto-version of the game called “roundball,” in which outfielders actually lobbed the ball at the runner). Rohman, who lives in Augusta, named the new club after the Augusta Dirigos, who dominated the new sport in Maine in the late 1860s, going so far as to win an informal New England baseball championship in Massachusetts in 1869. At the time, baseball teams were sprouting up all over, and the Dirigos’ competitors included the Oaklands of Gardiner, the Spartans of Winthrop, the Odd Fellows of Kents Hill, the Unions of Lewiston, the North Stars of Portland, the Kennebecs of Hallowell (or was it the Hallowells of Kennebec?), the Eurekas of Riverside, and the Passagassawaukeags of Belfast (about whom a 1930 article in the Lewiston Evening Journal noted, “This last name was so long that it ran almost around the body of the baseball uniform.”).

Eventually, Rohman stepped back because of time demands, but others, like club vice president John “Lefty” Coray, have since kept the club’s mission alive.

“I also play in a men’s adult league,” says Coray, who lives in Bath, “and it’s fascinating to go back and forth and play by both sets of rules. You think of the skill set that we all grew up with as baseball players, and yet we still struggle with this game. I can just imagine what it was like in the 1860s, when it was just a bunch of blacksmiths and millworkers trying to learn how to play.” 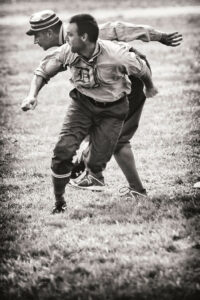 Today’s Dirigo players range from educators (Newcomb teaches social studies at Medomak Valley High School) to engineers to sales reps, drawn to the game by their love of history, baseball, or, in most cases, a combination of the two. And because players of vintage baseball also tend to be vintage baseball players, just stepping up to the plate involves some measure of risk. Stretching before the game, 55-year-old Rob Rodriguez of Cornish admits, “There’s a fine line between warming up and hurting myself.”

In addition to overcoming the game’s physical challenges, older players have to unlearn a lifetime of 20th- and 21st-century baseball. Dirigo’s pitcher (known as a hurler), Bob “Badger” Hubbard, faces the most difficult adjustment. Instead of firing overhand fastballs, trying to make the batter miss, a vintage pitcher delivers the ball underhand, slowly, to make it as easy to hit as possible. As such, strikeouts are rare.

“To play one way your whole life and then have to switch on the fly isn’t easy,” says Dirigo catcher Sullivan. In the 1860s, the catcher was actually called the behind, inviting a series of predictable jokes. “But that’s part of the appeal. You have to stop and remember, ‘Wait, I’m in 1861 now. I have to do things differently.’”

[B]ut the greatest challenge for the players is often the same as for umpire Shoeless Jake Newcomb: finding the right clothes. You can’t just order team T-shirts from a screen printer. Nor is it easy to find a truly authentic 1860s uniform — not that you’d necessarily want one during the humid Maine summer. 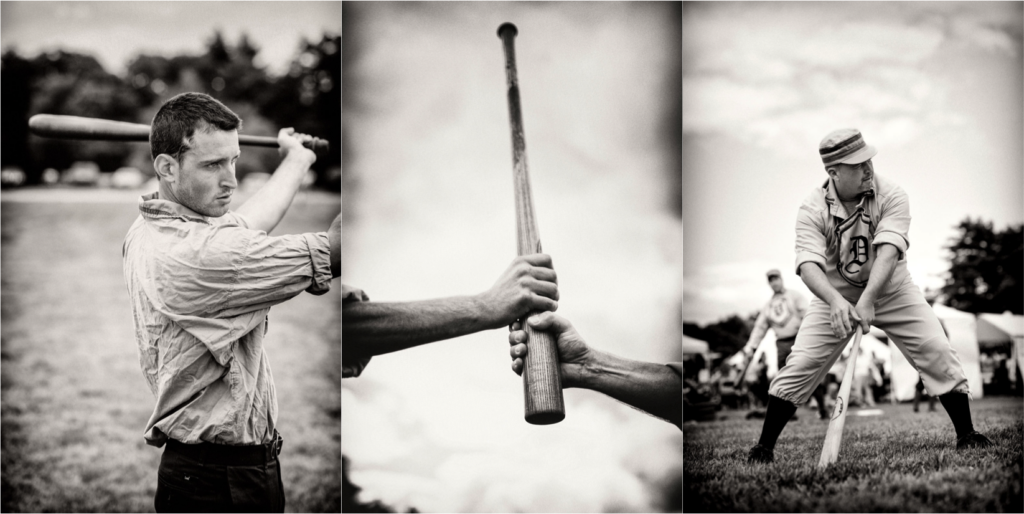 “We were looking at wool,” says Presumpscot captain Jeremy Gardiner, “but that’s not gonna happen.”

A complete vintage uniform from a specialty manufacturer costs around $200 and takes several weeks to deliver. For more committed players like Shoeless Jake, the investment is a no-brainer. Who would dream of running the bases in anything but knee-length knickers?

But the Dirigo club, like many teams, also depends on a rotating cast of recruits from conventional baseball and softball leagues — younger players, mostly, who are reluctant to go all-in until they decide whether they’re sold on the vintage game. So their uniforms aren’t uniform. Some guys put on plain dress shirts with regular pants, rolled up to the knee to kinda-sorta look like knickers. And it’s a safe bet that no strapping young Mainer who indulged in a game of ball at a Civil War encampment ever wore a pair of shoes embossed with a Nike swoosh.

But if some players arrive at the fairgrounds wearing patchwork uniforms and an air of halting self-consciousness, they look a lot more comfortable once the game begins. The younger players just play, leaving the hardcore vintage veterans to shout things like, “Well, played, sir!” and otherwise create a period ambiance.

It’s a hard ambiance to maintain, even in a quaint setting like an old fairgrounds. On game day, the New Gloucester Community Fair is teeming with visitors who come for the rides or the petting zoo or one of several other attractions besides the game. For the players of Dirigo, distractions abound. A steady stream of traffic files in from Bald Hill Road. Cars line the edge of the outfield (or the garden, in vintage parlance). Even the swing music drifting over from the midway strikes a wrong note. The Glenn Miller Orchestra’s “In the Mood” gets the ballplayers out of the mood, seeing as it’s about 75 years ahead of their time.

In short, modernity keeps butting in. In fact, it plays a role in the game’s very first run (or tally). Dirigo has a man at first when Scott Hastings, aka “the Professor” (he wears glasses), steps to the line in the third inning. And huzzah! The striker smites a mighty drive deep into the garden . . . whereupon it caroms off a Buick LaCrosse.

The anachronistic, fortuitous bounce enables the Professor to make three bases and send the tally home. And in an odd way, the Buick’s intrusion even falls within the spirit of ’61. You see, says Hubbard, back in those days, there were no fences to swing for: “They just threw down some bases wherever they were and played.” So obstacles in the outfield — trees, fence posts, four-door sedans — are all part of the vintage baseball experience, just as they were in the 1860s.

[W]atching vintage baseball is a little like watching the Red Sox in their throwback uniforms. After a while, you stop noticing the period garb and just follow the game. You want to see who’s going to win.

In New Gloucester, the outcome is in play throughout. It’s a brisk match with minimal muffins (as errors are called). Presumpscot rallies for two tallies, but in the end, Dirigo prevails 3–2, an unusually low score by vintage standards.

After the last hand is dead, following vintage baseball tradition, Presumpscot captain and Westbrook native Gardiner tries to hail the victors with a rousing 19th-century cheer. Except he can’t quite remember how it goes.

“Um . . . one, two, three — huzzah!” shouts Gardiner, sounding uncertain. The chorus of “huzzahs” behind him is muted and discordant. Gardiner pauses and frowns.

But like a ball bouncing off a Buick, Gardiner’s mistake turns out to be a happy accident — it punctures the stiltedness, gets even the newcomers to laugh and relax. So when he takes a second swing at it, the enthusiasm on the field seems genuine.

And just for an instant, the spirit of ’61 echoes across the field.

Subscribe to our newsletters to get the best Maine travel, culture, and dining stories (and photos) each week.