At Bubba’s, est. 1961, kitsch is king, retro is respected, and celebration is sacred. A tribute to Maine’s wildest, most beloved dive. 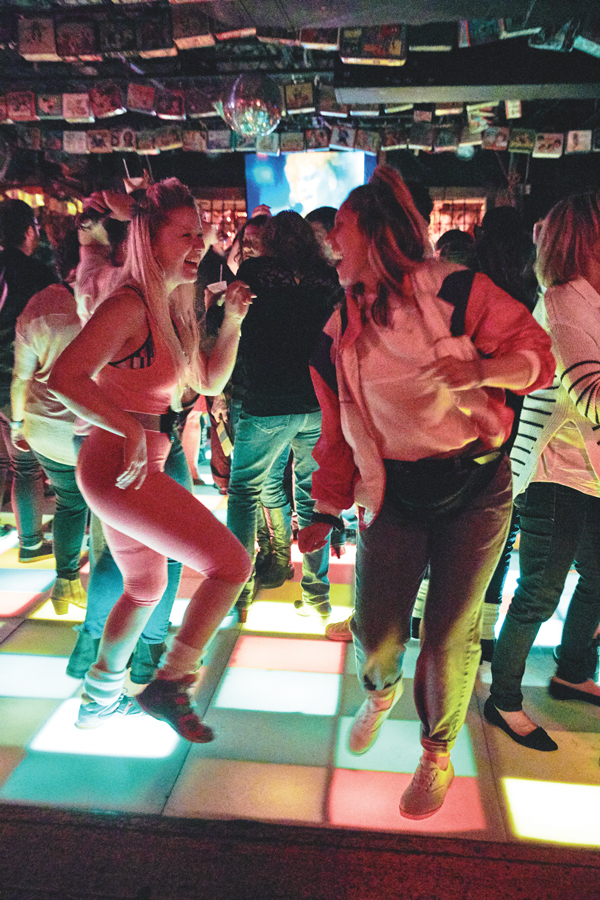 You grab your DayGlo Scrunchie and your teal-blue eyeliner. Or maybe your acid-washed jeans and your cut-off sweatshirt. Or maybe you pop the collar on your pastel Oxford, then slip on your Ray-Ban Wayfarers. Whatever your getup, it’s the end of a hard week — maybe the end of a tough month, possibly the end of a grueling year — and you’re ready to escape. You’re going back in time in the DeLorean that is Bubba’s Sulky Lounge.

Maybe you’ve been coming to Bubba’s forever. That’s possible, because Bubba’s has been around a long time. Or maybe you’re new here, and you came tonight because you read somewhere that it’s America’s seventh-best dive bar.

Either way, once you step inside and see the spectacle — the shiny, raucous, unremitting sensory overload — you’re hooked. You burst into a cheek-to-cheek smile that doesn’t leave your face all night. A dozen or more rusted tricycles dangle from the rafters in a cavernous back room. A convoy of old toy trucks parades across the front bar. The coatroom’s filled with hulking pot-bellied stoves, a suit of armor looms in one corner, and mannequins lurk in various other nooks, posing in old-timey barbershop dioramas.

“And I got all them lunchboxes,” owner Robert “Bubba” Larkin points out. Indeed, a pop-culture yearbook of vintage lunchboxes — Peanuts, Hot Wheels, Star Trek, KISS — dangles from the ceiling like a strand of clunky patio lights. If you don’t spot your fourth-grade favorite up there, don’t worry — Bubba will add it soon.

“I have a barn next door loaded with stuff,” he says. “When I bought the building, an antiques store had been in here for 50 years, and I helped the owner move her things out. Maybe that’s why I like antiques.”

The “mayor of Portland Street,” as Bubba has been called, is a retired Marine, former high-school basketball star, and proud owner of 14 race horses (hence the bar’s name — a “sulky” being a two-wheeled, jockey-toting cart used in harness racing). Bubba’s tall and soft-spoken, a lifelong Portlander who doesn’t like talking about his age but is somewhere in the neighborhood of 80. He opened Bubba’s in 1961, rebuilt it after a fire in 1981, and put in the light-up dance floor sometime thereafter (no one quite remembers). He stops in daily, often adding this or that to the decor.

And even as its interior has perpetually evolved, Bubba says his place and the post office are the only two remnants of the strip he remembers from the ’60s. In an otherwise fluxy Bayside neighborhood, Bubba’s plain, brown-brick exterior has been a drab, boxy constant. To look at it from the street, you’d never guess how much fun people are having inside.

Winter is when Bubba’s really thrums, a glowing refuge of oddball bonhomie on bitter, frozen nights. New Year’s Eve is the second-biggest night of the year (the first is Halloween), with revelers lined up outside, hoping not to be turned away once the bar reaches capacity: 500 shiny, happy people, dressed their best and toasting champagne at midnight under a massive web of Christmas lights and thrift-store holiday tchotchke.

But the real week-to-week draw is ’80s night on Friday, packed with partiers in full-on Reagan-era regalia (a retro outfit saves you the $5 cover charge). Here, a middle-aged guy in a Miami Vice blazer and shades; there, a retiree in a Bon Jovi tee and fishnets. Here, a fellow in a late-disco/B-boy–era track suit and three-stripe Adidas; there, a gaggle of millennials with their neon stretch pants and side ponies.

Coming to life is what you do at Bubba’s on a frozen Friday night. You head out on the dance floor with the diehards the minute the music starts.

The staff at Bubba’s greets regulars by name. Here’s Zoo Cain: artist, Vietnam vet, and beloved recovery counselor, clad in rainbow socks and making a triumphant return to the dance floor after battling cancer. Zoo, 65, discovered Bubba’s five years ago, after his marriage had ended and his kids had grown up and left home.

“I just needed to get out and go dancing,” he says. “I’d go and dance for three or four hours straight and leave completely soaked with sweat. It was like running a marathon. Young guys try to duel on air guitar with me, thinking they’re going to burn me out after five songs, but two hours later, they’re back in their seats, and I’m still going strong.”

The 92-year-old gentleman in the natty blazer? That’s Norman Jaber. Find him dancing beside his regular table almost every weekend with Geri Elliott, his third wife (he’s her fifth husband).

“Norm dances like the two mechanical Santas that come out around Christmas,” says Reggie Groff, a fellow Bubba’s fixture. Reggie ran Bubba’s karaoke night in the early ’90s in trade for a few parking spaces for the employees of his video production business, down the street. Back then, Bubba’s had a rough-and-tumble reputation. “The first night I worked there,” Reggie remembers, “a fight broke out, and one of the bouncers lay unconscious on the floor in front of me. I was holding the table down so the equipment I’d rented wouldn’t get ruined, while this girl, Kim, sang — I kid you not — ‘Killing Me Softly.’”

Maryjane McInnis Hubbard remembers those days too (the “blood and guts” era is what Zoo calls it). She’s 52 and has been coming almost every week since she was 21. These days, she sometimes brings along her thirtysomething daughter. At some point, she says — and other regulars seem to agree — the brawling just sort of died down, and the place was reborn. Bubba’s, like a lot of bars with long histories, is a kind of phoenix, reinventing itself every so often from its own ashes. These days, it’s known to be safe and cheery, if still a little wild. And unlike a lot of Old Port bars, Maryjane points out, it’s no meat market, no pick-up joint: people are just here to have fun.

Christine Arsenault decided she had to work at Bubba’s the minute she first stepped inside, and she’s tended the back bar ever since. One winter, when her pipes burst at home, five Bubba’s regulars showed up to dig through her foundation. Bubba himself helped her refinance her house. Zoo calls her “the sweetest bartender on the planet.” A few years ago, he showed up at the bar a few days before Christmas with a present for her, never mind that it was frigid outside and he was wracked from chemo.

“It was 11:30 at night,” he says, “and I was wearing just a bathrobe and cowboy hat, and I went into Bubba’s and plunked the gift down for her on the bar — and nobody blinked. I probably looked like one of Bubba’s mannequins come to life.”

Coming to life is what you do at Bubba’s on a frozen Friday night. You head out on the dance floor with the diehards the minute the music starts, just before 9 p.m. You find a couple in sensible shoes holding hands and jumping up and down like kids to Bobby Brown’s “My Prerogative.” Eventually, someone grabs the cast-iron railing dividing the main dance floor from the mezzanine and does an impromptu, seductive cage dance to Guns N’ Roses. When Huey Lewis comes on, a guy next to you practically levitates. (“Humans need to dance,” Zoo insists.) 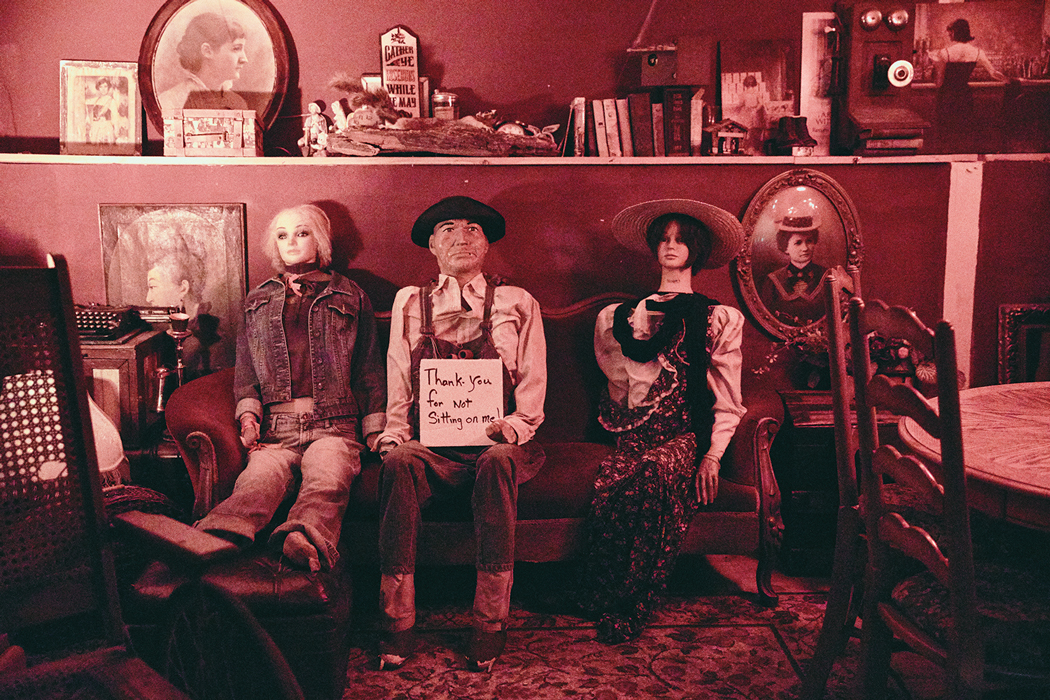 By 11, you can hardly squeeze onto the illuminated Plexiglas tiles next to the DJ booth. By 11:30 — as Earth, Wind & Fire segues into Aerosmith into Prince into the Eurythmics into AC/DC — the crowd is singing along at the top of their lungs, and you can’t remember when you were ever so joyful, so harmoniously attuned to your fellow humans. Sure, maybe it’s the plastic cups full of Long Island Iced Tea. But you suspect it’s something more.

Still later, while you stand in line for the bathroom, complete strangers compliment not only your outfit but your physique, your dance moves, your very existence. They love you. You love them. You all love Bubba’s. Like, totally. To the max.

Our Favorite Maine-Themed Advent Calendar Is Filled With Amazing Chocolate