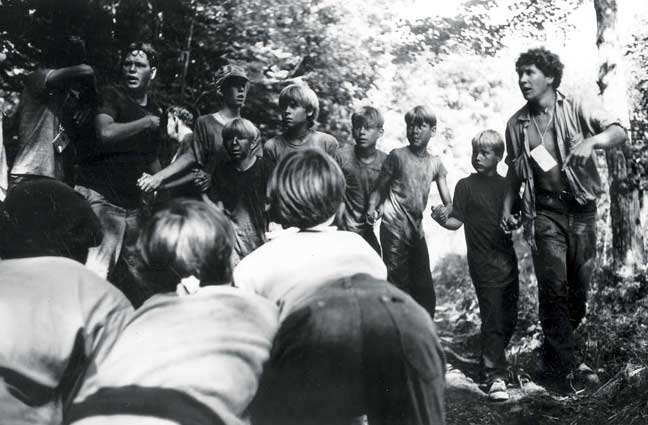 For one hundred summers, Pine Island Camp has engaged in a complex battle of deception and strategy.

[L]ast summer I took a stroll around Pine Island, a small camp in the middle of a lake outside of Belgrade, Maine, where I spent five idyllic summers. It wasn’t a long walk — the narrow island is only about five hundred feet from tip to tip. From afar, the isle looks like a bathing stegosaurus, its hunched spine and curled tail bladed with tall conifers and a smattering of gabled roofs. The camp that occupies the island has been in continuous operation since 1902, and over that time remarkably little has changed: the campers still live in canvas tents without electricity, running water, and electronic or motorized playthings.1 Normally at this time of day the boys could be seen diving off the floating dock out in the cove, whittling, skimming faded back-issues of National Geographic in the library, or pelting one another in a form of dodge ball they call “dust ball.” But that day the island was strangely quiet. I peered into a tent or two and found clusters of campers huddled in secrecy, like smugglers. I spotted rolls of gray duct tape, blue bandanas, piles of camouflage. Here and there, like the flittings of a bird through dappled shade, I heard a single word: “War.”

The War Game, now in its one-hundredth year, is a two-day-long game of military strategy Pine Islanders play in the woods on the mainland at the end of every camp season. Despite its bellicose name, the game involves no physical contact or mock violence. It does, however, involve running, scheming, manipulation, and intense focus as well as more old-fashioned skills like laying in wait, getting bitten by mosquitoes, and following orders. Something so grueling and slow shouldn’t enthrall today’s digitized youth, and yet it does.