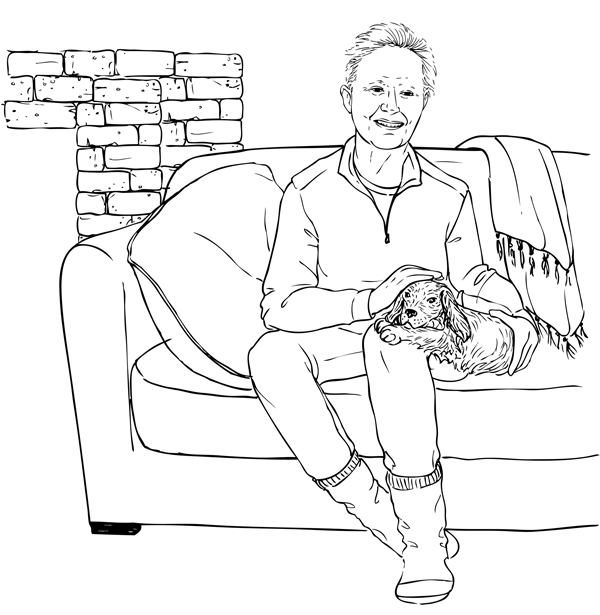 Illustration by Christine Mitchell Adams
The first time I drove out Merepoint Neck, in Brunswick, I noticed the trees growing thicker and thicker, the homes getting farther and farther apart with each mile. A wooden plank nailed to a tree directed me down a winding driveway to Phyllis Austin’s house. Phyllis greeted me at the door, led me into the living room, and lowered herself onto a couch padded with foam cushions and woolen blankets. “I’m an old person,” she said, shifting her limbs with care, resting one hiking-sock–clad foot over the other. This is where she liked to cocoon, with a picture window looking out on the bay and a fireplace glowing across the room. Her dachshund, Lark, circled from my lap to hers.

What Austin most wanted to talk about, I came to understand, was death.

Although I hadn’t met her before, I knew Phyllis by reputation: intrepid journalist, noted feminist, staunch environmentalist. She agreed to have me over in the spring of last year — a little tentatively, I sensed — so that I could profile her for a class at Bowdoin College about women and journalism and the way writers have tackled gender issues in their own lives and in their published works. So I figured I knew what we’d talk about: her trailblazing work in environmental reporting, a field once dominated by men; her long tenure at the Maine Times, the progressive alt-weekly, now defunct, that published the word “vagina” before other Maine outlets would countenance such salacious language; and maybe even academic theories, like ecofeminism, that seemed to jibe with her career.

Quickly, though, I realized I was wrong. Phyllis, at age 74, wasn’t interested in a retrospective and didn’t want to talk much about any of that. Sure, she said, she was a feminist, but she didn’t think of her writing as an act of feminism — and she didn’t seem interested in reconsidering it in that way. Instead, she was looking ahead, and what she most wanted to talk about, I came to understand, was death.

As I closed my notebook at the end of our first meeting, Phyllis stopped me. “You should know about an important date in my life — February 19, 1984,” she said. That day, she was cross-country skiing at Pleasant Mountain, in Bridgton. The snow was slushy, and coming fast around a bend, she crashed into a tree limb that impaled her abdomen.

She showed me accounts she’d written of the accident, including one for the Washington Post: “When the pain exploded, it hurled me into an altered state of reality. I could clearly sense myself relaxing my grip on life. I shifted beyond the pain, moving to the center of a vast nothingness. On the right side of center was the place I had come from, and on the left was a different, unknown space. Existence was that simple for seconds.”

A friend had rushed Phyllis to the hospital, and she survived, but barely. As years passed, the effects of the injury persisted, and Phyllis underwent many operations to address complications, each procedure creating more internal scarring. Just recently, her doctor told her she couldn’t sustain more surgery. She’d spent a long time writing about trails, and she sensed the end of hers.

The next time I drove to Phyllis’s house, I was thinking about the other motive I had for picking Phyllis as my subject, beyond the parameters of the class assignment. She was an accomplished journalist, and I was increasingly sure I wanted a similar career. Plus, I knew that, like me, she was a native Southerner who’d fallen in love with Maine’s woods, waters, and mountains. But she decided a long time ago to stay, and I still felt a nostalgic pull homeward, to Atlanta, a place I had purposefully left. I hoped that talking with Phyllis might help me focus some of my shifting thoughts about home and where to try to live and write after college.

“I was conceived in Maine,” Phyllis joked, when I raised the issue. She was born to live here, she meant, even if she wasn’t born here. She told me about how, as a child, she rose through the ranks of the Girls’ Auxiliary in her rural North Carolina hometown, from maiden to lady-in-waiting to princess. She thought she might grow up to do missionary work, but in college, at a Baptist women’s school in Raleigh, she turned apostate.

She threw herself into journalism instead, first at a small-town weekly, then at the Raleigh paper, where she penned a society column. She got a job with the AP in South Carolina, where every day she had to put on a dress, high heels, and gloves before going out to cover civil rights marches, Martin Luther King Jr. speeches, and police crackdowns.

Phyllis’s South was full of holy rolling, racism, and oppressive notions of a “woman’s place.” One of her ancestors, she told me, fought for the Confederacy. All of which is to say, after the AP posted her to Maine in 1969, she had no interest in going back. A few years later, her bosses asked her to head up the Mississippi bureau, a significant promotion, but she refused. From the moment she arrived here, she said, she “knew Maine was for good.”

The more we talked, the more I saw that the South I grew up in wasn’t much like Phyllis’s — different places in different times. I’m always equal parts charmed, fascinated, and frustrated by the South. Phyllis’s choice to eschew it was obviously right for her, but the clarity of her decision only made me realize how far I was from a decision myself.

She hadn’t achieved work-life balance, I thought, but something like work-life symbiosis.

I finished my profile of Phyllis, even though we’d strayed pretty far from the intended focus, and in the fall, I left for a semester abroad in the UK. By then, I’d spent many hours with Phyllis and many more reading her work. I felt like we’d come to know each other well, and before I left, I told her I’d stay in touch.

Partway through the semester, I emailed Phyllis photos of a hike I took in the Scottish Highlands, near a trail she’d recommended from a trip a few years earlier. I didn’t hear back right away but figured my message had sifted to the bottom of her inbox. Then, I found out that Phyllis had died. She passed away a year ago this month, a day after her 75th birthday. She hadn’t tried to hide feeling unwell whenever I was with her, but she never let on just how quickly her health was deteriorating.

I reached out to Anne Dellenbaugh, Phyllis’s partner. She told me that complications from Phyllis’s skiing accident had finally overwhelmed her body. Toward the end, Phyllis began a voluntary fast, Anne said, and after six days without food or water, “all of Phyllis’s need to fight the world was gone.”

Phyllis had once remarked to me that “giving yourself to something satisfies the soul.” In Maine and its wilds, she found something she could wholly give herself to. “If I wasn’t writing about it,” she said, “I was paddling down it or hiking up it.” She hadn’t achieved work-life balance, I thought, but something like work-life symbiosis.

Months after Phyllis died, back from studying abroad, I sat in her basement, surrounded by kayaks, snowshoes, and boxes filled with yellowed news clips and typewritten notes. Anne was going to put the house on the market but invited me over first, and I sat there trying to recreate a person from papers, folders, and scrapbooks. I came across an obituary Phyllis had written years earlier for a previous dachshund, Scout. It was sweet and funny, and as I read, I couldn’t help finding it autobiographical.

“Only 11 pounds, he never met any living being (animal or human) larger than himself,” she wrote. “He faced off the biggest dogs and repairmen and UPS delivery trucks. In his early years, adventure was his passion. He jogged on beaches, led me up 3,000-foot mountains and survived two major falls with barely a scratch. I believe Scout was ready to leave this earth. Death always marks a passage. Scout transcended his pain, falling softly out of his aged body into the arms of heavenly grace.”

I last saw Phyllis on a walk through the woods in the Brunswick Commons. She’d gotten an injection at the base of her spine the day before, and as she led me through pine groves and over unsteady footbridges, I noticed that she didn’t wince or limp. She started telling stories of past adventures, and I wondered if she was paying attention to where we were going until I realized she’d adeptly led us in a circle — that we were probably never more than a mile from the car. “I’ve had my swan song,” she said, not wistfully or regretfully, but simply as a matter of fact.

Over the course of our conversations, Phyllis took me in unexpected directions, but we always wound up back at writing and Maine and the contentment she’d gotten from those two things. I still don’t know where I’m headed after college, but I know that I want to emulate the way Phyllis achieved contentment, taking control of her life, building it around her passions. Wherever I wind up, for however long, I’ll carry that lesson from Phyllis, from Maine, with me.