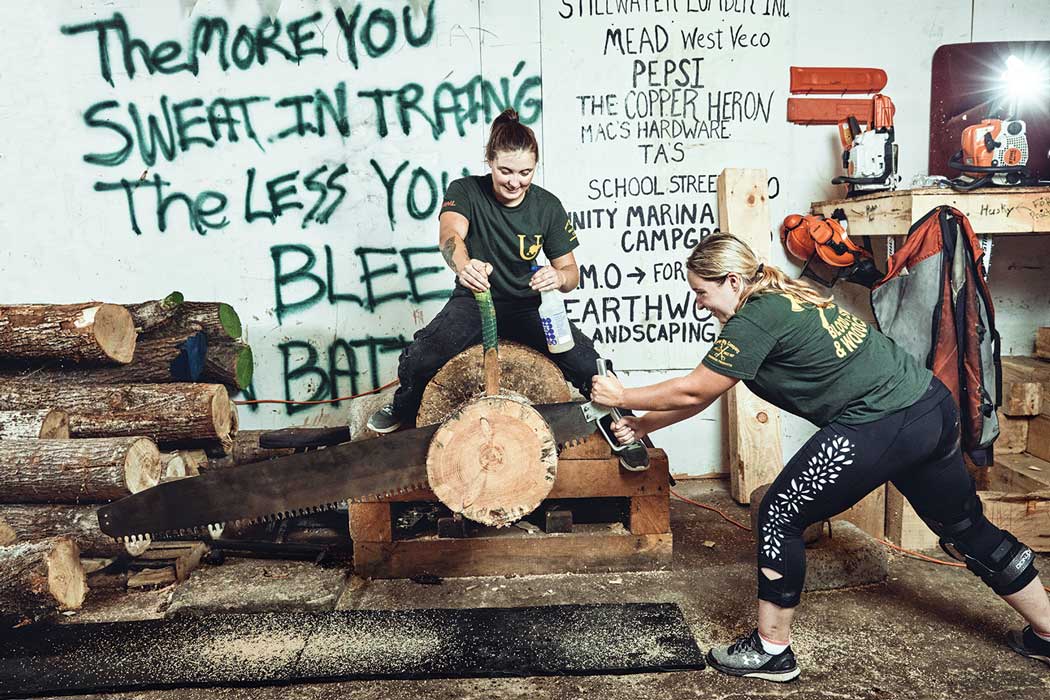 By Will Grunewald
Photographs by Michael D. Wilson

Outside the Unity College Woodsmen’s shed, where the team stashes gear and stockpiles logs, the wood chips started flying as soon as classes ended for the day. An ax sailed through the air and thunked into its target. One upperclassman did the pole climb, his metal spurs click-clacking up a 60-foot trunk, while another drove her saw through the heart of a log.

“This sport, it emulates old-school logging techniques, how they used to do it in the woods,” team president Will Reinsborough explained. “We just do it as fast as we can, against other people.” The vertical chop, cleaving through an upright block, imitates downing a tree. The underhand chop, standing on and cutting through a log, is how felled trees were once segmented. The crosscut, with a two-person saw, made log ends flat.

Another contest, the disk stack, requires chainsawing a block into thin slices without them toppling. “A few of these events probably came from lunch breaks,” Reinsborough clarified, “when you were like, ‘Hey buddy, watch this!’”

Lumberjack-skills competitions caught on at woodsier colleges in the mid-20th century. Unity’s Woodsmen formed in the ’70s (the college was only founded in 1965), and today, dozens of trophies from various meets adorn the school library’s fireplace: a plaque for first place in pulpwood toss, an ax for a women’s chopping win, two rusty saws for log roll triumphs.

Will Reinsborough (center) prefers events that involve axes, but last year, he started competing in “single buck” sawing too. Studying conservation law enforcement, he wants to be a Maine game warden. Click to enlarge.

UMaine and Colby are the in-state competition, and other teams are scattered around New England, New York, and Canada. In Unity’s early days, the popularity of the forestry program drove interest in the Woodsmen, team faculty advisor Pat Clark said. Even though current students are just as likely to study captive wildlife care or adventure therapy, the team still draws steady numbers — 30 to 40 members, from a student body of 700.

Outside the shed, a new recruit practiced underhand chop. More pop from the knees, Reinsborough advised, and don’t drop the ax so low behind your head — you might knock yourself out. He and other veterans do the coaching, and they’re sticklers for technique. After meets, they break down video replays with the team, looking for subtle ways to improve.

His freshman year, Reinsborough showed up to school feeling like he needed an out-of-class activity. “I’m not a big sports guy — I wasn’t going to play basketball or soccer. I played drums, but there’s no music program here. So I went down and watched a Woodsmen demo,” he recalled, pausing to take in the whirl of swinging, throwing, cutting. “I thought to myself, huh, this is pretty cool.”

Find schedules and updates at facebook.com/unitywoodsmen.