A Capacity to Astonish 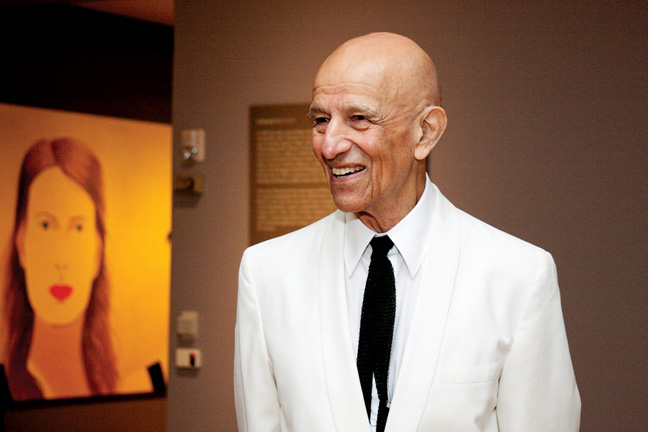 Girls in dresses painted against saturated backgrounds — ochre, yellow, and green — line the walls of Alex Katz’s studio in Lincolnville: his summer’s work, along with a painting of a recumbent moose. The studio looks west, inland, across a mown field to a pond. I recognize some of the models. One is Sharon Corwin, the director of the Colby College Museum of Art, another is the daughter of Suzette McAvoy, the director of the Center for Maine Contemporary Art. On this late summer day, I also recognize that view; Katz often paints that field, the water beyond, and the wooden walkway over grassy shallows. The real place shimmers with the dreamy abstract magic of the art.

Over five decades, Katz has painted that view as well as his family and friends. His portraits — sleek, idealized faces, like vulnerable masks, have become emblems of a kind of contemporary cool — both restrained and intense. The reeds along the shore of his pond, a canoe slicing through those reeds, the sunset through the spruce along the shore: today these images conjure Maine as much as the rocky coast and crashing surf did a century ago. Katz has reimagined the summer landscape for our time.

As a curator and benefactor, he has also helped to reimagine three Maine museums. His longest and most important connection has been with Colby Museum in Waterville, but he is also involved with the Farnsworth Museum of Art in Rockland and the Bowdoin College Museum of Art in Brunswick. He has donated his own works of art to Colby and to the Farnsworth, he has curated and installed shows of contemporary art at Colby and that of Edward Hopper at Bowdoin, and through the Alex Katz Foundation, he has bought pieces for Colby  and the Farnsworth. His curating and collecting are an extension of his art; they illuminate how he sees and how he puts together his own work. They are expressions of what is important to him. “Most artists’ foundations are set up to give grants,” Katz explains. “I thought it was important to buy art.”

Katz is frank about the scope of his ambition and his artistic achievement, but he rarely talks about his philanthropy. “He’s really humble about this work,” Corwin says. “The foundation supports artists by buying their work while they’re still alive. It’s a unique vision.”

The impetus for the foundation came from his own experience. Born in Brooklyn, New York, he grew up in Queens, graduated from the Cooper Union School of Art in 1949, and was awarded a scholarship to study in Maine at the Skowhegan School of Painting and Sculpture during the summers of 1949 and 1950. It took a while for his career to take off, but from the beginning he knew where he was going. “Abstract impressionism had been done. I wanted to do something fresh,” he says. He combined the concerns of abstraction, the action of shape and color on the canvas, with representation of the visible world and what that implies: the action of time. For several years after graduating from art school, he supported himself as a frame carver. Selling a painting was important; it meant both artistic validation and financial stability, which, according to Suzette McAvoy, led him to set up the foundation in the way he has.

Maine is important, too; it is where he discovered his passion for painting the visible world and found his enduring subjects. Bright colors — a green lawn, a shield of yellow hair, a red canoe or red lips, the blue sky of a summer morning or the blue of a lake on a summer afternoon — react to each other and change each other in a deep conversation. Or Katz paints an equally intense absence of color: the nuances of darkness or fog, the bleaching noon sun, a frieze of pale women in black dresses who could be figures on a Greek vase.

His work is both intimate and monumental. The spare shapes and strong lines are unmistakably his. His paintings proclaim themselves with the brashness of posters, but they hold our attention with subtleties: a yellow sunset intensified through the black crows’ wing branches of a spruce, the cold white fireworks of moonlight on water. Katz is not an artist of appearances.

In the last two years Katz has had retrospectives at the Philadelphia Museum of Art, the National Portrait Gallery, and at the Albertina in Vienna. In 2012, the Museum of Fine Arts, Boston, and the Tate Modern’s St Ives outpost are mounting major exhibitions of his work.

Katz bought his little house on a pond in Lincolnville in 1956; he could not afford a place on the coast. Over the years he has hardly changed a thing, except to paint the house inside and out with exuberant and surprising colors: egg-yolk yellow, cool lavender, stormy teal. Inside there is only necessary furniture, a few chairs and tables, and a solid square piano that came with the real estate. He explains how he moved a cabinet from another room into the kitchen, but installed it so it looked as if it had always been there. Through the kitchen door, he points out the shed, painted a bluish shadowy green, which he used as his first studio.

On the afternoon of my visit, he has plans to meet with people from the Farnsworth to discuss a piece that Katz had proposed to buy for the museum. His connection to the Farnsworth began when Suzette McAvoy was curator; personal relationships matter enormously to him. His connection with Colby goes back decades, founded on a friendship with the museum’s former director, Hugh J. Gourley; that friendship continues with Sharon Corwin. When asked what it is about Colby that attracted him, Katz answers, “They’re interested in collecting.” Since 1994, Katz has donated over nine hundred of his own pieces to the museum, which has built a gallery to house the gifts.

“We’ve been working together since I came here, in 2004,” says Sharon Corwin. “One of the first projects I did was an exhibition called “Contemporary Painting” that Alex curated. He chose eight artists, including the young painters Cecily Brown and Laura Owens, and he came in and installed the show.” Curators, Corwin says, “can get caught up in the story they’re trying to tell,” with themes or influences, “but Alex thinks about what’s going to look great. He has taught me a lot about looking. He goes to galleries all the time, seeing what’s next. It’s part of his practice. He comes to me often with artists he’s seen, and I’ll go to New York and see the work. His taste is broad and generous.”

Katz bought several works from that show, the first of many important acquisitions for the museum. For Colby he buys the work of acknowledged masters as well as emerging artists. “He understands the needs of an institution,” says Corwin. “I’d been talking about wanting a work by David Smith, the abstract expressionist sculptor, for a long time. One came up at auction, and Alex helped us raise funds, and we bid for it successfully.” He bought six paintings by Marsden Hartley, who was born in Lewiston in 1877, and he gave the museum a collection of photographs by Rudy Burckhardt, a quirky and brilliant New York artist who summered in Montville.

Katz chooses work for its formal strength, for its capacity to astonish. A Burkhardt photograph delights in circles of glass embedded in a New York sidewalk and the circles printed on a woman’s skirt. In Bavarian Alps, Garmisch-Partenkirchen, Hartley piles looming triangles into mountains and forests. Lois Dodd, in Cow Parsnip, blows up lacy wildflowers into a clump of struts, a brutal, fragile architectural skeleton as short-lived as the butterfly perched on a stem.Cracked Question, a big group of six canvases by Elizabeth Murray, scrawls a graphic challenge. It is punctuation, a question mark, but what is it really about, what else does it show, why is it so moving, so mysterious?

Last summer, Kevin Salatino, the new director of the Bowdoin College Museum of Art, asked Katz if he would install an exhibition of paintings and watercolors that Edward Hopper made in Maine. The centerpiece of the show was a series of virtually unknown oil sketches Hopper painted during the summers of 1916 to 1920 in Ogunquit and on Monhegan at the beginning of his career. Salatino explained that Katz didn’t like the paintings that made Hopper’s reputation: images of isolated people in empty places. “But he ended up loving the Maine work, especially the Monhegan sketches, which he’d never seen before.”

Salatino and Diana Tuite, who co-curated the exhibition, went to Lincolnville to discuss the installation with Katz. “We started to lay out images of the Hoppers, and within a few minutes, Alex got up and mixed the colors for the walls. One is a simple mayonnaise, pretty close to Hellmann’s. He splashed it on a piece of paper, and our designer matched it to a Benjamin Moore color. At first I was terrified, but when I saw it in the gallery, I thought, ‘Wow, this is beautiful.’ ” In these sketches, Hopper was less interested in rendering coherent landscapes than in discovering possibilities of geometry, shapes, and color. Katz found the color that would bring out those wild moments.

Like Sharon Corwin, Kevin Salatino talks about Katz’s instinct, his intuitive eye, his capacity to understand what works. He makes it seem simple. But, as he does in is own art, Katz veils complexity beneath a straightforward surface. The foundation, Corwin says, “has built something for the state of Maine. It is a big part of Alex’s artistic practice and his home.”

This morning in Maine, Katz shows me the Albertina’s sumptuous catalogue of his works on paper, and I ask if he had changed the installation of his exhibition there. “Some things needed more space,” he answers. We look at some of the images — his wife, Ada, the foreshortened canoes, and, he says, almost without a smile, “My subjects are banal.”

Home, family, friends: objects of love. Hardly banal. Over the years in Katz’s paintings the trees have grown taller, children have grown up, friends have grown older with a pale line or two stroked on their faces. Everyone — everything — remains alluring. You want to be there, in his Maine. Katz paints — and collects and arranges — moments. He catches the shortness of time: the real lesson of Maine’s quickly changing light, the elusive lesson of the visible world.