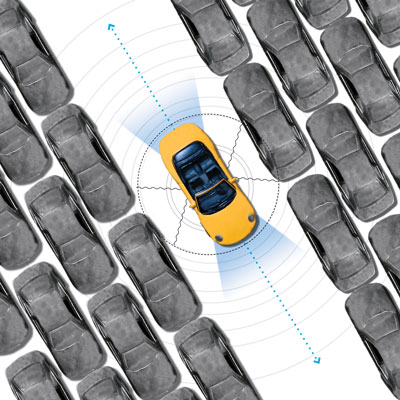 Can Self-Driving Cars Put the Kibosh on Route 1 Traffic Jams?

We sure as heck hope so.

[dropcap letter=”L”]ast summer, Teddy Ort and a few friends planned a drive from Boston to Maine. “I was warned,” he says — he’d heard all about the peak-season bottlenecks and backups along the coast. But bottlenecks and backups just so happen to be his specialty: Ort is a researcher and PhD candidate at MIT, where he works on autonomous-vehicle technology in the Computer Science and Artificial Intelligence Laboratory. In particular, he’s interested in why traffic flows, why it doesn’t, and how self-driving cars will impact it.

So does he think the coming of self-driving cars has the power to, say, deliver us from the southbound slowdown in Brunswick, where the road drops from two lanes to one? Or through downtown Wiscasset, with its railroad tracks and pedestrian bustle? Or smoothly across Camden, with its busy crosswalks and a wicked-confusing right-of-way at its main intersection?

Ort says self-driving cars will help. They take human drivers’ fallibilities — clumsiness, anger, inattentiveness — out of the equation, and they’re programmed to behave well. Sure, they might not make the expeditious Route 1 maneuver of passing a left-turning car by using the shoulder, but neither will they take risks, like peeling out of a Woolwich gas station across traffic, that set off chain reactions of brake lights and bring everything to a standstill.

Plus, Ort says, since autonomous cars will detect traffic conditions far beyond our natural line of sight, and since they’ll communicate and synchronize with each other, they should be able to create steadier flow through interchanges and merge points, like that southbound stretch in Brunswick. You probably won’t fly through at top speed, especially when a lot of cars are on the road, but you won’t grind to a halt in a huge backup either.

Okay, so Mainers aren’t exactly known for their rapid adoption of new technologies (try catching an Uber on the midcoast).

What about places where Route 1 cuts through busy town centers? If you could simply disregard variables like side streets, pedestrians, and stoplights, says Per Gårder, a UMaine civil and environmental engineering professor who studies driver and pedestrian safety, self-driving cars could theoretically triple the amount of traffic that can squeeze through Wiscasset in an hour. Of course, in real life, you can’t disregard those variables. Without human drivers’ foibles, in-town traffic should flow better, but not like on open stretches of road. Self-driving cars won’t change how we think about the balance between being car-friendly and pedestrian-friendly. “Do we want pedestrians in Camden and Wiscasset to be relegated to getting one crossing opportunity, say, every two minutes?” Gårder asks. “I don’t think so.”

Another potential hiccup: In a Pew Research Center Poll conducted last year, 56 percent of Americans said they weren’t interested in riding in self-driving cars. But those numbers don’t phase Ort. He expects that, within the next 50 years, most all cars on the road will be driverless. There are too many upsides and too many hours and dollars already invested by major companies, he says, for it to not happen. As more and more automomous vehicles hit the road, we can expect our daily commutes and summer travels to become increasingly smooth. “At some point, we gave up horses,” Ort notes. “The big question is when, not if.”

Okay, so Mainers aren’t exactly known for their rapid adoption of new technologies (try catching an Uber on the midcoast), but just this summer, the City of Portland announced a partnership with a West Coast software firm to demo a program that maps local road rules for self-driving cars. So who knows? Besides, maybe Maine drivers have even more incentive than our urban counterparts to give up our, um, horses: wouldn’t you rather take in the beautiful coastal scenery than stare at the bumper in front of you, worrying about braking every 10 feet? That’s a great carrot to dangle.