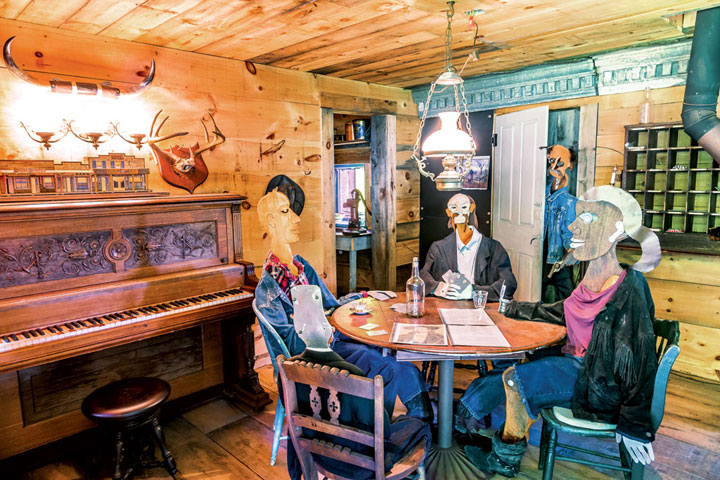 At Nervous Nellie’s on Deer Isle, Peter Beerits has created a world populated by cowboys, dragons, and checkers-playing fish.

Decades ago, when a friend asked Peter Beerits what he wanted to do with his life, Beerits replied: “I want to create a natural history museum of the imagination.” He’s succeeding. He’s turning the Deer Isle property he owns with his wife, Anne, into a fantasyland that draws on history and literature and is rooted in his boyhood infatuation with the Wild West and King Arthur.

Most visitors come to Nervous Nellie’s to purchase the hand-produced jams and jellies and, perhaps, watch them being made. Once here, they discover an admission-free theme park. Buildings, fields, gardens, and woods are filled with interactive scenes and whimsical sculptures Beerits has created from what he calls “good junk from the dump.” Life-sized characters, clothed in period-appropriate attire, populate buildings, some historic and hauled here from other parts of the island, others purpose-built. Populating the grounds are dragons, clowns, a drumming bear, giant flamingo, and lobster and tuna playing checkers. “Ten years ago, I was primarily an artist who exhibited works in galleries,” says Beerits, who has a master of fine arts degree in sculpture. “Now I’m primarily a museum curator. Creating and maintaining exhibits here has become my primary activity.”

Beerits crafts each character from the cast-off flotsam and jetsam of everyday island life: farming implements, household furnishings, clothes, vintage vehicles, and industrial whatnots. An old mailbox becomes a dog; a catalytic converter, a helmet; a gear, an eye; an exhaust shield, a knight’s armor. Take a closer look at the dragon. Its tail and legs are culled from four pianos, the scales are backhoe teeth, the claws are roof-ladder hooks, the neck is a potato harvester, and the head is a radar dish.

The Old West town, with a saloon, hotel, Johnson’s Market “where your grandfather traded,” blacksmith shop, sheriff, jail, lawyer, and fortuneteller, lures visitors away from the boardwalk leading to the cafe and shop. Inside the Silver Dollar, Wild Bill Hickok is playing his last hand of cards, his back to a gunman sneaking through the back door. “Hickok made the mistake one time of sitting with his back to a door, not the wall,” Beerits says, adding that the hand he holds, two aces and two eights, is now known as a dead man’s hand in poker. It’s that kind of detail that adds a touch of reality to the scenes, and it’s the opportunity to grab a seat at the table that engages visitors and keeps the cameras clicking.

In the hotel room above the saloon, a woman fiddles a lullaby to her cradled baby. Most of the décor — animal trophies, antique furnishings, handmade quilts — fits the period. One exception is a poster depicting the Land of Make Believe. “It’s a mystical landscape that recedes into the distance. You can stare at it forever,” Beerits says, acknowledging that it may have inspired his lavishly illustrated Nervous Nellie’s book series and ultimately this growing theme park of his imagination. The stories take place in an “alternative universe that looks like the United States would look one thousand years from now if something catastrophic happened in the middle of the twentieth century to disrupt the course of history,” he says. “In my imagination, the stories are pitched to thirteen-year-old boys, but a lot of people have a thirteen-year-old boy inside them.”

The Old West town fades into the Mississippi Delta, where blues music draws visitors into Red’s Lounge, a southern juke joint. “I didn’t think my Nervous Nellie’s books would ever intersect with what I’m creating here, but then I went to the Delta for a story,” Beerits says. “It was so cool, I wanted to build it. It’s the most successful thing I ever did, gauged by audience response.” It’s easy to see why. A character couple flirts in a corner booth, while a pianist and guitarist crank out the blues.

Beerits moved Deer Isle’s former Hardy’s General Store to the property. Like a living history museum, it provides a glimpse into island life decades ago. No detail is overlooked, from the red hot dogs and buns in the steamer to the pickled eggs on the counter, from Neville Hardy at the register to the women seated out front eyeing the gas pump. In the store, as in every exhibit, fans have left notes, often illustrated, sharing their thoughts and impressions.

Many visitors take in these sights and then settle into the cafe for a snack, not realizing that there’s more to see. In the woods behind them, King Arthur’s knights in shining armor, some larger than life, guard and inhabit the Grail Castle. A feast is in progress, and the Grail maidens are parading through the hall bearing holy objects.

“People come here to purchase jams and jellies. No one expects to have this amazing dreamlike mystical experience,” Beerits says. “For many people who come, visiting is an annual pilgrimage. That’s what keeps my feet to the fire.”

Hilary Nangle is the author of the Moon guidebook series for Maine, including most recently Moon Coastal Maine. She writes the Maine Travel Maven blog.

If You Go: Nervous Nellie’s, 598 Sunshine Rd., Deer Isle, 04627; 800-777-6845; nervous nellies.com. Open daily 9–5 from May through Christmas, and frequently during the rest of the year. Jam is cooked and poured Monday through Thursday mornings, and visitors are welcome to watch. No admission is charged.