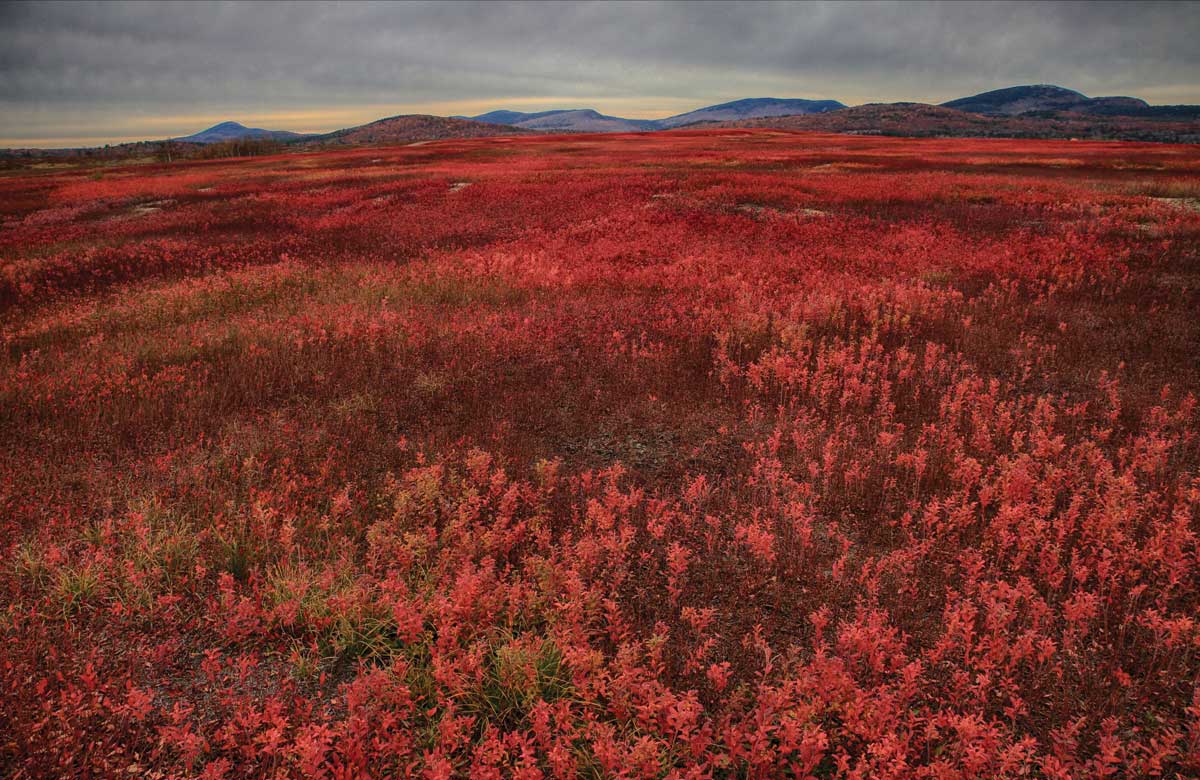 Where to Eat Wild Blueberries in Maine

Wild blueberries may not be the most obvious ingredient one expects to see on a bar menu, but when Luke Davidson launched Maine Craft Distilling, he knew that the locally-grown superfruit had to be part of the lineup. As a kid growing up in the town of Jefferson, he spent many a summer day with buddies, raking wild blueberries from local barrens. They’d gobble them up by the handful, and spend all of August with lips and fingertips stained blue.

“They’re a little tart, a little sweet, and like nothing else you’ve ever tasted,” says Davidson, who still eats them religiously for breakfast with his steel-cut oatmeal. At Maine Craft Distilling, wild blueberries are key ingredients in the Blueshine Blueberry Liquor and Blueshine Lemonade. Davidson is among many Maine restaurateurs incorporating the native berry into their menus in creative ways. Here are a few other spots to indulge in the local delicacy.

It was jars of deep-hued wild blueberry jam that launched Stonewall Kitchen in 1991. Three decades later, the original recipe — just wild blueberries, lemon, and sugar — is still a bestseller, as are a dozen other preserves, syrups, and dressings that incorporate the tiny berries. Stop into the company headquarters and store in York, stock up on jars, and enjoy a peanut butter and wild blueberry jam sandwich at the café. Three stores in York, Portland, and Camden. stonewallkitchen.com

Made with wild blueberry juice, a splash of fresh lemon, and a sprig of mint freshly plucked from the garden, the Wild Blueberry Lemon Mojito is “the perfect way to experience Maine in a cocktail glass,” bar manager Meagan Kaarto says. 95 Ocean Ave., Kennebunkport. 207-967-4050. nonantumresort.com

Each summer, owner-chefs Damian Sansonetti, Ilma Lopez, and executive chef Kirby Scholl whip up new ways to blend wild blues into their riffs on classic Spanish and French dishes — say, in gazpacho, paired with bluefin tuna, or mixed into a sherry cocktail. Lopez, a two-time James Beard Award semifinalist, loves the berry’s complex taste and how it holds up alongside other flavors. “Plus,” she says, “wild blueberries make every dish look beautiful.” 58 Pine St., Portland. 207-772-1110. chavalmaine.com

Two pounds of the indigenous fruit go into each wild blueberry pie at Two Fat Cats Bakery, and the result is delicious. “We just can’t seem to make enough of it,” owner Stacy Begin says. Two locations in Portland and South Portland. twofatcatsbakery.com

Wild blueberries grew on the hillside where Malcolm and Jean Saxton opened Dolphin Marina in 1966, and today, the restaurant’s wild blueberry muffins are as beloved as its views of Casco Bay. Pillowy soft inside and crispy with cinnamon and sugar on the outside, the muffins appear at the table by the basketful, gratis with any entrée, fish chowder, and lobster stew, as if sent down from heaven. 515 Basin Point Rd., Harpswell. 207-833-6000. thedolphin.me

The pancakes have been a calling card for Jordan’s Restaurant in Bar Harbor for decades. “Visitors just want to go to the top of Cadillac Mountain, see the sunrise, then eat wild blueberry pancakes,” manager Kelly Paine says. 80 Cottage St., Bar Harbor. 207-288-3586. jordansbarharbor.com

The lemon wild blueberry cake is a fan favorite at Governor’s. “If we tried to get away with pumped-up blueberries from somewhere else, our guests would hold it against us,” director of operations Jason Clay says. Six locations in Bangor, Ellsworth, Lewiston, Old Town, Presque Isle, and Waterville. governorsrestaurant.com