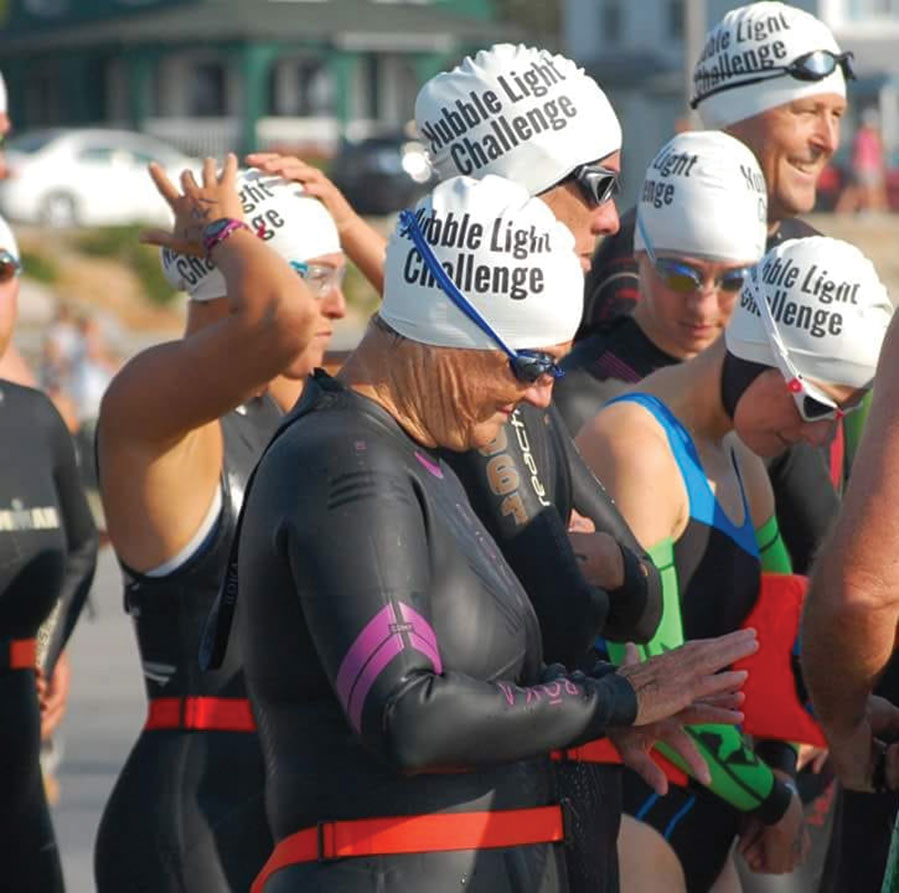 Robyn Shiely at the Nubble Light Challenge in York.

Maine Is Their Playground

These adventurous retirees are breaking through any conventional notions that aging requires slowing down.

There are any number of ways one might be expected to celebrate an eightieth birthday — throw a party, take a trip, go out to dinner. If you’re Lois Hatch, you walk 26.2 miles from Quoddy Head State Park in Lubec to the northern edge of New Brunswick in Canada in the Bay of Fundy International Marathon and get a tattoo of the number 80 on your belly to commemorate the occasion.

“I wanted to do something special, and I couldn’t think of anything I’d rather do than a marathon,” Hatch says.

For Hatch, now 83, the nearly six-hour trek was just one milestone on a life of athletic adventure that didn’t start until she reached the age of 68 — a stage when most folks tend to throttle back. Hatch has finished five marathons. She’s hiked all 48 of New Hampshire’s 4,000-foot peaks. She loves to downhill ski, and enjoys the slopes at Sunday River. (It’s free for the 80-and-over set!) “There’s just nothing like the feeling of gliding down the mountain and seeing this incredible view,” Hatch says. “It’s such a beautiful sensation.”

Hatch has grown accustomed to slack-jawed stares from strangers on her daily training jaunts. But she dismisses any suggestion that she’s an inspiration.

“Getting out there just makes me feel alive,” says Hatch. “It’s my energy. If people only realized how much better they’d feel, they’d be outside doing something too.”

Maine is a popular training ground for retirees who don’t subscribe to the notion that aging requires slowing down. Hatch says she’s motivated by the bounty of natural beauty and the positive peer pressure from so many like-minded friends of all ages.

Those friends include Catherine Kyle, 70, who has been running and racewalking since her 40s, competing in marathons, triathlons, and other races.

“There are an awful lot of like-minded people,” Kyle says. “With the mountains right outside your door, you just kind of end up going farther and farther.”

Kyle prides herself on getting out to run, walk, or hike in nasty weather even when she’s not training for an event. “It absolutely influences everything I do,” she says.

Robyn Shiely, 63, started taking on long-distance open-water swims two years ago, braving wind, walloping currents, and bone-chilling temperatures building on successful finishes of the Peaks to Portland swim in Portland and York’s Nubble Light Challenge, both of which are 2.4 miles. This year, she’s eyeing a 10-mile swim.

“I’m just moving and breathing, and it’s so peaceful out there in the middle of a lake or the ocean, it’s quite meditative,” says Shiely, who retired from the hospitality industry and teaches adult swimming lessons. “Without it, I’d be a basket case.”

Shiely echoes the sentiments of so many senior athletes, who says the rewards of staying active and competitive — the health benefits she’s reaped and the friendships she’s made — far outweigh whatever sweat equity she pours into it.

“Having sports and a high level of activity definitely breaks your belief that there are barriers to what you can do,” she says. “It gives you confidence in situations that you haven’t been in before — physically, mentally, and spiritually. You don’t want to live with regrets. It gives you the courage to keep plugging away at things you want to do.”

A hunger for adventure isn’t the only thing that Hatch, Kyle, and Shiely share. They’re all going to be neighbors at RiverWoods Durham, a continuing care retirement community in New Hampshire, the newest community opened by the RiverWoods Group, the largest family of non-profit CCRCs in Northern New England. RiverWoods Durham offers 150 open-floor-plan apartments, a spacious fitness center, and light-filled art studio, plus a comprehensive health center that provides assisted living, memory care, and skilled nursing.

The community’s proximity to Maine — it’s just 12 miles from the state line — is a huge part of the appeal for many of the residents, as they won’t be far from their training grounds on the Maine coast and the community they’ve established there.

At RiverWoods, Hatch will actually be closer to so many of the parts of the Maine Coast she loves — shows at Portland Stage (she’s had season tickets for 28 years), friends in Cape Elizabeth, and birthday celebrations in Ogunquit — than she was from her home in North Conway, New Hampshire. Selling her house and making the move will free her up to spend more time taking the adventures she loves, as she won’t have to worry about upkeep, maintenance, or shoveling the walk. “I don’t want to wait until I can’t take care of myself,” she says.

Buzz Shiely, 71, who regularly competes in triathlons, was eager to sell the house and move into RiverWoods after seeing his mother move into a similar community and remain active and social much longer than if she’d remained at home. He’s excited to meet so many people who love adventure as much as he does. And Shiely likes the idea of coming into a brand-new facility where all the residents are new, just like he is. “It’s like we’re all a part of the incoming freshman class,” he says.