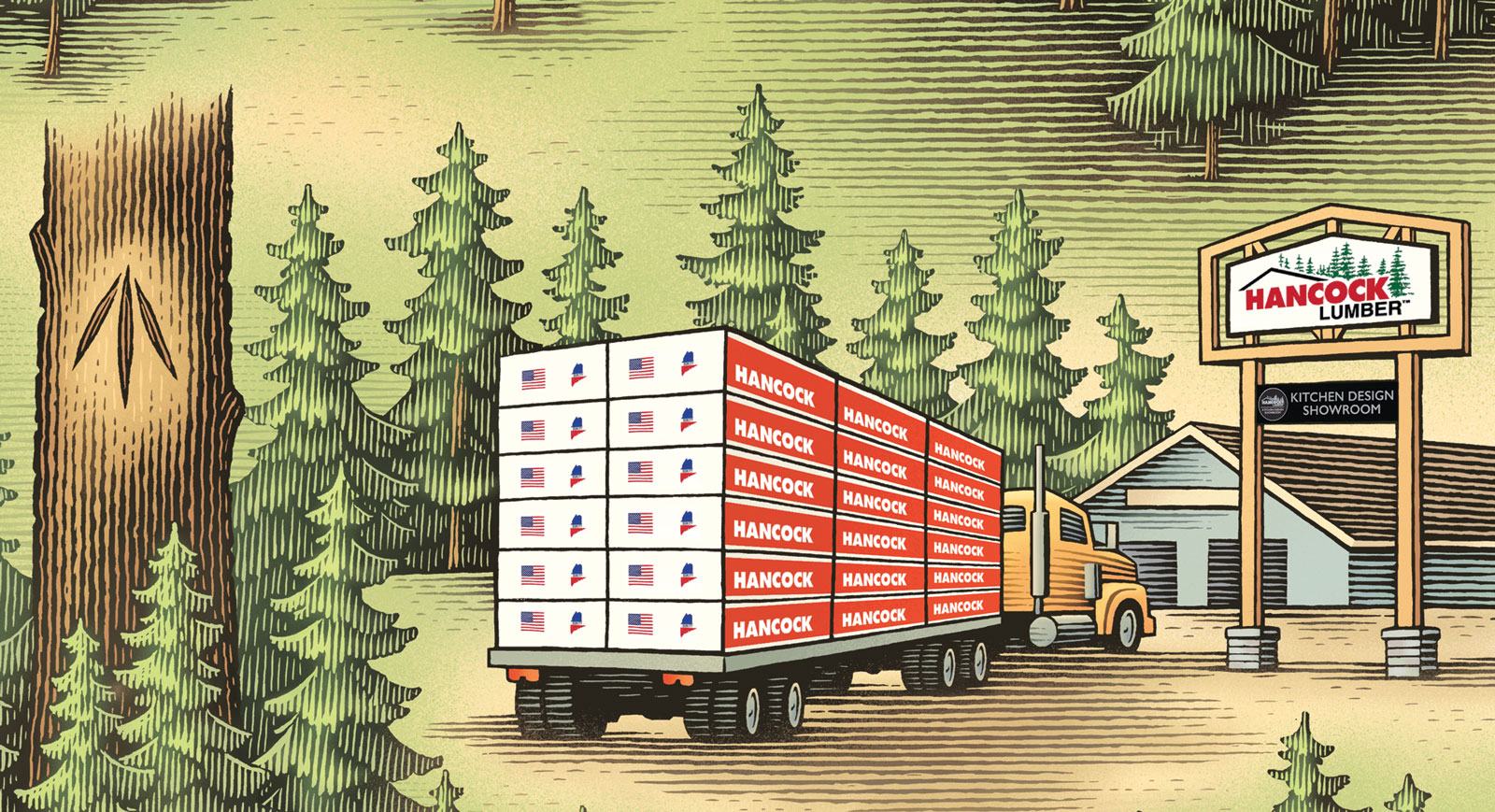 Forget lobster — no Maine natural resource has been as prized as the state’s eastern white pines. The towering trees helped attract European settlers in the 1600s, and by the time Maine became a state, it was buzzing with lumbering activity. Among the sawyer-preneurs were brothers Nathan and Spencer Decker, who bought a sawmill and a woodlot in Casco in 1848 and launched the business that would become Hancock Lumber.

Not too many Maine companies have weathered the Civil War, the Great Depression, two world wars, and several housing market collapses, but Hancock Lumber, now led by the sixth generation, is the country’s largest producer of eastern white pine lumber, employing 550 people and generating $200 million in sales. It’s also one of the few forest-products companies that stewards lumber from the forest floor to the finished building, with woodlands, sawmills, lumberyards, and kitchen design showrooms, plus an export business and manufacturing plants producing trusses and wall panels.

“It’s a rarity,” industry consultant Craig Webb says. “Having all these varied streams of revenue created opportunities during tough times.”

Those times included the 2008 financial crisis, when homebuilding activity ground to a halt. As chief executive Kevin Hancock navigated the crisis, he acquired spasmodic dysphonia, a rare, incurable neurological disorder that affected his ability to consistently access his voice.

The condition forced Hancock to reexamine his leadership role and helped spark a company-culture makeover that gave more decision-making power to workers in the sawmills and lumberyards. The company raised its base pay and rolled out incentives for accuracy and efficiency, which in turn helped shorten the average work week.

In the years since, productivity has spiked, and the company has seen record-setting sales. Hancock Lumber was recognized as a “Best Place to Work” six times by the Society for Human Resource Management, Timber Processing magazine honored Kevin Hancock as Man of the Year in 2014, and ProSales magazine named the company National Dealer of the Year in 2017. The company’s sixth-generation leader attributes such success to all who have been a part of Hancock for 172 years. ”The longevity and diversity of our company,” he says, “is really just a tribute to all the employees across two centuries who have given Hancock its identity, its reputation, and its life.”

Hancock has been stewarding forests since 1848, carefully managing the harvesting and growth process to ensure that trees are growing faster than they’re being cut down. Trees become timber when they’re 80 to 100 feet tall and 2 to 3 feet in diameter, a level of growth that takes nearly 100 years. Foresters stagger their harvests to retain wildlife habitat, maintain the leafy canopy that keeps nearby waterways cool, and make sure trees’ natural regeneration process isn’t disrupted. Hancock doesn’t use pesticides, and loggers remove dead limbs to reduce fire risk so there will be plenty of trees for future generations to harvest.

Eastern white pines have long been admired for their size and for the strength and light weight of their wood, as well as their tendency to grow straight. All these traits make Pinus strobus ideal for flat, stable boards that can be used for siding, wall paneling, sheathing, molding, millwork, ceilings, trim, packaging, and more.

Logs of eastern white pine journey an average of 50 miles from the forest to a Hancock sawmill.

FIT FOR A KING

More than four centuries ago, Maine’s vast troves of this treasured tree convinced the British to develop a “New England” here. When explorers discovered Maine’s pines were perfectly suited for ship masts, King George III had the largest and strongest trunks marked with the King’s Broad Arrow, three hatchet marks indicating they were reserved for the Royal Navy. Colonists rebelled, and the riots that ensued were among the first acts of resistance against the crown, helping to spark the American Revolution.

At Hancock’s three mills, in Casco, Bethel, and Pittsfield, each day some 3,000 logs are debarked, cut, measured, graded, dried in a kiln, and planed. The mills produce nearly 100 million board feet of lumber each year.

Eastern white pines naturally regenerate. Once the trees are 50 years old, they produce pine cones every other year, which open their blades and release seeds that grow into
new trees.

At Hancock’s sawmills, every part of the log is used. Wood shavings become animal bedding. Bark is ground up into landscaping mulch. Wood chips are sold to paper mills. Sawdust is used to help power the sawmills’ clean, energy-efficient biomass boilers.

Maine is the most forested state in the nation, with 95 percent of the state covered in trees.

Eastern white pine is a favorite with home builders, in part because it’s so soft, you don’t have to worry about chipping and cracking as you do with harder woods, says Ryan Crowell, vice president of Crowell Construction, a Harrison-based custom builder. He values the ability to buy local. “They’re not just selling someone else’s lumber,” Crowell says. “They’re stewards of the forest, and they’re rooted in the community. And there’s a peace of mind that comes from knowing the product was grown a few miles away.”

From the sawmills, lumber goes to Hancock’s nine lumberyards in Maine and New Hampshire, as well as to
national manufacturers,
distributors, and retailers. Some 20 percent of Hancock Lumber boards are exported all over the globe, reaching markets as far as Pakistan.

Hancock opens 12,000 acres of its timberland to the public, including 5,000-acre Jugtown Forest, where it maintains trails for hiking, biking, and
other activities.