It's a time of transitions, vivid contrasts, and quiet beauty. 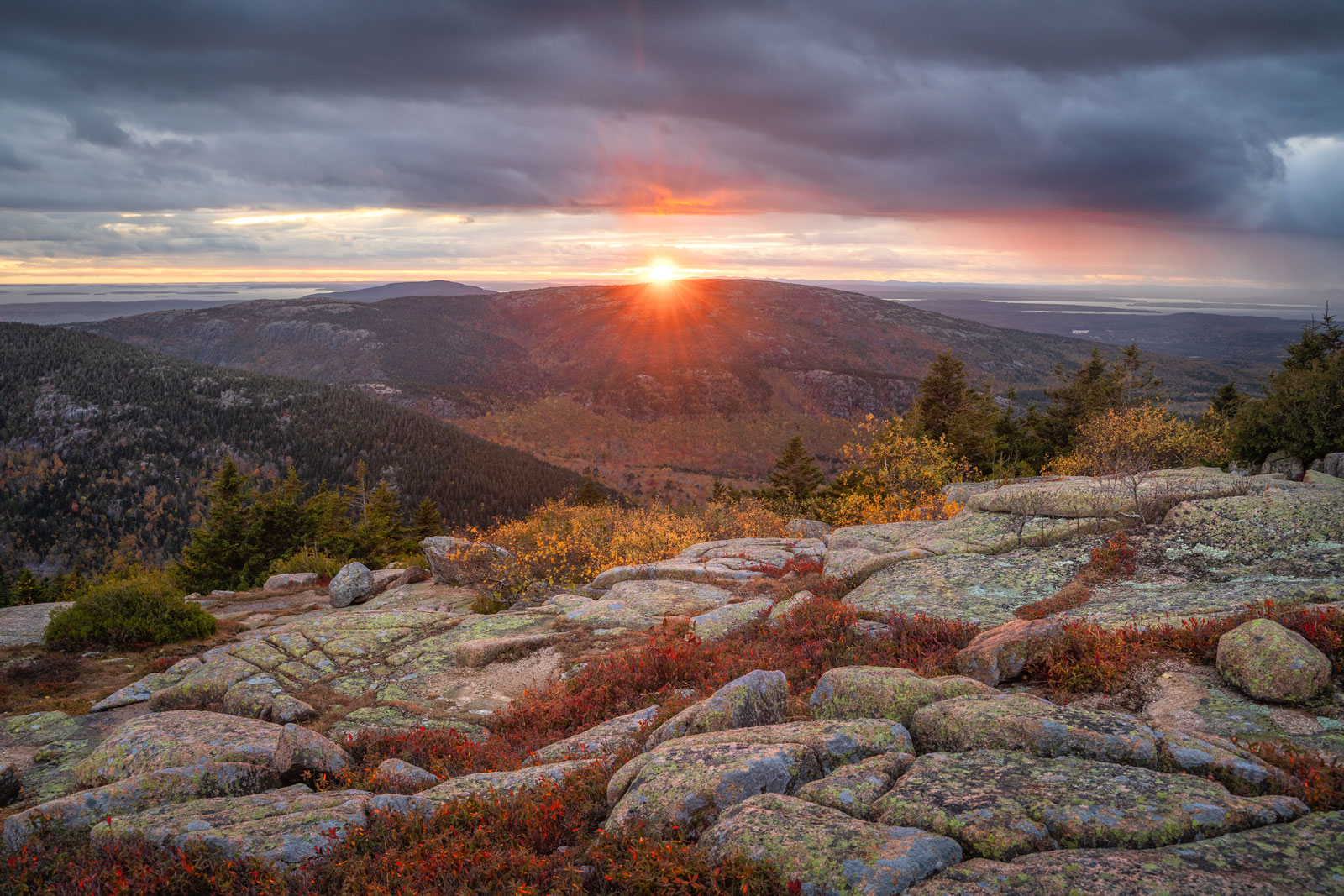 Sunset from Cadillac Mountain, the park’s high point, looking out over Sargent Mountain

The light on Frenchman Bay sharpens from shimmer to glint. Groves of aspen and birch glow gold against green-black forests of conifers that cloak mountain slopes. Huckleberry bushes blaze crimson on granite summits. Northwest winds crisp the air and whisk many thousands of southbound birds over Mount Desert Island. Acadia has come into its most stunning season.

Autumn on MDI, as the essayist Christopher Camuto has written, is “an affair of changing light and shorter days.” And though the days are contracting, the season is prolonged. By mid-October, the hardwood forests of northern and inland Maine are beginning to fade, but Acadia’s autumn color is still going strong. The temperate effect of the ocean often staves off frost into late October, which, combined with the island’s range of elevations, makes for a long and lovely foliage season that can extend into early November. “The color change may start with our summit vegetation and end with red oak and beech in the warmer valleys,” Jesse Wheeler, the park’s vegetation program manager, says.

Acadia’s fall palette derives from its diversity of plant life. More than 30 species of trees grow on MDI, which sits in the transition zone between the boreal forest of spruce and fir and the northern hardwood forest of white and yellow birch, red and sugar maples, white ash, and beech. Varying elevations create a patchwork of plant communities, from bogs to cool-moist forests to subalpine vegetation on some of the summits. All told, more than 1,100 plant species are found on MDI, including 25 species listed as rare in Maine.

Hadlock Brook, near the Hemlock Bridge, one of 17 stone bridges along the park’s carriage roads; looking down on Long Pond from atop Beech Mountain.

Visitors seeking unadulterated fall color will find plenty on the island’s eastern side, where the Great Fire of 1947 burned more than 17,000 acres, taking with it 170 homes, 67 summer estates, and the conifer forests that once covered the landscape. On the scorched ground, wind-borne seeds of hardwoods eventually sprouted and grew, and today, “pioneer species” such as birch, aspen, and striped maple have recolonized much of this land, flourishing in autumn forests of yellow and gold.

What makes MDI’s fall color truly unique, however, begins in the island’s thin, acidic soils. This is where members of the heath family thrive, including blueberry, huckleberry, and cranberry that, in autumn, turn the island’s bogs, open ledges, and summits an otherworldly red.

Along Ocean Drive; Somesville’s iconic arched wooden footbridge; hikers admire the twin hills of the Bubbles near the north end of Jordan Pond; surf crashing at sunrise, from an overlook on Newport Cove.

Above Acadia’s turning leaves, another spectacle transpires in the sky. On clear fall days with a northwest breeze, hundreds of hawks and other birds of prey soar over MDI on their southward migration. These raptors spiral high into the sky on currents of warm air called thermals, which rise midday over the island’s sunbaked ledges and parking lots. Riding the thermals allows them to glide for miles, conserving energy for migrations to wintering grounds as far away as Central and South America.

The best perch for watching southbound raptors is just below Cadillac’s summit along the North Ridge Trail, site of the annual Cadillac Mountain Hawk Watch, from mid-August through late October. Over the past 25 years, hawk-watch teams of scientists, park rangers, and volunteers have recorded more than a dozen species swooping by this spot, including sharp-shinned and broad-winged hawks, kestrels, merlins, peregrine falcons, ospreys, bald eagles, and turkey vultures. Their daily counts contribute to a national database of 400 hawk-watch sites around the U.S., used by scientists to study changes in migration and populations. Last year’s Hawk Watch documented 2,838 raptors over Acadia between mid-August and late October.

While raptors migrate during day, songbirds fly by night, riding northwest winds and navigating, in part, by the stars. In autumn, the Gulf of Maine becomes a “songbird superhighway,” where millions of songbirds from breeding grounds in Canada’s boreal forest follow the coast and “island hop” their way south, en route to the Caribbean and Central and South America. With diverse habitats and large tracts of undeveloped land, MDI and the Schoodic Peninsula provide vital stopover habitat for migrating warblers, thrushes, grosbeaks, and other songbirds. Around dawn, they shower down from the sky to rest and refuel on insects, caterpillars, fruit, and seeds. Fall mornings can find Acadia alive with mixed flocks of yellow-rumped warblers, northern parulas, American redstarts, and many other species, particularly along trails and wetlands with alder thickets, young hardwoods, and edges with a mix of hardwoods and conifers.

The Jesup Path follows a boardwalk through marshy woods (for good reason, vegetation program manager Jesse Wheeler says, it’s one of the park’s most popular walks for lowland foliage); looking south across Eagle Lake at Pemetic Mountain and the Bubbles, one of many autumn views framed with crimson shrubs; the stone Hemlock Bridge, along the park’s carriage road system. “Walking or biking on the carriage roads in a cozy fall sweater once the birch and beech trees have turned and you have that ‘golden hour’ of late afternoon light?” geographer and park researcher Stephanie Spera says. “You can’t really beat that.”

As autumn deepens in Acadia, the short days stimulate leaf fall. The cold north winds sweep the last of the migrating birds south and take down what foliage remains. Yet even then, in late fall, Acadia offers gifts that the summer crowds miss. Trails through leafless hardwood forests reveal dramatic views obscured in summer. The fog and mist and haze have vanished, revealing even more distant vistas. “In the fall, when the air becomes crystal clear, you can see some things that you just don’t see as well — or at all — in the summer,” trail crew supervisor Christian Barter says. “You can see the signature angular top of Katahdin from the summit of Cadillac. And the stars at night are absolutely brilliant.”