Mom-and-pop mountains have hit plenty of bumps. Will they get a lift from the pandemic this winter?

When a group of locals in the little town of Lee, in Penobscot County, chipped in to install a 2,000-foot T-bar on a hill south of town in the mid-1960s, Mt. Jefferson became one of some 100 alpine ski areas across the state. The turn of the ’60s was the heyday of such small, community-focused hills, Maine ski historian Glenn Parkinson says, many of them family enterprises. But in the years that followed, growing insurance costs and liability considerations led to closures, and improved roads made it easier for skiers to day-trip to burgeoning mega resorts like Sunday River. As the decades rolled on, the number of non-destination ski areas dwindled.

Last year, after Mt. Jefferson shuttered, its owner citing “unforeseen circumstances and lack of snow,” the nonprofit trade association Ski Maine was left with 19 alpine members. Facing existential crises that include rising infrastructure costs, warming winters, and declining participation in skiing nationwide, keeping the lifts (or T-bars) running at mom-and-pop mountains can seem like an uphill battle in the best of seasons. Factor in the pandemic, and the prognosis might seem grim for Maine’s local ski areas. But with Yankee ingenuity and a bit of luck, the state’s remaining town hills are out to prove there’s still room for Maine’s homespun ski traditions to thrive.

“It’s pretty challenging getting a volunteer crew out to make snow in the dead of night. It’s dark, it’s cold and noisy, and it’s physically demanding, especially when you have to wake up and get to your real job.”

Among the state’s oldest ski areas is Powderhouse Hill, in South Berwick, where a lift ticket costs $5, cash only, and the lone rope-tow runs on a 1955 engine mounted to a 1938 Ford truck. Like several other small Maine hills, Powderhouse is staffed entirely by volunteers and operates on a combination of municipal funding and lift-ticket revenue (the hill falls under the purview of the South Berwick Department of Recreation). Dan Boyle, president of the ski club that oversees operations, says the hill’s no-frills identity makes it resilient during times like these: whereas biggie resorts like Sunday River rely on lodging, food, and alcohol sales for a significant portion of revenue, Powderhouse has always just been about making skiing accessible for families.

“We pride ourselves on being old school,” says Boyle, who notes an uptick in ticket sales, particularly to visitors from Massachusetts and New Hampshire seeking safe, easy outdoor family fun. “We’ve always been a place where people pack a lunch and change in the parking lot or bring chairs to sit around our firepit. This is how your parents skied.”

Boyle isn’t alone in wondering whether some New England skiers are looking with new interest to smaller mountains, hoping to avoid crowds or hesitant to buy season tickets at larger resorts for fear of shutdowns.

“Nationwide, we’re seeing a lot of demand for outdoor activities,” says Ski Maine executive director Dirk Gouwens, who thinks smaller hills like Powderhouse are well poised to adapt to the challenges of a pandemic year. As early as August, Gouwens and his staff were working with the National Ski Areas Association to draft guidance for hills to open safely, measures like mandating lodges be closed or restricted or that food be sold prepackaged and to-go.

The real test, Anderson says, isn’t COVID — it’s an uncertain climate future. In 2019, a study published by the Journal of Sustainable Tourism found that the viability of New England ski hills will increasingly depend on snowmaking. In some places, the study said, snowmaking needs may more than double in the next 50 years, as climate change brings warmer, drier winters. Boyle worries what it means for hills like Powderhouse.

“We’ve dabbled in snowmaking before,” he says, “but it’s pretty challenging getting a volunteer crew out to make snow in the dead of night. It’s dark, it’s cold and noisy, and it’s physically demanding, especially when you have to wake up and get to your real job.”

And then there’s the cost, Boyle says. At town-owned Camden Snow Bowl — which, in the early 2010s, doubled its snowmaking capacity as part of an $8.5 million improvement project — electricity to power snowmaking cost $117,198 last season. Making twice as much snow, general manager Beth Ward says, would double that figure — a cost the hill would have to pass on to skiers by way of ticket prices.

“A lot of ski areas are trying to think outside the box and look for revenue during other seasons,” Ward says. “We’d love to find ways to minimize the cost of lift tickets any way we can, to keep guests on the slopes.”

In Moscow, 19-year-old Drew Foran is vice president of the Baker Mountain Ski Tow Club. The ski area opened in 1937 and has run continuously, save for two years when it closed during World War II. Foran says he knows the future holds challenges for a tiny hill with seven runs and one T-bar. It’s one reason why he’s majoring in business at Kennebec Valley Community College.

They may lack the glamour (and vertical) of the big three — Sugarloaf, Sunday River, and newly revived Saddleback — but Maine’s town hills and mom-and-pop resorts go big on terrain, bargains, views, and local color. 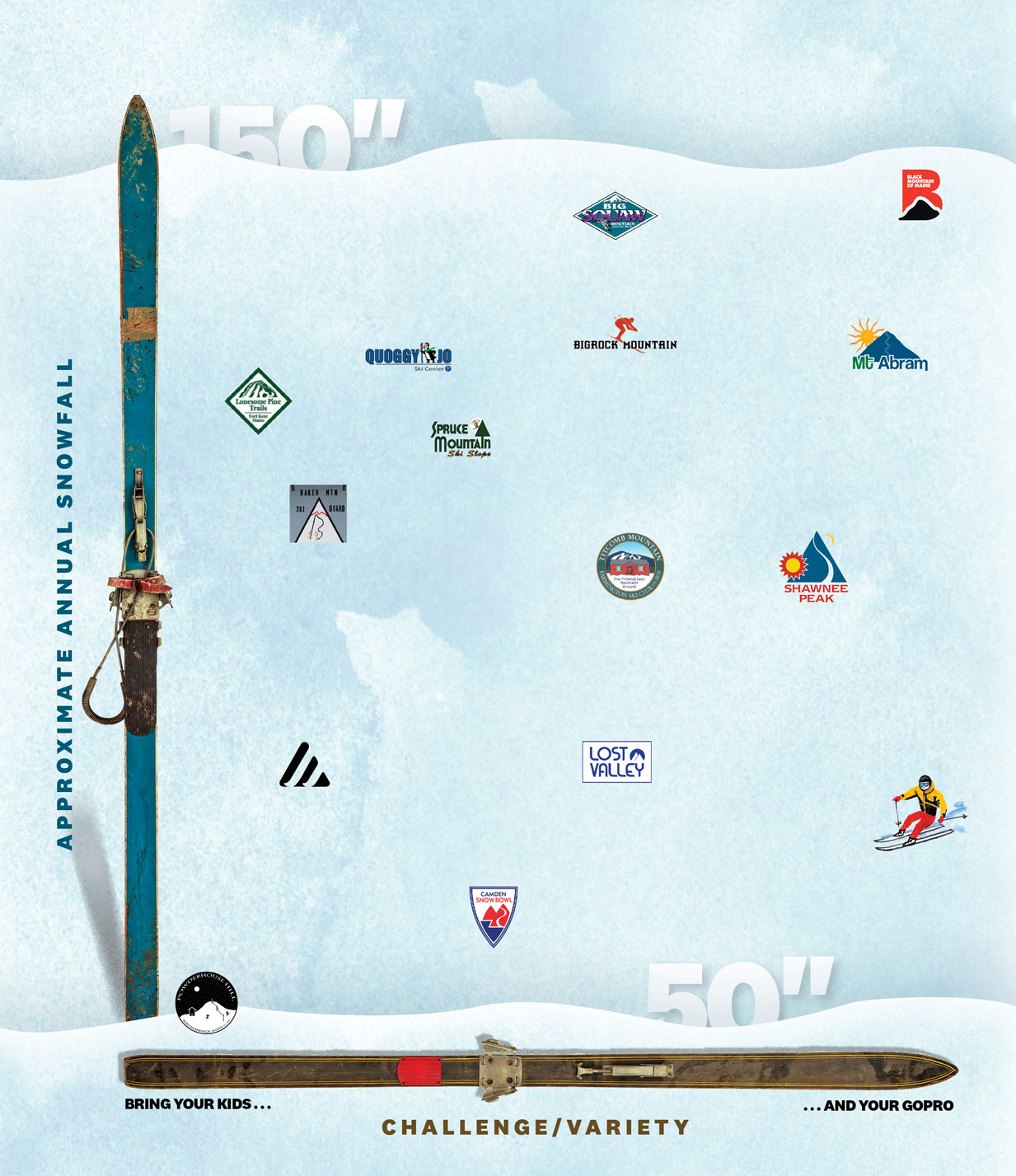 Estimating snowfall is an inexact science, and resorts are prone to exaggeration. We’ve placed logos on an axis based on averaged data from the National Weather Service and ski websites Snow-Forecast.com, OnTheSnow, and Ski Bum. Visit the Ski Maine Association to read profiles of each of Maine’s alpine ski areas.