Portland's Senior Citizens Barber Shop is sharp as ever. 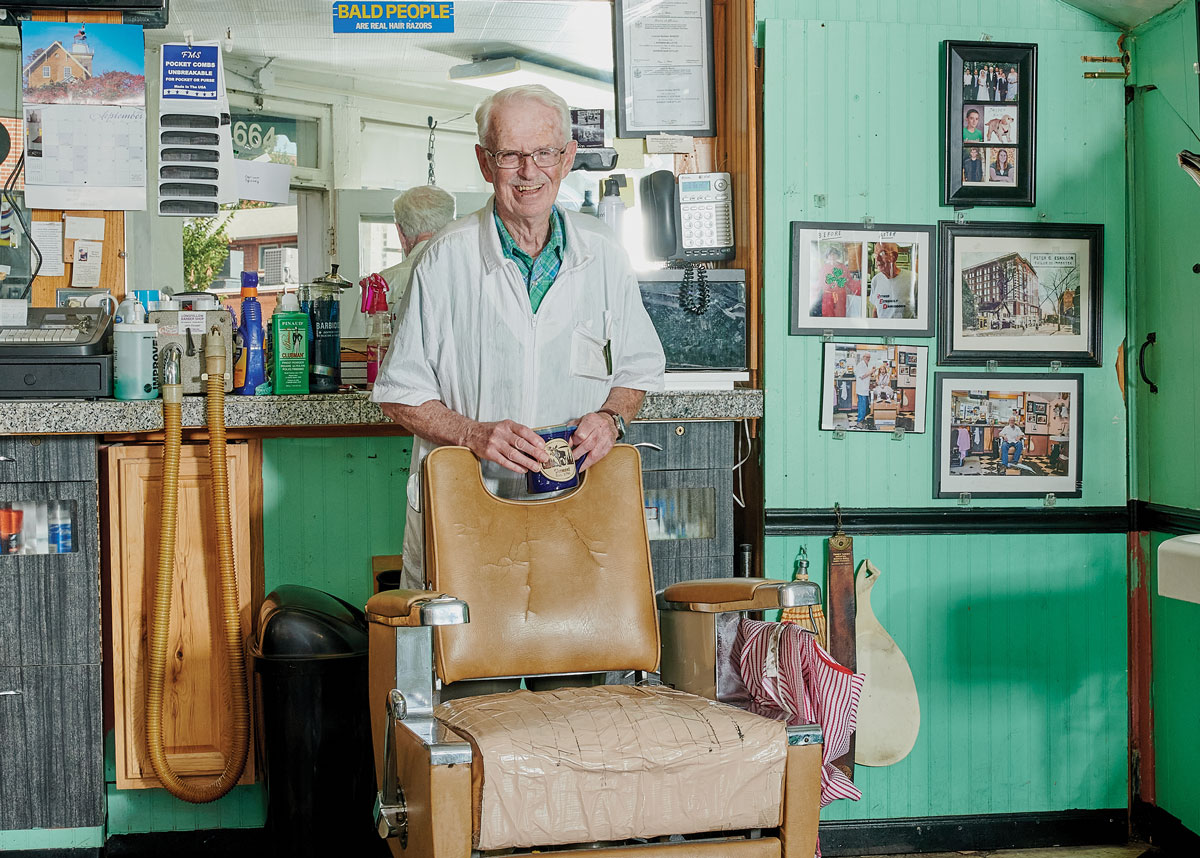 With his silver hair neatly parted, Norman Millette arrives at Portland’s Senior Citizens Barber Shop around 7 a.m., after driving in from his Old Orchard Beach home. Inside, he flips on the power. A fan whirs into action, and the barber pole in the front window starts spinning red, white, then blue. Millette has kept up the same routine since he opened the Congress Street shop 60 years ago, zipping on a white smock, retrieving combs from their bath of electric-blue Barbicide, turning the TV to the Weather Channel.

By midday, hair of every shade is scattered on the black-and-white checkered floor. Most customers are regulars — male and on the older side — gap-toothed boys who turned into gray-haired men over the lifetime of the business. Some wait their turn, while others have just stopped by to chat. Fragments of conversation stick out over the background of television noise: “My grandfather thought horseless carriages would never last.” “The guy across the street had polio.” They complain about parking-meter enforcement and recall the time a fellow regular died while waiting for a haircut, propped against the wall and reading a newspaper. “That’s how long it takes to get a haircut in here,” one man quips. Millette has heard the joke before. He turns 83 this month, and he’s as much a fixture in the shop as the chrome barber chair bolted to the floor.

Outside the shop walls, though, there’s little that hasn’t changed. In the ’80s, an uptick in construction — and rents — ushered in a wave of new businesses and a bougier populace, and the trend has only accelerated. Now, Millette’s neighbors include a bubble-tea shop, a hipster-y speakeasy, and a new building with 600-square-foot apartments that go for $1,700 a month. But his mental map of the city is an overlay of past and present. He remembers the homemade-candy shop and massage parlor across the street, where today a high-rise and retail chain stand. Street corners are scenes of past goings-on — here a bank robbery, there a mounted police officer tying up his horse.

True to its name, the Senior Citizens Barber Shop offers seniors a discounted cut, just $10 for anyone over 65. Consequently, the clientele remembers the old days too. Millette says his oldest customer ever was Fred Hale Sr., once the world’s oldest man, who died in 2004, 11 days short of his 114th birthday. Over the years, Millette has cut hair for everybody from the bishop to the homeless, from tourists to the local guy who says he once fought (and lost to) Muhammad Ali.

Millette greets everyone as if they’re already in the flow of conversation. He relays snapshots of his life, like when he snuck an alarm clock into his friend’s carry-on luggage before a trip to Greece, or how his grandfather would sprinkle arsenic on the rose bushes to keep bugs away, or the time he spent cutting hair on corpses at a funeral home — “The families all wanted the same haircut,” he says, “the flat top.”

At 5 p.m., Millette bags up all the neck towels spotted with hair clippings and shaving cream and tosses out a few soda bottles left on the windowsill. He trades his white smock for a flannel shirt, while a lingering chatty customer fast-talks through the end of a story about a local slumlord. After pulling the blinds, Millette takes a quick glance around, then flicks a switch, and the spinning barber pole slows to a stop.