Straddling the Kennebec, the midcoast communities of Phippsburg and Georgetown embody the best of Maine’s sylvan, scenic, seagoing character. 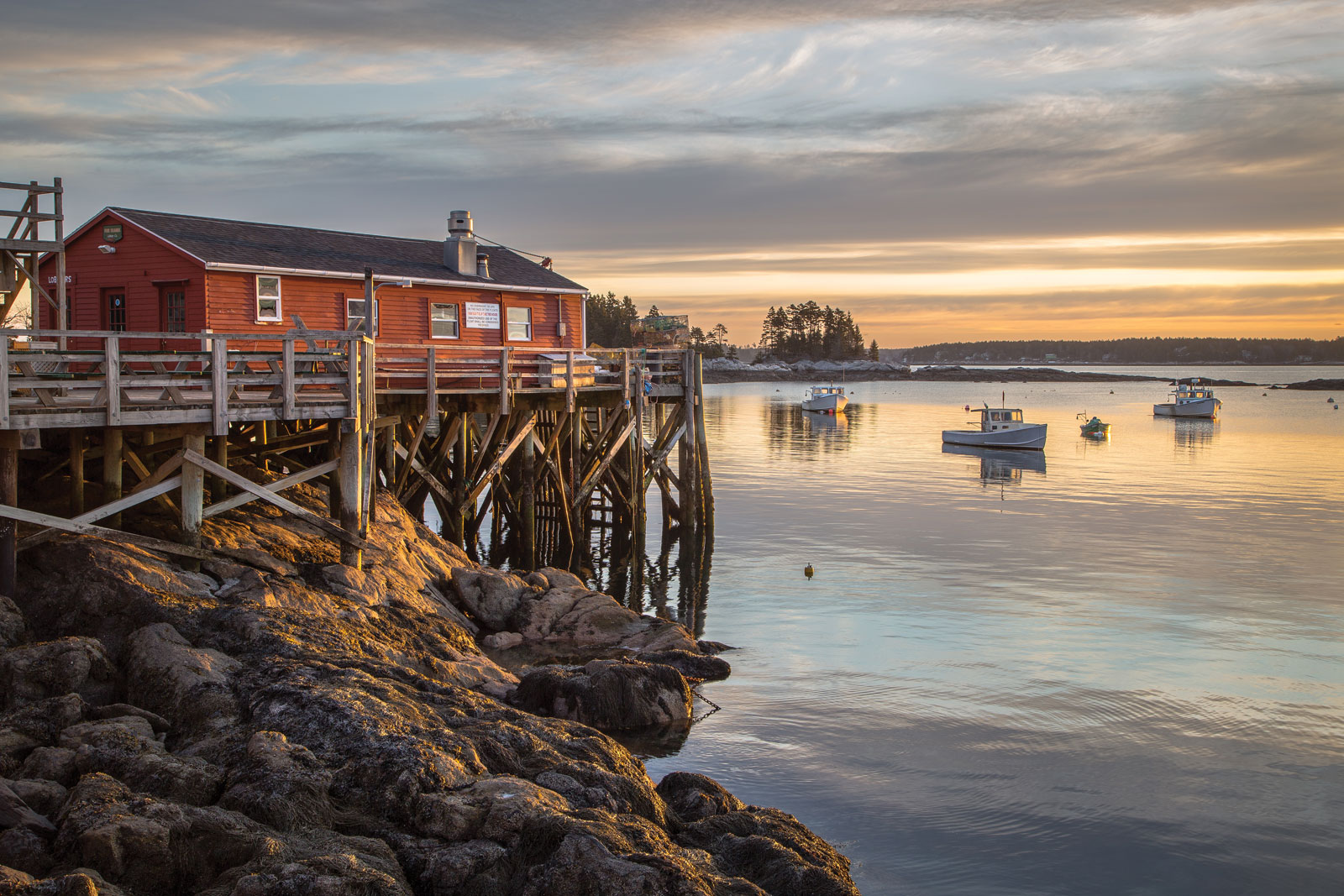 The harbor at Five Islands, one of six villages within the bridged island community of Georgetown.

Dawn cracks a reddened eye in the east, then closes it with a blink of cloud. Gray sky fades into sea, the still water amplifying stray fragments of sunshine. Daylight glows behind the clouds. There is weather coming in to Seguinland.

From the high ledges at Georgetown’s Five Islands, eyes stare eastward over Sheepscot Bay and southward to the Gulf of Maine. Embedded in granite, perpetually open, they have watched from this place for millions of years, stone intrusions with exaggerated lids and lashes. Some are small, with irises of sparkling white quartz. Others are smooth gray ovals more than a foot long. These eyes saw the seas rise as the glaciers left. They witnessed people coming to fish, dig, gather, and hunt, then moving inland as thousands of summers turned towards winter. They keep watch over Wabanaki ancestral lands and waters, where the People of the Dawnland hold aloft the sky.

In case we should fail to see them, someone has daubed a few rock eyes with blue irises and black pupils, surrounding them with lashes like long sunrays. The paint is scuffed by the thousands of feet that pace these rocks to admire the bay broadening into ocean. Nearby, more colors splotch a flat rock, where painters often set easels to render scenes of the wharf and harbor, of the boats, breakers, and islands. A closer look reveals golden lichen growing among the blues, purples, pinks, and grays.

Perhaps this paint was spilled last summer, perhaps a hundred years ago. Between the 1890s and World War II, painters and sculptors brought new eyes to Georgetown and neighboring Phippsburg. Artists like John Marin, Marsden Hartley, and William and Marguerite Zorach, on the vanguard of the Modernist movement, drew creative energy from the rockbound coast and islands, and their presence attracted other artists and writers to what became known as Seguinland.

It’s not a name found on nautical charts, but “Seguinland” was probably used on early-20th-century maps and flyers designed to attract summer visitors. The moniker derives from the feature dominating the skyline from the tips of both Georgetown and Phippsburg: Seguin Island. Two-and-a-half miles offshore, the island takes its name from an Abenaki word describing a “high rounded island,” and its 100-foot crest provided a landmark for seafarers long before a lighthouse was built atop it in 1795. The island guards the roiling mouth of the Kennebec, once known as Sagadahoc, “where river flows into sea” in Abenaki. And Seguin’s looming presence, with its great sweeping eye, is felt across a wide stretch of the midcoast, marking a natural divide between Casco Bay and the region of deep, tendril-like rivers stretching from the Kennebec eastward.

Now, in the gray dawn, Seguin Island Light flashes out to sea and fades as day takes over. As feeble as it looks in daytime, the light shines from a tower 180 feet above the sea and can be seen for 20 miles. The far-reaching beam suits the dramatic scale of this coastline, where the Kennebec’s shores arc into sheltered coves and inlets, then straighten into reaches where the river gallops seaward with the tide or flows strenuously against it. Whirlpools and submerged waterfalls make for challenging navigation. At the river’s mouth, the water rushing through this ravine empties in a melee of tides sparring with winds and the river’s freshwater outflow. To the east and west of the river mouth, edging the Gulf of Maine, long fingers of sand move restlessly with the seasons and decades.

The land on either side of the Kennebec is muscled with granite ledges and bristling with trees, its ragged edges padded by the mud, grass, and reeds of broad tidal marshes. While the islands and peninsulas surrounding the Kennebec have built singular identities as towns and villages, they share more than what distinguishes them: natural features, color, light. Against the dusty dark green of conifers, the seasonal colors stand out in vivid relief: the scarlet of swamp maple and sumac, the azure of freshwater ponds, the brilliant greens and melting browns of salt marshes, magenta and pale-pink beach roses. The coastal light plays over the waves and the lobsterboats, dawn extinguishes the lighthouses, the tides push in and out. The waters catch the years, millennia of human struggles, joys and sorrows, enterprises and failures. Shared geography, shared history.

Clockwise: Rocky headlands at the southeastern edge of Georgetown, near Indian Point, site of a well-heeled summer colony; sunset view of Breakwater Point, on Phippsburg’s Hermit Island; another view of Fort Popham, with beach roses; dinghies at Five Islands.

In a poem called “Sea-Change,” poet Philip Booth wrote of the region’s “sun-splintered water and written granite.” The poem is a tribute to Phippsburg painter John Marin. Booth, rooted in Castine, saw in Marin a kindred spirit similarly drawn to a river-riven coast, to its islands and peninsulas. The landscape’s tide-strong pull resonates in the poem’s closing lines:

. . . out
of that sea-change,
islands rise thick:
like the rip-tide
paint that, flooding,
tugs at your vitals,
and is more Maine
than Maine.

At Five Islands, even as the daylight grows, the sky darkens with storm. Rain comes down in sheets, hiding the islands and drumming over the sound of engines as skippers pull their boats away from moorings towards that first haul. Drivers begin the morning commute up-island, over bridges and choke points sometimes flooded by rainfall and tide. The stone eyes stare through the rain, continuing their silent vigil over time and coast.