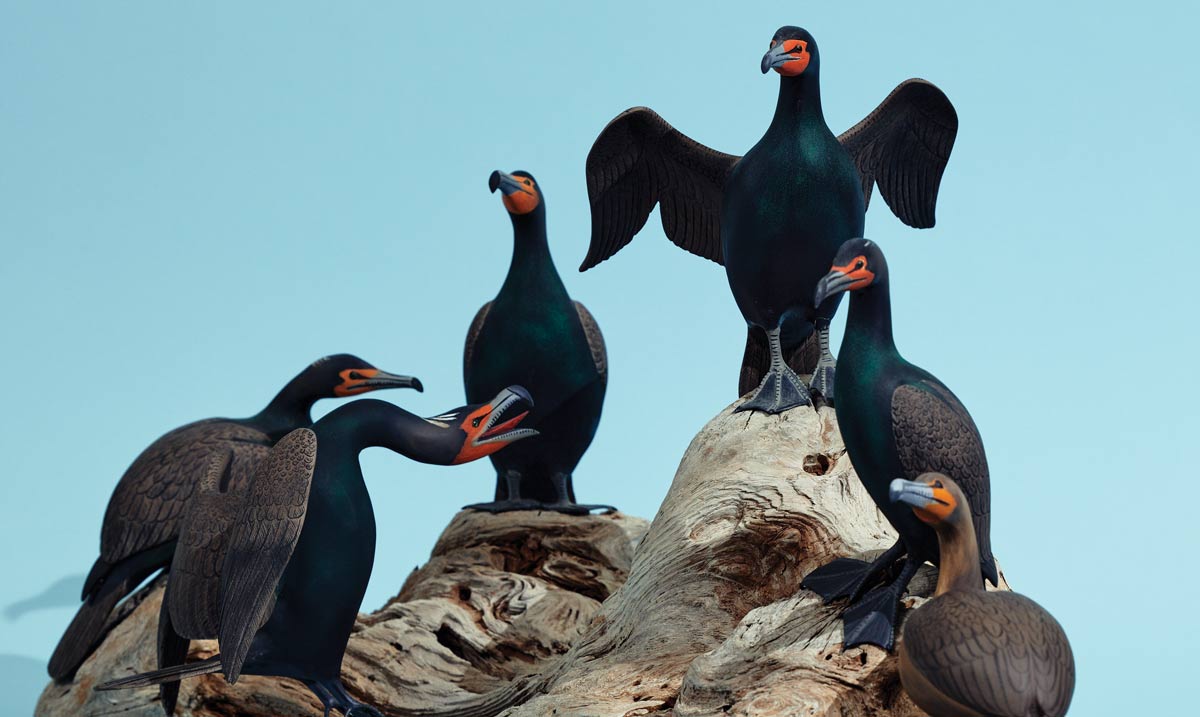 Four decades in, the Wendell Gilley Museum is still carving out opportunities for visitors to tap their creativity and connect with nature.

It all began in “the bird shop,” the garage in Southwest Harbor where plumber turned artist Wendell Gilley carved some 10,000 wooden birds between 1931 and his death in 1983. When friends and strangers dropped by to admire his work, Gilley invited them to carve with him. Today, more than 300 of his pieces are collected at Southwest Harbor’s Wendell Gilley Museum, one of the country’s few institutions devoted to the art of bird carving, celebrating its 40th anniversary this summer. And though it’s a grander space than “the bird shop,” the museum still cultivates the same welcoming spirit as its namesake’s garage.

Visitors to the Gilley, who numbered nearly 10,000 in 2019, step inside the clapboard building to find glass cases filled with painted avian sculptures: an osprey with its wings upraised, metal talons outstretched to snatch a mackerel; a tiny white-throated sparrow, the brushwork feathery around its rust-colored nape; a pair of wood ducks poised on a piece of driftwood, the male brilliant in his breeding plumage. Gilley sold most of his work — he had collectors worldwide — but his wife, Addie, saved the birds that now make up the core of the museum’s collection (which also includes bird-themed work by other artists from Maine and away). In the 1970s, as the stream of garage visitors became a torrent, the Gilleys envisioned a museum, but it took the involvement of friend and philanthropist Steven Clark Rockefeller at the turn of the ’80s to make it a reality.

Beyond the galleries, in a room filled with worktables, racks of carving knives, and sprinkles of wood shavings, artist-in-residence Steven Valleau demonstrates carving and teaches classes. The Gilley is the only museum of its kind with a full-time artist on staff, a role that Valleau has filled for 36 years. “I love to see the surprise on visitors’ faces when they walk into the workroom and see him carving,” museum director Sean Charette says. “It’s one thing to show art, but it’s also important to show the art being made and invite visitors into the creative process.”

A biologist by training, Valleau offers impromptu lessons, formal workshops for kids and adults, and guidance to a weekly carving club. He starts students off with a bird-shaped blank, the raw wood with which a carver begins, and as he demonstrates carving techniques, thin shavings fall away from his flexible fingers. Soon, his audience starts carving too. “I like to have them feel the material,” Valleau says. “Wood is tactile in this digital world.” Some visitors take so quickly to the meditative nature of carving, he says, they head home with a blank and a carving knife from the gift shop.

Director Sean Charette, a native Mainer, came to the Gilley in 2017 after stints at the Getty Museum in Los Angeles and the Museum of Fine Arts, Boston.

For some, carving at the Gilley is an annual family tradition. “Generations of islanders and summer residents still treasure the chickadee or loon that they carved during a visit to the Gilley years ago,” Charette says. Last year, when the pandemic rendered the workroom off limits, Valleau led carving demos beneath an awning on the lawn. This summer, he’ll do the same. Programs that connect people to nature, including occasional plein air painting sessions or birding walks, are central to the museum’s mission. So are its youth programs: The Gilleys insisted the museum be built within walking distance of a school, so students from Southwest Harbor’s Pemetic Elementary regularly stroll over to learn to carve or draw. The museum also provides carving kits and other materials to schools and libraries on Mount Desert Island.

For engagement and communications director Melinda Rice-Schoon, the template for the museum’s contemporary programming was set in Gilley’s humble “bird shop.” “The carvers who congregate at the Gilley today are a direct lineage from the days in Wendell’s garage,” she says. “Big things happen in small places.”

Exhibits and events planned for the Wendell Gilley Museum’s 40th-anniversary season include the annual traveling Birds in Art exhibition, June 15 through August 18, which depicts avian life across a range of media, realist watercolors to conceptual installations. Occasioned by the anniversary, the monthly People-Nature-Art speaker series mixes live presentations and Zoom talks with authors and artists, including Nipmuck flute maker Hawk Henries in July and Down East contributing editor Kimberly Ridley in August.