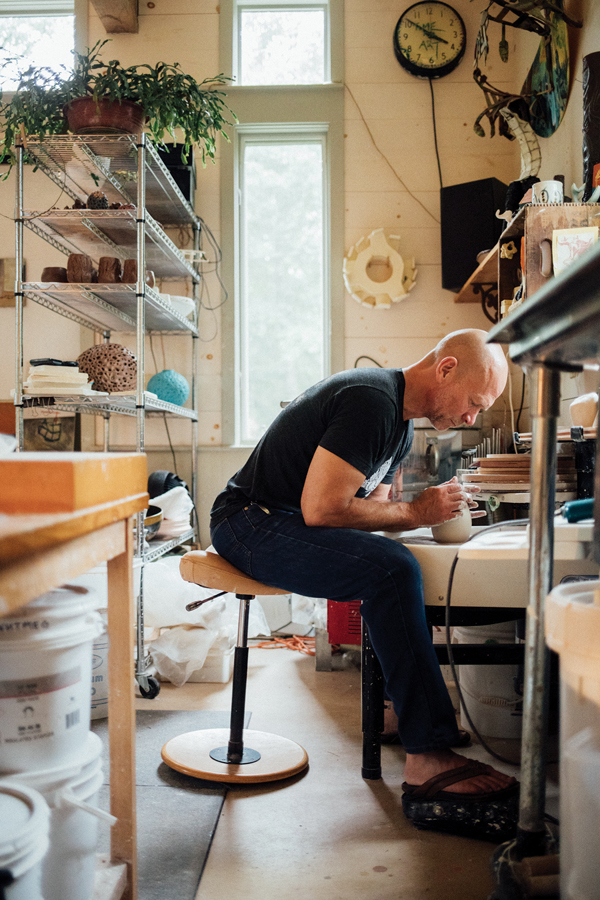 Simon van der Ven first came to Maine to work on a schooner when he was 21, fresh out of college. On one of his first days here, he found a piece of copper patch along the wrack line — the string of seaweed and debris left on shore at high tide. Today, the scrap hangs on the wall of his pottery studio in Lincolnville. Its palette and form, and the mystery of its origin, have informed everything he’s made since he brought it home 37 years ago.

Van der Ven’s work explores the wrack line, which he describes as the place between sea and land, “both and neither.” “More than anything,” he says, “I’m interested in connection, exchange, relationships, the between-ness and togetherness of things.”

His signature perforated egg forms embody his fascination with threshholds and community. These works, he says, “represent how our bodies — our vessels — grow old and move toward spirit, becoming more permeable.” He uses a dental drill to make the perforations before the pieces are fired.

Another piece, a found and polished cherry burl, is filled with small, creamy ceramic eggs that van der Ven has crafted over the course of five years. Recently, he placed the sculpture on the floor of his studio so a 2-year-old visitor could play with it. “The haptic experience — that of-the-hand — is essential to me,” he says.

Van der Ven came to ceramics several years ago, after stints in printmaking, drawing, woodworking, and jewelry making. He took a weekend ceramics workshop at Haystack Mountain School of Crafts and liked it so much that he took a yearlong sabbatical from teaching to work at Les Buffile clay studio in France. As an athlete (he’s an avid cyclist, among other things), van der Ven connected with the physicality clay required of him. “To wedge and throw it, you have to have the strength to be still, which is a very particular kind of strength.”

Surfaces resembling burst bubbles in suds are a signature van der Ven style. He uses a dental drill to make the holes while the pots are green — that is, they haven’t yet been fired. 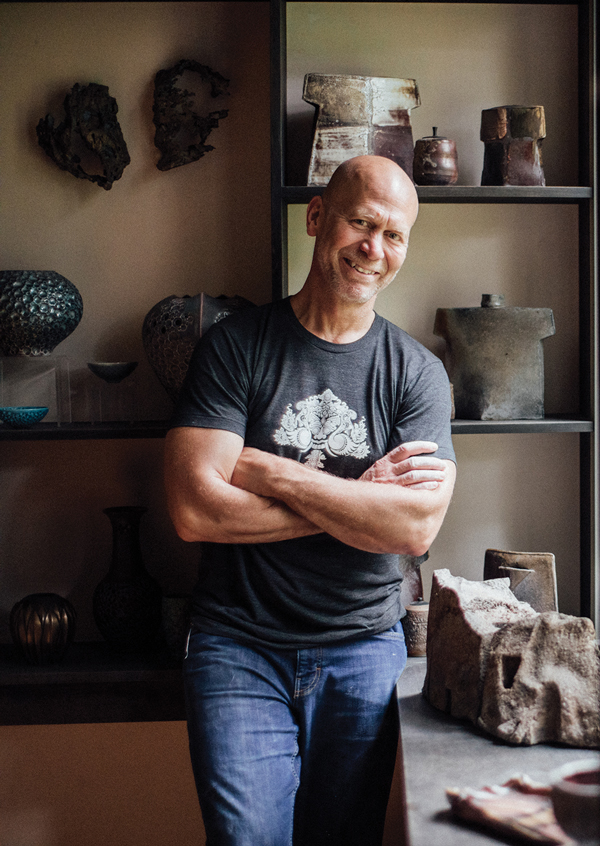 Was teaching as rewarding as creating your own work?

I want everything I do to function as well as my good cups: to be nourishing, warming. My job was to give students the materials and get out of the way. I love that many of my students have gone on to become professional artists — some of my former ceramics students have their own studios just down the road from me now! But in some ways, I’m most pleased by the ones who became businesspeople yet remain deeply connected to the arts.

You’re part of a fairly thriving community of Maine ceramacists.

Clay is a constant reminder that I’m part of something larger. There’s at least 12,000 years of clay history. I fire my work in [Swanville potter] Jody Johnstone’s wood-fired kiln along with many other local artists, all our work placed in there together at once.

Do you draw inspiration from artists working in other mediums?

Joni Mitchell does with her music many of the things I’m interested in: She creates wide-ranging art that comes from lived experience. Her songs are layered, exotic, but also accessible. I have a $9,000 pot at Page Gallery [in Camden] that took me three years to carve by hand. It’s precious ­— and intimidating. I probably won’t make another. I’d much rather make something someone can’t resist touching.

Your work has explored what it means to age. How do you feel about turning 60 soon?

I fear losing intensity, but the shortening of time brings its own necessary intensity. Kate has a saying: “Meaning comes from limitation.”