Who says Mainers have no style? 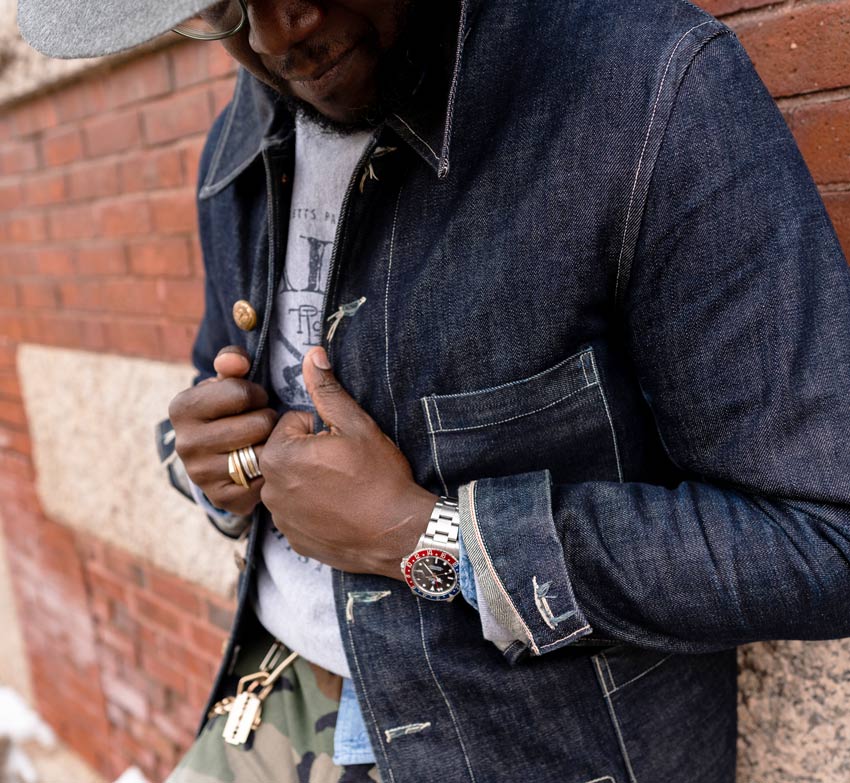 Maine’s never been a fashion weather vane, its sartorial traditions tending towards practicality. Think: Waterville’s C.F. Hathaway shirts, which supplied garments to Union soldiers, sensible leather G.H. Bass & Co., Cole Haan, and Dexter shoes, and, of course, Bean boots, the only items on this list still made here. But in Portland, a small group of makers is building on that legacy of local craftsmanship with elegant, innovative designs (jacket ties that double as cell-phone holders!) appealing to Mainers from a range of backgrounds, while still adhering to the city’s prevailing “brewpub casual” mode of dress.

City Roots: When Bermuda native Carey moved to Portland to attend Maine College of Art in summer 2015, he was happy to see a sizable African immigrant community in vibrant clothing. But when winter arrived, “that cultural identity disappeared because it is not built around this kind of weather.” One of his first projects as a textile and fashion design student: a bright-red-and-green goose-down jacket. Last year, he and partner/fellow MECA grad Poitrast-Upton launched their Loquat clothing and bag line “as a way of connecting people around art for the benefit of marginalized people.”

Spring Look: The couple shows off button-downs and bags in their Helpers fabric, dotted with Carey’s drawings of personal idols, such as the author Zora Neale Hurston and his great-grandmother. The waxed-canvas duffels have linings emblazoned with Bermudian Gombey masqueraders, and Poitrast-Upton’s earrings are made from dehydrated watermelon, a fruit whose historic association with racial stereotypes the pair will explore in a video series this spring. Shirts, $120 each; bags, $22–$240; earrings, $28. loquatshop.com

City Roots: Mainers’ “down-home sensibility and lack of attitude” lured Suger away from New York. “As much as I love fashion, I was never comfortable with the attitude it instills — that because you dress a certain way, you’re better than someone else.” She moved her Angelrox clothing business, which emphasizes comfortable, versatile, handmade pieces in natural fabrics, to Biddeford in 2012. Five years later, she opened a second store in the 19th-century E. Swasey & Co. building on Portland’s Commercial Street. “You can feel the history of commerce and craft here,” says Suger, who decorated her shop with Swasey crocks.

Spring Look: Suger’s clothes are convertible: knot the bamboo River jacket or wear it open and use the pocket ties to hold your phone; tie the Harlow pants at the ankles or leave them loose; don the Loop as a scarf, shawl, or “Jackie O headscarf”; and scrunch the Aria fingerless gloves up or down. Jacket and pants, $128 each; Loop, $38; gloves, $22. angelrox.com

City Roots: Lawal was shuttling between work in Nigeria and family in New Jersey when he landed a corporate job in Portland in 2008. “The size, the quietness, the lack of diversity, I freaked out,” says Lawal, who hightailed it to Jersey every weekend after the move. Then, he says, “I stopped fighting it.” He launched the 2009 Maine African Film Festival, joined boards, started volunteering at a soup kitchen, and, in 2012, opened his clothing-and-home-goods shop, Portland Trading Co. Now? “I’m fully appreciating what Portland has to offer in my journey.”

Spring Look: Growing up around “intensely fashionable people” in Nigeria who frequently had outfits made by a tailor gave Lawal “confidence in my own taste.” His style favors “things that don’t classically belong together,” such as a denim field jacket and Maine sweatshirt he designed, paired with a dress shirt, cargo pants, and his signature fedora. Jacket, $245. portlandtradingco.com

City Roots: There was no Portland apparel-making tradition to tap into when McGowan launched her line of women’s white dress shirts in 1994. “I’m kind of like the grand dame of that.” Inspired by the quality and craftsmanship of the men’s shirts made by Waterville’s former C.F. Hathaway Company, where she worked as a patternmaker, she started as a wholesaler, then opened a Freeport store. In 2019, she downsized to a smaller shop on Exchange Street, lined with racks of crisp white and patterned shirts stitched six blocks away at her Casco Street studio.

Spring Look: This season, McGowan is introducing a rayon-ponte jumpsuit inspired by a 1980s Geoffrey Beene one in her closet. Post-pandemic, “I think people are going to want to burn their sweatpants and pajama bottoms,” but still be comfortable, she says. This jumpsuit pairs “a lot of leg and butt room” with a flattering, shaped bodice, making it suitable for the office or a dinner party (remember those?). Jumpsuit, $230; poncho, $135; mask, $20. jillmcgowan.com