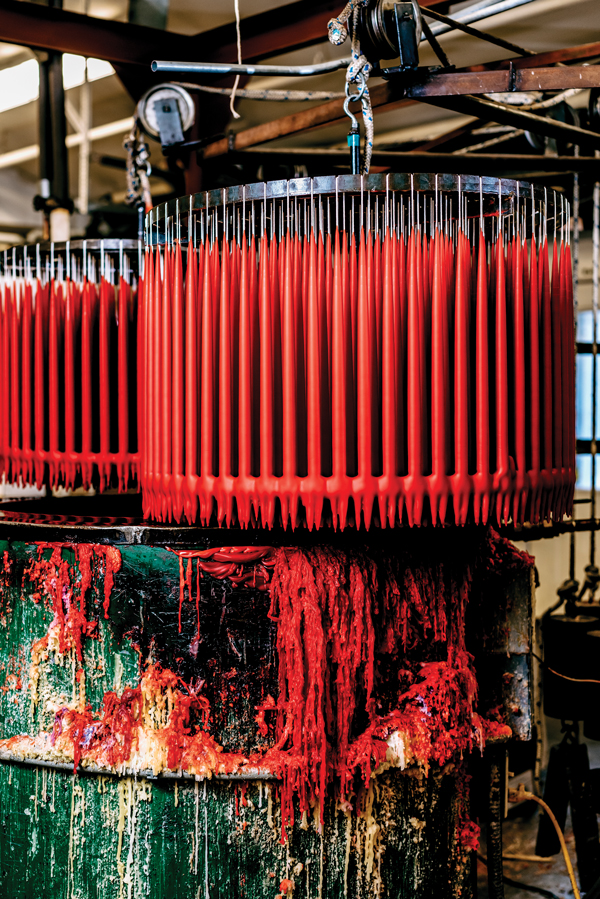 In the late 1970s, Erik Laustsen was a recent college grad working an unsatisfying job in upstate New York. Longing to do something creative, he traveled to the village of Karlebo, Denmark, where he spent a year as an apprentice in his uncle’s candle factory. Today, Laustsen and his wife, Cindy, are still making elegant hand-dipped candles using traditional techniques — hundreds of thousands of them a year. In the small Danica Designs factory in West Rockport, their team must work with precision, from measuring and mixing their own powdered dyes, to dipping weighted cotton wicks into melted wax to just the right depth and just the right number of times to achieve graceful tapered tips. On a recent visit, he told us how it was done.

Adding a wax block to one of the vats; candlemakers Kaitlyn Turnbull (left) and Melissa Tracy-Torres; carousels of tapers in various stages of dipping hover over 126-gallon vats of wax.

As told to Jesse Ellison:

When I got back from my apprenticeship in Denmark, Cindy and I began making candles in a friend’s barn back in New York. I’ve always loved Maine, so in 1982, we bought a big old house in Rockland and set up the factory in the carriage barn. At the time, we had one vat. After about 10 years, we moved to our current location in Rockport, where we have six 126-gallon vats. We started with 24 colors; now we make 43.

I still have wholesale customers from my first trade show in 1980, but now we have about 4,000 accounts all over the country. We make around half a million candles a year. We make pillars and votives too, but the tapered candles are the heart of it.

We’re trying to get a non-drip candle and a burn of nearly an inch an hour in a draft-free environment. The burn is a little less than that because of the initial taper, but we’re close to that inch an hour — a 13-inch candle will typically burn 11 hours. We use very high-melt-point, very highly refined microcrystalline waxes. We do add some white beeswax to it, mostly to get the layers to adhere better. The microcrystalline wax gives it structure and keeps it upright under very warm conditions.

In Denmark, the dipping racks hold 105 pairs of candles, but we added rings so most of ours hold 160. They’re counterweighted with a 55-pound weight that you add to in small increments. You hold the first dip down for about 10 seconds to get the air out of the wick so that it will burn properly.

I don’t think people appreciate how much work goes into it. It takes two days to make the tapers, if everything’s running efficiently. Each candle ends up getting dipped about 50 times, depending on the temperature. You dip to a different depth each time to get the taper shape, and the shorter candles get more dips than the longer ones. The 17-inch will be ready sooner than the 6-inch — it’s just the opposite of what you might think. We use a wrench to check the diameter — it’s very high tech! The funny thing is, my uncle in Denmark, where they’re on the metric system, used a 7/8-inch wrench too.

“I still dip. I’m chairman of the Rockland Planning Board and that’s a lot of stress, so sometimes it’s nice to be dipping. You’re just kind of zeroing in on the candles. It gets your mind off of other things.”

Vote in Our 2022 Best Places to Live Tournament!