The resurgence of Maine’s bald eagle population is one of the state’s most impressive ecological comeback stories. Ron Joseph remembers the big personalities and unorthodox methods that made it work. 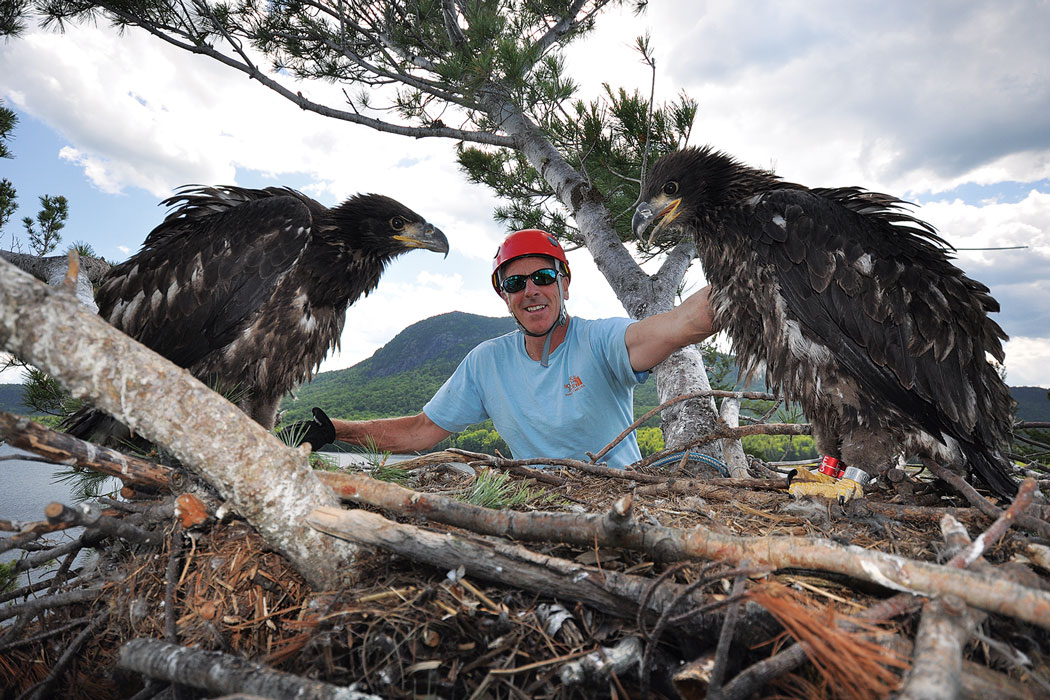 One day in 1978, I stood on the shore of Damariscotta Lake with Frank Gramlich, my supervisor in the Maine office of the U.S. Fish and Wildlife Service. Some 100 feet above us, a hired tree-climber squatted in a massive nest. Peering sheepishly over the edge, he yelled down to us, “This eaglet has three legs — which one do I put the band on?”

Gramlich was a no-nonsense, 80-hour-a-week charger who didn’t suffer fools gladly. He looked at me and rolled his eyes. “Remind me to fire this guy,” he said.

But when the climber placed the eaglet in a canvas bag and lowered it to the ground, Gramlich and I saw that he had indeed counted correctly: the 6-week-old bald eagle had three legs, a genetic defect likely caused by environmental contaminants like the pesticide DDT.

In 1972, the year bald eagles received protection under the federal Endangered Species Act, Maine was down to an estimated 29 nesting pairs and only eight eaglets — a dramatic collapse from the 1,000 or so pairs that had nested here some 150 years before. Elsewhere in New England, bald eagles were already functionally extirpated, and they were struggling in the Maritimes as well, meaning Maine’s population could recruit no “immigrant” eagles from neighboring states.

Today, though, thanks to the work of some creative, dedicated, and largely unsung biologists and land managers, Maine’s bald eagles have rebounded dramatically — so much so that it’s hard to comprehend just how close they came to vanishing from our skies.

One winter day in 1985, Todd called me to ask a favor. Would I pick up seven 55-gallon drums of frozen dead chickens and deliver them to a feeding station?

Frank Gramlich, the grandfather of Maine’s bald eagle recovery program, didn’t fit the mold of the granola-chewing Carter-era environmentalist. A decorated WWII vet with a deeply personal and patriotic appreciation of our national symbol, Gramlich didn’t have a counterculture bone in his body. He was a part-time logger and farmer whose full-time job for Fish and Wildlife often involved exterminating perceived nuisance animals. But as the Maine nature writer Frank Graham once wrote of him, “he [was] alert to the glories of wild things and the needless abuses to which man has subjected them.” Though Gramlich poisoned and crushed the eggs of countless pigeons and gulls during his career, his love of birds was evident from the small barn swallow tattooed on the back of his hand.

Enlisting private landowners, Gramlich preached, was essential to rebuilding the bald eagle population, and he had a knack for winning over even those skeptical of the then-novel endangered species regulations. Research had linked Maine’s dwindling bald eagle population to increased development, depleted fisheries, and environmental contaminants like DDT, PCBs, and mercury. In 1972, the Environmental Protection Agency banned DDT, which causes avian eggshell thinning and reproductive failure; seven years later, it ended the manufacture of the toxic industrial chemicals called PCBs. But both remained persistent environmental contaminants for years to come. Gramlich made it his mission to convince Maine landowners to sign voluntary agreements to limit timber harvesting, road construction, and development on lands where eagles nested. The agreements had no legal authority — they were the equivalent of handshakes between neighbors. And Gramlich spent years sitting in kitchens and living rooms trying to procure them.

In 1978, he hired me to determine ownership of the trees that harbored the state’s known eagle nests — painstaking, sometimes monotonous work that required scrutinizing town tax maps and writing individual letters to landowners. That July, he stood by my desk in our Augusta headquarters as I opened a returned letter from one of them, the banking scion David Rockefeller. I’d written to Rockefeller with news of a pair of bald eagles nesting on Bartlett Island in Blue Hill Bay, which his family owns, asking him to please consider voluntarily protecting the nest. His response was characteristic of many I received in those days.

“Dear Mr. Joseph,” it read. “My family and I would be delighted to protect the eagles. It’s an honor to host our national symbol. Please keep us posted on your work.”

One of Gramlich’s regular collaborators at that time was a 24-year-old University of Maine grad student named Charlie Todd. Todd spent his UMaine years studying eagles’ diets and contaminant levels and conducting aerial surveys from fixed-winged planes to determine eagle nesting sites and wintering grounds. One day, Gramlich suggested he and I drive to Orono so that I might meet this promising young biologist.

“He’s a ponytailed hippie,” Gramlich told me, “but I think he’ll work out just fine.”

Todd and Gramlich were the odd couple of Maine eagle restoration: the longhair at the start of his career and the crew-cut nearing retirement. The former was as shy and unflappable as the latter was gregarious and hot-tempered, and Todd says he remembers having to work to earn his senior colleague’s trust.

By the turn of the ’80s, Todd had endeared himself to Gramlich by discovering that Cobscook Bay was a critical eagle-nesting area, a fact unknown until his survey flights. By then, outreach efforts had convinced most Maine landowners to protect nests on their properties, and both Gramlich and Todd turned their attention to improving juvenile eagle survivorship. Gramlich spearheaded a program to swap healthy eagle eggs from Minnesota for DDT-damaged eggs in Maine nests. Todd, meanwhile, launched a winter feeding program, working with a UMaine doctoral student named Mark McCollough to establish seven feeding stations between Moosehorn National Wildlife Refuge and Bath.

The approach was unusual. A similar program in Sweden had established that feeding eagles in winter could boost juvenile survival rates, but few American agencies considered the approach feasible. To have an impact, Todd, McCollough, and their team had to supply each site with some 1,000 pounds of animal carcasses each week. Keeping the eagles fed required no small effort and plenty of creativity.

One winter day in 1985, Todd called me to ask a favor. Would I pick up seven 55-gallon drums of frozen dead chickens, donated by a Belfast farm, and deliver them to a feeding station way Down East, on Cobscook Bay. My Ford F-150 left a swirl of white feathers in its wake as it chugged along Route 1, weighed down with a half-ton of dead chickens. When I arrived, Todd greeted me in a windswept field strewn with bones and feathers. Feeding stations were set up in open fields, within sight of the open water where eagles searched for food.

Today, Maine supports as many as 800 breeding pairs of bald eagles, more than existed in the entire U.S. when the bald eagle was first declared endangered.

That night, over chicken stew with dumplings, McCollough told me about a farming couple who’d recently delivered an old mare to the feeding station. Their blind, arthritic horse, they figured, would serve a greater purpose as eagle food than it would shipped to a glue factory. McCollough thanked the teary-eyed couple as they hugged their beloved horse one last time. Soon after they departed, his helpers dispatched the animal and started butchering it. But 20 minutes later, the farmers pulled back into the feeding station. Panicked biologists ran to stop them from laying eyes on their freshly butchered horse, fearing they’d had a too-late change of heart. But when she stepped out of the truck, the woman only asked meekly for the harness, so they could have it as a keepsake.

Donated chickens and fish, the occasional horse or sheep, plenty of roadkill deer and moose — all of these fed hundreds of eagles during the five years the team ran the feeding stations. McCollough’s research showed that feeding young eagles in winter boosted their survival rate from 50 to 73 percent. And there was more: supplementing winter diets with contaminant-free carcasses led to less-tainted eggs in spring, since it reduced adult females’ reliance on fat reserves where pesticides they’d ingested were stored. By the mid-’80s, Maine biologists were seeing a stunning turnaround: annual bald eagle population growth of 6 percent.

Today, Charlie Todd heads up the Maine Department of Inland Fisheries and Wildlife’s non-game program and is among the country’s most respected eagle biologists. Since the 1970s, he says, he’s supervised the banding of 847 Maine bald eagles. Reading band numbers with spotting scopes — and collecting bands from dead eagles — has provided critical insight into survival rates, movement, and production of eaglets. An eagle that Todd banded 35 years ago was recently recovered dead in Princeton, in Washington County; it’s rare for any bald eagle in the wild to live much past 20.

Thanks to the biologists and landowners who helped eagles weather their darkest years, bald eagles have repopulated former nesting territories in every region of Maine. They were removed from the federal endangered list in 2007 and Maine’s state list two years later. In 2013, the last time Inland Fisheries and Wildlife undertook a statewide eagle census, biologists counted 633 nesting pairs. Another such survey just launched in March, and Todd suspects the current number is likely closer to 800 pairs — more than existed in the entire U.S. when the bald eagle was first declared endangered.

Gramlich retired in 1982 and spent his golden years farming, tending his fruit trees, and running a makeshift wildlife-rehab facility out of his barn. (His rehabbed great horned owl, Hootie, followed him everywhere on the farm.) Todd and I visited him a few months before he died, in 2006. He was 85 at the time and sent us home with jars of homemade jams and syrup. Gramlich didn’t live to see bald eagles removed from the endangered list, but he’d be proud to know that today, many biologists suspect a more nascent resurgence elsewhere in the Northeast owes to “surplus young” produced by Maine’s robust population.

David Rockefeller died last March, and when I read about it, I thought back on his letter, on the excitement with which Gramlich and I had read it there at my desk in Augusta. Some years ago, I was introduced to the then-aged Rockefeller at a Friends of Acadia event on MDI. “Have we met?” he asked me. “Your name is familiar.” I mentioned the letters we’d exchanged decades before. “Ah, now I remember,” he said with a smile. “Well, I’m seeing a lot more eagles now.”