It’s a jungle out there.

Just ask Liza Watts. She’d always figured she’d move back to her native Maine one day, but living in her Brooklyn apartment with her 7-year-old son, with a good job in tech and a neighborhood she liked, she was in no rush. Then COVID hit, and she wanted to be someplace she felt safe.

So she looked at South Portland, but she was outbid on house after house. She shifted her focus to Harpswell’s Bailey Island, where she’s vacationed since childhood and members of her family have long owned cottages. Travel restrictions kept her from touring properties, so her broker sent detailed video walk-throughs. After five months of looking, she bought a three-bedroom bungalow — with a home office for working remotely — for $350,000, having never stepped foot in it.

Closing was “such a relief,” Watts says. “I knew I wouldn’t have to worry about close quarters, how I was getting to work, or whether it was safe for my son to go outside.”

Watts is part of a wave of home buyers who’ve set their sights on Maine in the last year. Even before COVID, the state’s real estate market had hit historic highs, buoyed by low interest rates, but as the pandemic roiled the nation and remote work became the status quo, sales volumes — and home prices — in Maine have soared to gobsmacking new heights. Houses are being snapped up twice as fast as just a couple of years ago, real estate agents say, some within 24 hours of being listed. Cash offers of $100,000 to $150,000 over asking price aren’t unheard of. The suddenness and intensity of the boom has left agents and homeowners from Portland to Rangeley to Presque Isle beset and bemused over what’s next for the gonzo market — and for their communities.

“It’s a bit wild,” says Dava Davin, founder of Portside Real Estate Group, a Falmouth-based agency with five offices across southern Maine. She mentions a four-bedroom in Westbrook, listed last August for $859,000 — more than three times the city’s 2019 median home price. It drew 16 offers and sold in October for $1 million, an eye-popping new record for the former mill town.

The number of out-of-state buyers rose from 25 percent in 2019 to 33 percent last year. (Many of the remaining two-thirds, Davin says, are Mainers taking advantage of a robust market to downsize or finding homes that better suit COVID realities like remote work and schooling.) How will famously wary Mainers take to the surge of newcomers? How might a state with stagnant population growth and the country’s highest median age benefit from it? How might Maine homeowners capitalize on the boom? And how will the market fare as vaccines bring a return to a version of normalcy?

“There are still way too many uncertainties to understand how it’s going to play out,” says Dr. Charles Colgan, professor emeritus of public policy and planning at the University of Southern Maine. Below, a few glimpses at how it’s playing out now — and at what would-be buyers and sellers might expect from the hottest sector in Vacationland.

Across the last seven years, Maine’s real estate market has trended in one direction. 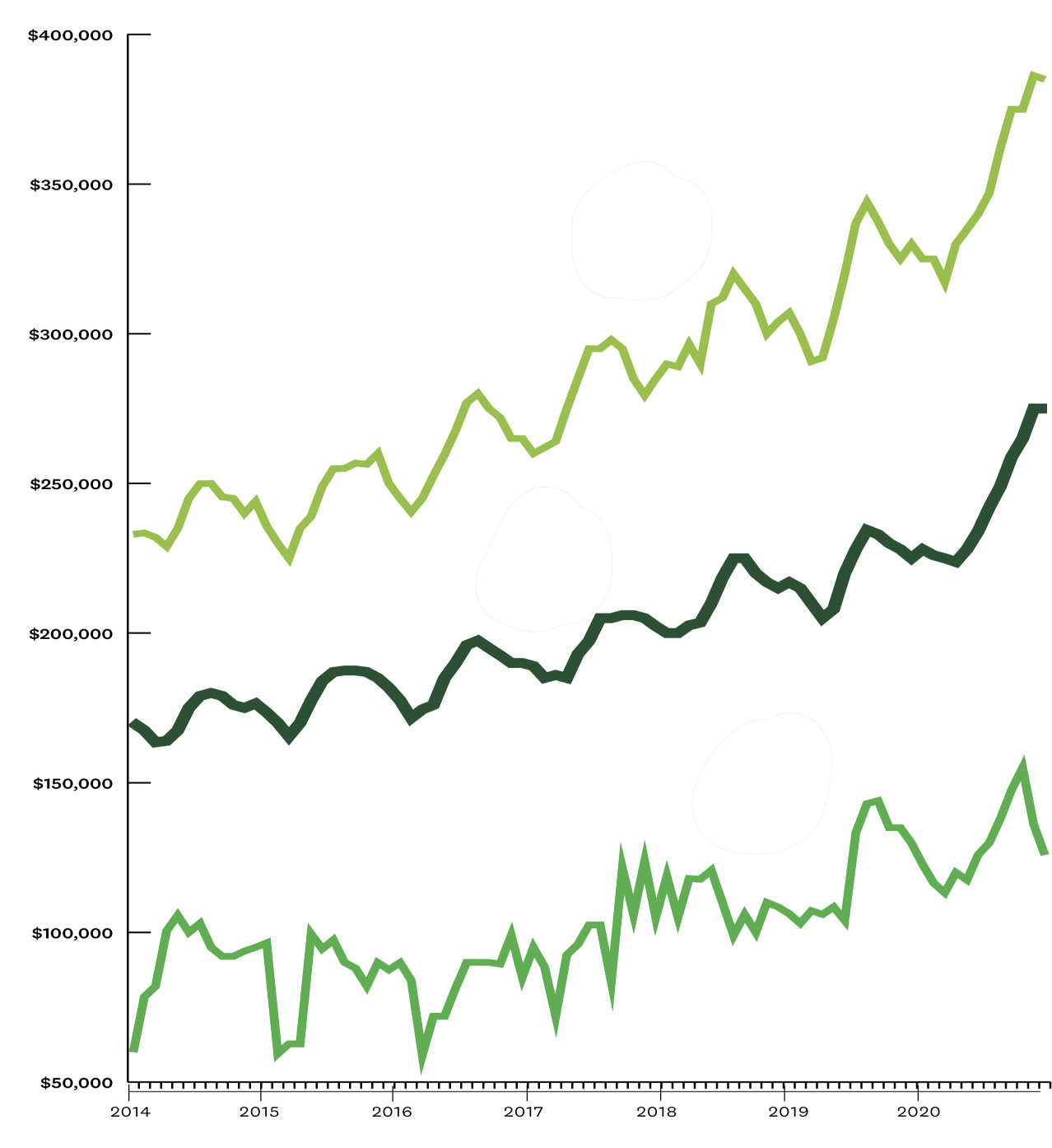 Data: Median sales prices for single-family existing homes for the rolling quarter ending in each month from January 2014 through November 2020, from the Maine Association of Realtors®.

A few price comparisons from across the state (in terms tailor-made for Mainers).

Maine is Still a (Comparative) Bargain

Is it any wonder urban exiles from elsewhere in the Northeast are looking to Maine?

Never mind the quality of life (which is, of course, unbeatable). Even as the state’s home prices soar, Maine remains by far the region’s most affordable state. For a snapshot, compare the median sales prices from last November (the most recent month’s data available when our March issue went to press).

So Why Can’t We Just Build a Lot More Houses?

“Historically low.” That’s how former Maine Association of Realtors president Tom Cole described Maine’s inventory of for-sale homes at the end of his term, in December. In fact, Maine real estate insiders have used the phrase since at least 2016 to describe a market that seems only to tighten with each new year. So we dared ask the dumb question: why aren’t developers just building houses left and right to supply perennially intensifying demand? The short answer: it costs too much to be real profitable. A few reasons why: