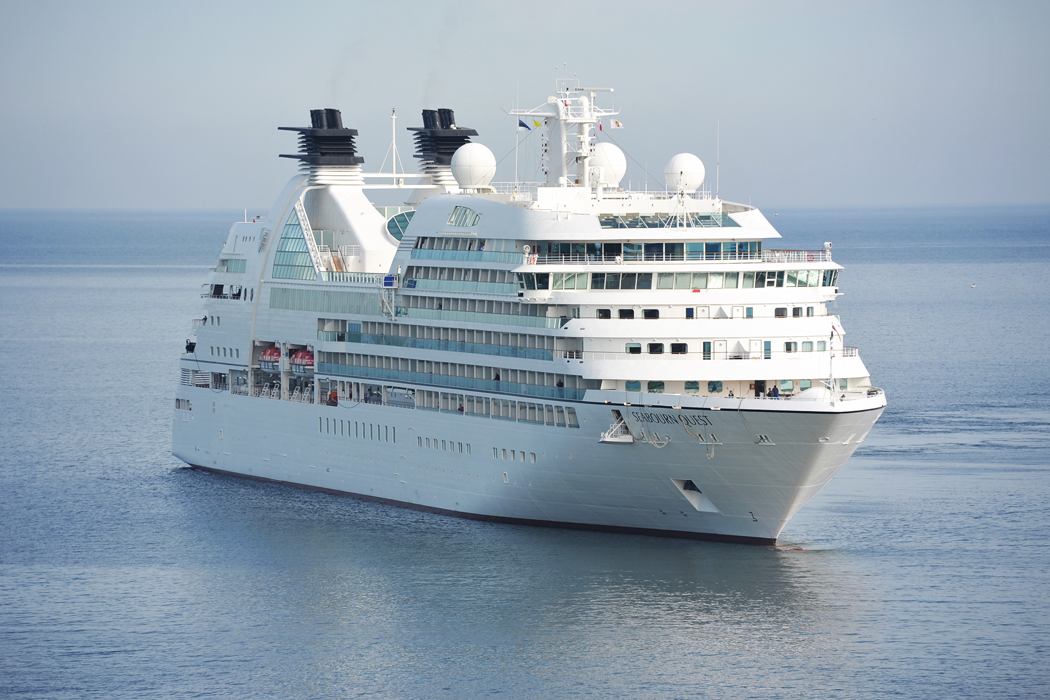 In a state that thrives on tourism, why do cruise ships still leave so much discord in their wake?

[cs_drop_cap letter=”S” color=”#9e0d0d” size=”5em” ]easickness, cramped quarters, the occasional norovirus outbreak — all perfectly legit reasons to be wary of a cruise. And yet! Tens of millions of people do it every year, enticed by low fares, by the convenience of destination hopping without repacking bags, by the shot at worry-free rest and relaxation.

From late April through October, some 150,000 of those people clamber ashore in Bar Harbor, happily injecting $20 million into the local economy, despite the fact that Bar Harbor isn’t a particularly convenient port. Cruise ships have to anchor offshore, and passengers shuttle to the town dock via tenders. It’s a slow and tedious process, and one that town officials hope to eliminate by building a mega cruise terminal on the site of a defunct ferry dock on the edge of downtown. The new terminal would jut a half-mile into Frenchman Bay in order to accommodate the biggest ocean liners, allowing passengers to step directly onto terra firma. As a result, visitors would have more time on shore. Plus, supporters say, a proper terminal might entice still more ships to put Bar Harbor on their itineraries. More ships = more passengers = more visitor hours in town = more money. So the thinking goes.

But when the town put forward a ballot initiative recently to rezone the old ferry dock, acrimony ensued. Opponents accused town officials of cozying up to the cruise industry and papered the streets with flyers; supporters accused the naysayers of conducting an underhanded disinformation campaign.

There are cases to be made against the cruise industry as a whole, certainly, what with its penchant for strewing human waste and toxic bilge across the ocean, its tactic of registering ships in countries like Liberia and the Bahamas to avoid paying taxes and minimum wages, its disregard for local cultures (the industry’s operational ethos is a perversion of the old saw about valuing the journey over the destination).

But the authors of a Change.org petition opposing the Bar Harbor measure instead focused their arguments on visitation stats, specifically lamenting that a new terminal would open up the town to considerably more people (whom, they proposed, it would be better to divert to Lubec). The petition ballparked that as many as 720,000 cruisers might descend on Bar Harbor annually; town officials have estimated 450,000. Either way, those are big numbers, a three- to fivefold increase.

Still, such numbers need context. About 3.3 million people visited Acadia National Park last year, and for the vast majority, Bar Harbor (population 5,300) is the gateway town, regardless of whether they drive, fly, or sail to get there. As is, both town and park can get overwhelmingly crowded in peak season, which understandably frustrates many locals. But at most, 5 percent of Mount Desert Island’s visitors are cruise passengers. It ain’t nothing, but neither is it the root of MDI’s congestion problem. A new terminal may boost cruise traffic’s portion of the overall statistical pie, but trends suggest that more and more visitors will be arriving by other means as well.

Once we hang our “Vacationland” shingle, do we get to police who shows up and how they arrive?

So why do cruise ships catch so much shade? Might it have more to do with the changing nature of today’s tourism industry — and the way cruising can seem like its apotheosis? Few of today’s tourists resemble the well-heeled rusticators of the classic Maine mythos; the 21st-century Smiths of Peoria don’t comport themselves like the 19th-century Astors of New York. So-called rusticators came to MDI to escape the city and embrace a quieter, slower existence. They rambled the hills, picnicked at the ponds, went dancing in town in the evening. And the way these fine and important people embraced the lifestyle paid an implicit compliment to us Mainers — this island of ours was a worthy place to be, a haven where people who knew good things sought refuge.

By contrast, a recent Associated Press poll found the thing Americans most want to do on vacation is nothing at all. They don’t want to get to know a town, hike a mountain, or paddle a lake — they just want to lounge. And for such travelers, a cruise might look pretty good, with port visits basically a pretext for laying about on a boat, having every need catered. With dining, drinking, and entertainment all onboard, why invest much time or energy on shore? The rote and hurried manner in which some cruise ship visitors seem to try to cram in sightseeing, a little shopping, and a quick lunch before scuttling back to the boat, this signals to residents that perhaps Bar Harbor is just another roadside attraction on a trip to nowhere in particular.

Cruisers certainly aren’t alone in that attitude towards travel, but the way they come and go from the docks en masse sure makes them conspicuous, easy targets for anyone grumpy about the commodification of Maine’s landscapes and towns.

Of course, those ships bring plenty of money into a place where tourism is the economic lifeblood. Once we hang our “Vacationland” shingle, do we get to police who shows up and how they arrive? Perhaps needless to say, despite the noisy opposition, Bar Harbor voters broke 60/40 this summer in favor of moving ahead with the new cruise ship terminal.