[dropcap letter=”C”]liff Krolick wooed Lyn Sudlow back to the tiny western Maine town of Parsonsfield with a promise: “The incentive was that he would help me build a super energy-efficient house for us to retire in,” Sudlow says.

This spring, they’ve been putting the finishing touches on the product of that pledge — a super-insulated passive-solar home that they designed and built for $200,000 with the help of architect Chris Briley. “We wanted to get as far away from fossil fuels as possible,” Sudlow says. “We have no electric or heating bills. I didn’t want to have to worry about those bills during my retirement.” 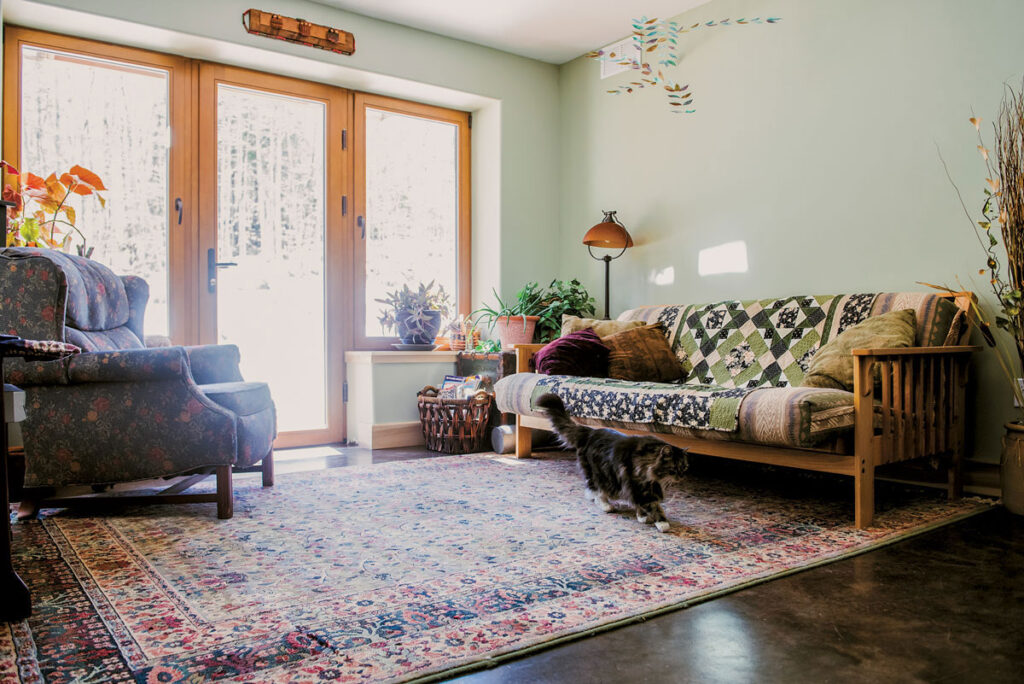 Sudlow and Krolick first met as neighbors in the 1970s when, inspired by the back-to-the-land movement, Sudlow and her then-husband moved to Parsonsfield and built a passive-solar home. After they divorced, Sudlow moved away, but eight years ago, she bumped into Krolick, still living in Parsonsfield, where he runs a mountain bike touring company. The two hit it off.

To keep their project on budget, the 1,200-square-foot house was erected on a frost-protected slab instead of a traditional basement. “What we saved in concrete we spent on extra insulation,” says Briley, a founding partner of the Portland-based architecture firm Briburn. The 14-inch-thick walls are packed with cellulose insulation. “The average house loses 25 percent of its heat through leaks. This house is very, very tight.”

Sudlow and Krolick cut costs by being hands-on during the construction. They milled trees for lumber and interior trim, gathered rocks and built the stonework, installed the repurposed-slate kitchen countertops, and built the insulated-concrete-block base for the attached year-round greenhouse.

We have no electric or heating bills. I didn’t want to have to worry about those bills during my retirement.

The couple also had eyes on future savings. South-facing European triple-pane tilt-turn windows allow maximum light to penetrate and heat the home. Every space, from the main living area on the first floor to the cozy library nook in the loft, is flooded with sunlight. Exterior shades over the first-floor windows double as platforms for solar hot water collectors. Even on last winter’s most bitterly cold days, the inside temperature never dipped below 50 degrees. Sudlow and Krolick used a small woodstove to supplement the passive solar heat, and they never had to use their only mechanical heating system, a mini-split heat pump.

To decrease their dependency on sunshine, Sudlow and Krolick plan to add 10 more solar panels to their existing six, as well as a micro-hydro system, which uses natural water flow to generate power. Right now, Sudlow says, “we can last a couple of days without the sun, but we’re consciously planning around it.”