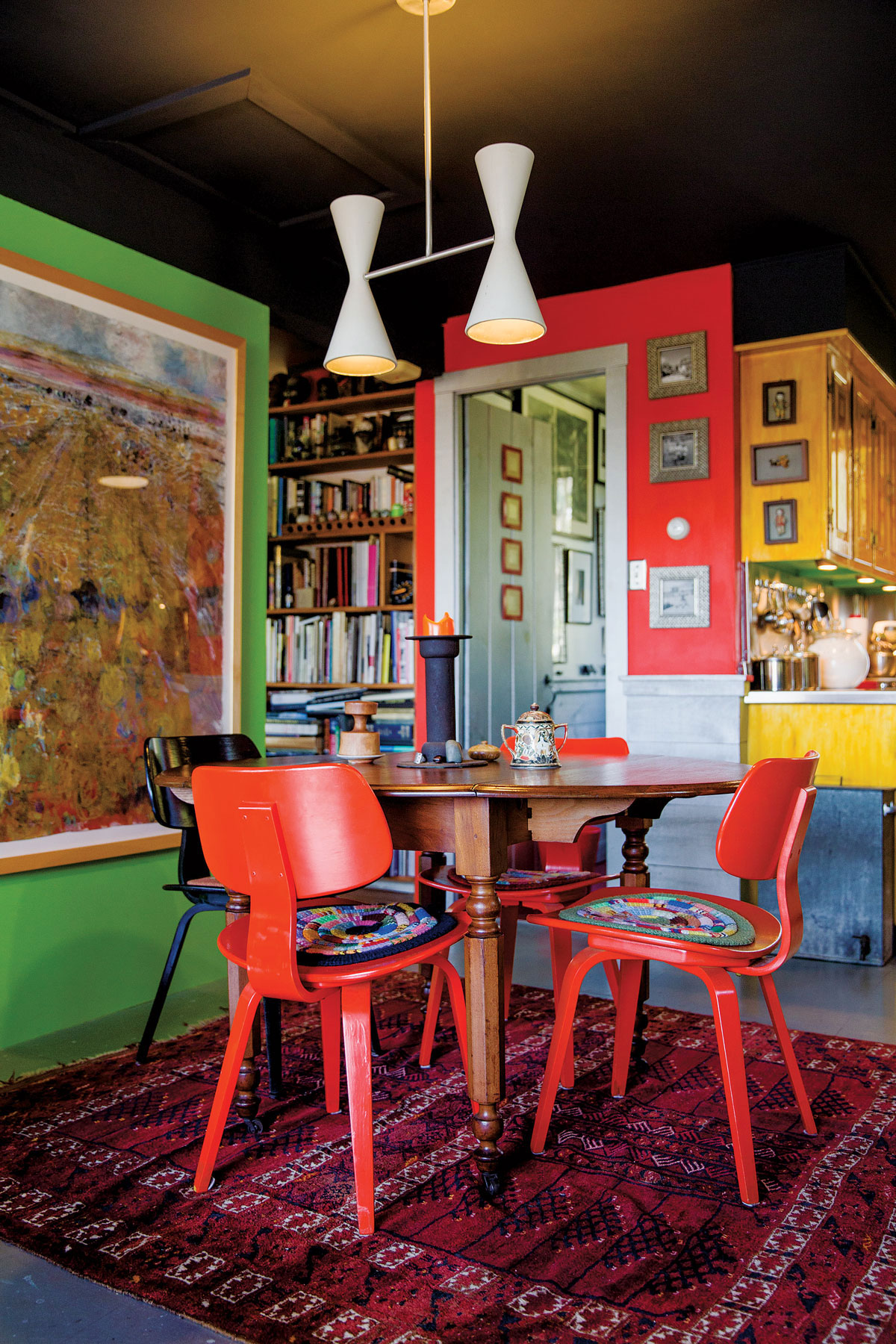 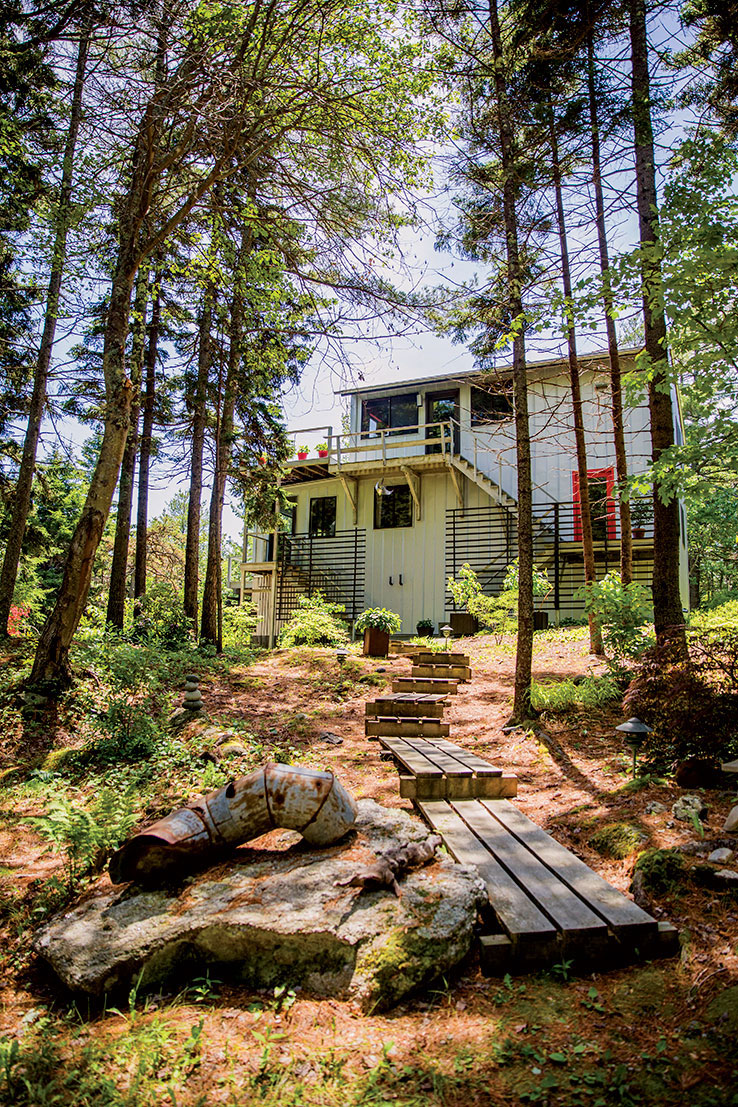 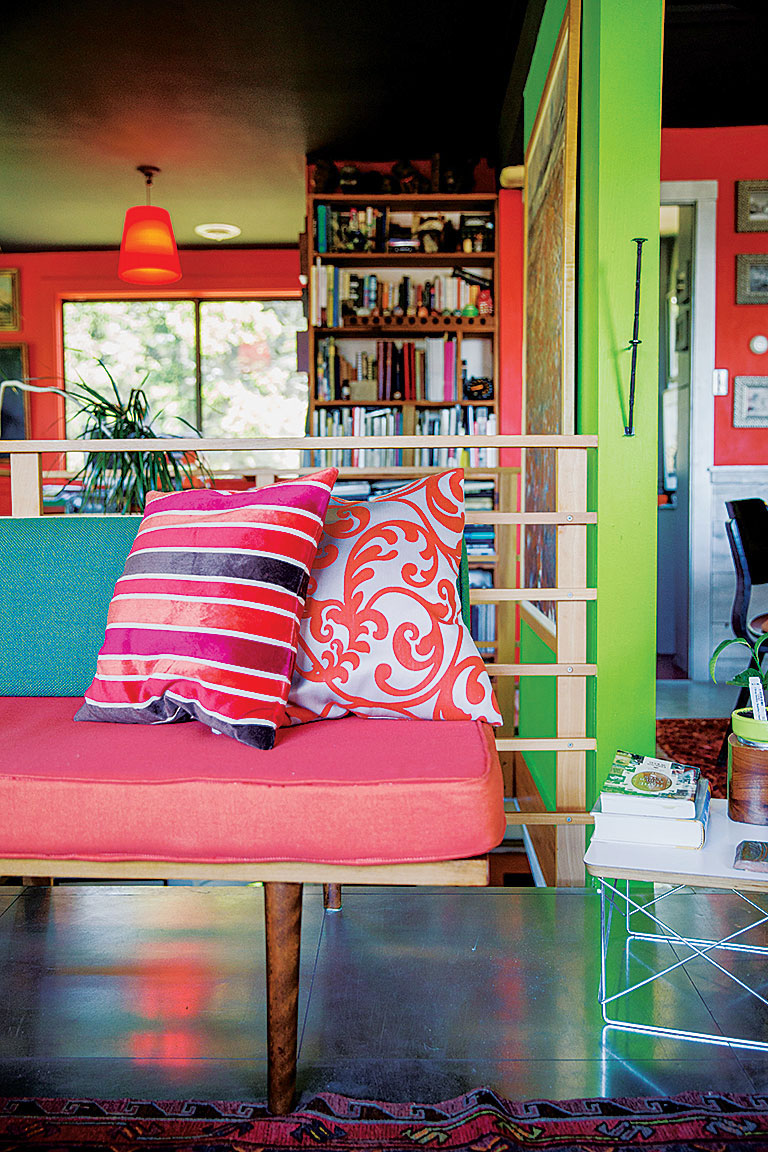 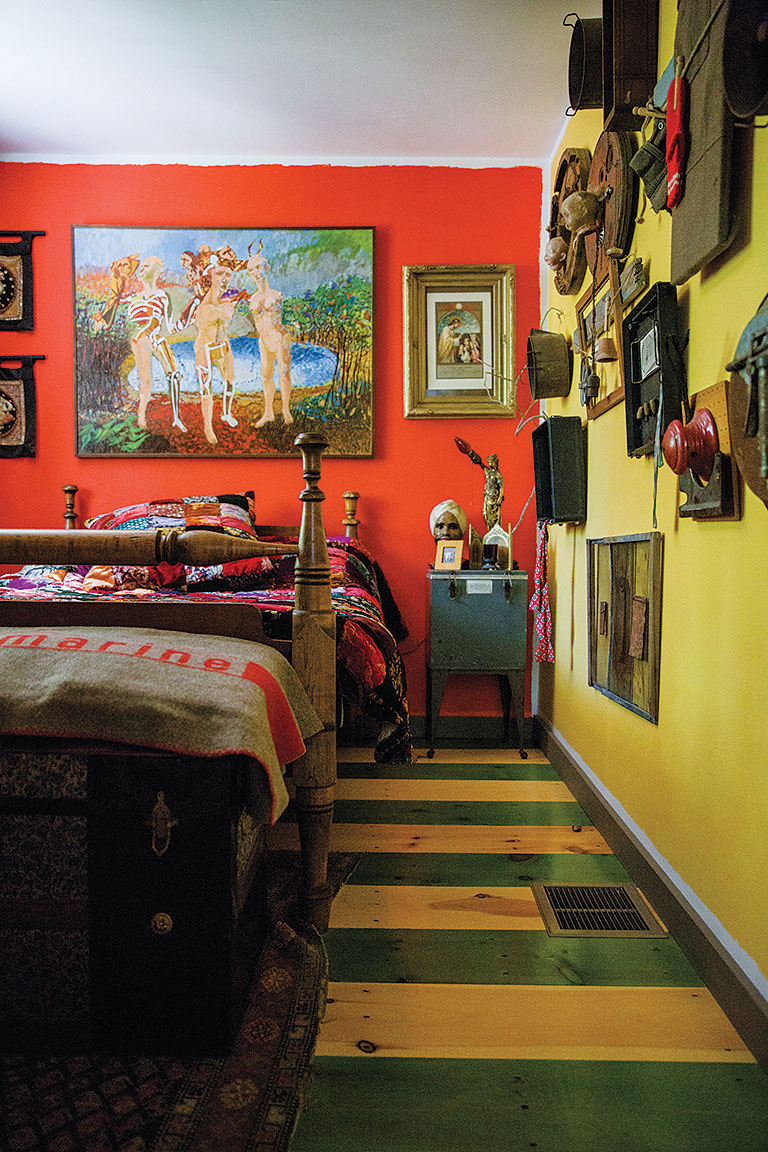 From the September 2015 issue of Down East magazine

[cs_drop_cap letter=”S” color=”#000000″ size=”5em” ]culptor Dan Dowd is known for turning found objects into art: his grandfather’s duct-taped work gloves, wool sweaters wrapped with inner tubes, industrial tiles shaped into giant pinecones. But his largest project has been transforming a peculiar house on a giant chunk of rock deep in the Phippsburg woods into an imaginative studio and living space.

When Dowd purchased the tall 1970s home a little more than a decade ago, it had both shakes and clapboard siding, rustic barn doors, metal sliding windows, and a reverse layout with the bedrooms on the first floor and living areas above. “I guess the owners thought, ‘We should have the view when our eyes are open,’” Dowd surmises.

The second-story outlook — over the pointy tops of pines to the dazzling waters of Atkins Bay, Popham Beach, Pond Island Light, and the hazy edge of the Atlantic beyond — is captivating. So are the brightly painted rooms, dark ceilings, old furniture, and collections with which Dowd has ornamented the interior.

Little of the house’s original appearance remains. Dowd replaced the mishmash siding with galvanized roofing material, hung vertically to make the house appear even taller. He painted the first-floor entry bright white and filled it with art. The floor is galvanized sheet metal. The bedrooms are painted rich red, green, and yellow — including the ceilings. A downstairs bathroom features “fluid marble” cut into long tiles to reveal the stone’s natural black and white striping. A worn table — built from a salvaged base and an old door — anchors his workshop, which is filled with piles of recycled materials and bathed in natural light.

The spicy-orange upstairs living space has an open floor plan, so Dowd added a lime-green accent wall to create a space to hang a friend’s painting. He has decorated the room with mid-century and antique furnishings and a coffee table that he built from old iron and wooden truck pallets that belonged to his father, who was a truck driver. The kitchen cabinets get their gleam from Chinese joss paper that Dowd pasted over gold paint and brushed with amber varnish.

Dowd has been buying antiques since he was 19, when he earned money for college by working for a furniture refinisher in Franklin, Massachusetts. He often gives objects a quirky twist, like the black Napoleon collar on a bust of Caesar. He’s also a landfill junkie who regularly drags home pieces for his work. “I try to restrict myself to no more than two times a week. I don’t want to be greedy.”

Standing outside on a deck that overlooks wild huckleberry, wooded paths, and a raised reflecting pond built from lumber and a pond liner, Dowd says, “This seemed like a house that didn’t know what it wanted to be. I helped it find out.”