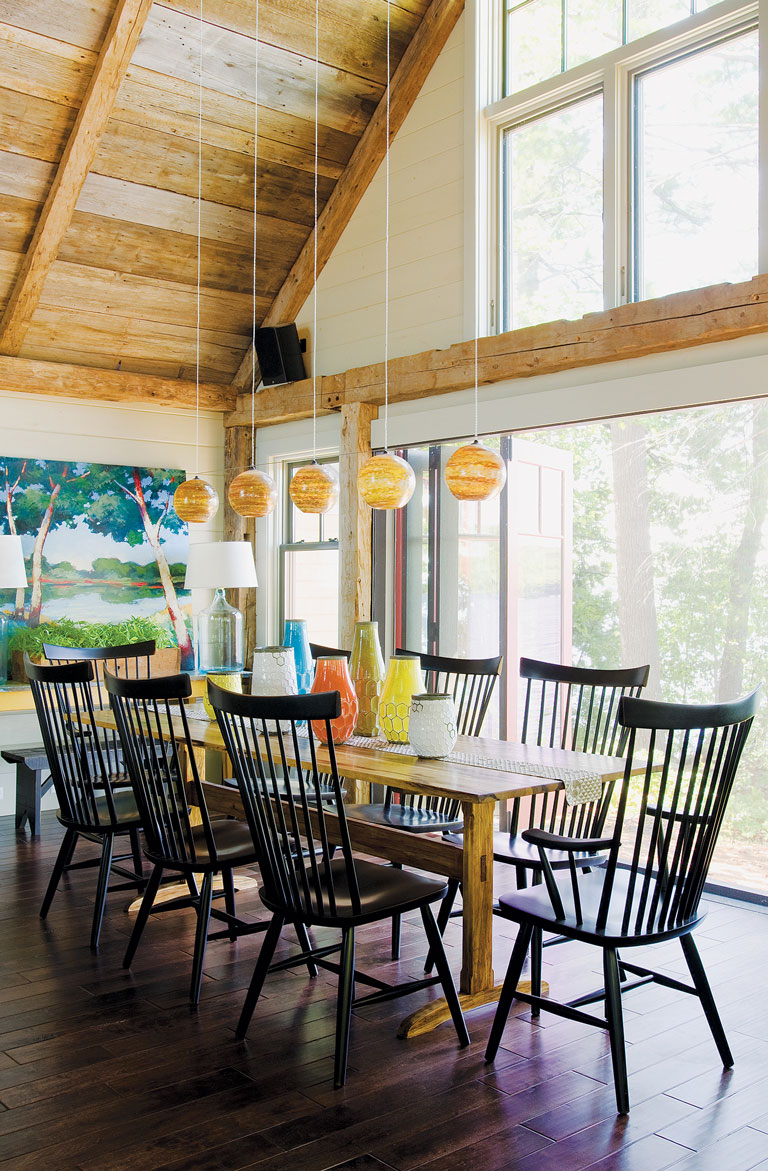 This lakeside cabin was built to comfortably accommodate a crowd.

Tucked under the lofty pines on a secluded central Maine lake is a family camp designed to accommodate the most guests while occupying the least amount of space. Built for a Boston family of five, this smart three-bedroom cabin has lodged as many as 27 guests, with a comfy bed for every adult.

To make it work, architect Art Dioli, of Olson Lewis, and interior designer Kristina Crestin, both from Massachusetts, collaborated with Vassalboro builder Ron Dunn to fill the cabin with abundant built-ins and double bunks.

“The space could only get so big, so we had to cram in utility,” says Crestin. The upper beds of the guest room and bunk room, with two full-size and four twin beds, are outfitted with safety rails made from random-size piping so they don’t feel confining. Built-in stairs, between the beds, include pullout drawers, with additional storage in hidden closets and under beds.

The 2,000-square-foot, one-story house was inspired by an older camp that once sat on the isolated point with eastern and western views of the lake. A central stone fireplace, inspired by that original structure, now fills the main gathering space, consisting of an open kitchen, living area, and dining room, with a wall of sliding windows that open to fully capture the outdoors.

“It feels like you are in a screened porch,” says Dioli, who hid pull-down screens above the window. “That timber frame is really a fake structure. We carved out the backside of [the main beam], and that is what the screens fold into so they disappear when not in use.”

Crestin maximized the dining space by choosing the longest table that would fit “so everyone can cram around there and play card games in the evenings.” Five hand-blown glass orbs from AM Studio of Toronto hang over the table, illuminating it without taking up living space.

A stone foundation and vaulted ceilings sheathed with salvaged barn boards give the cabin its patina. An eyebrow window above the back door allows additional light. In keeping with its rustic surroundings, the landscaping consists mainly of pine needles and camp chairs.

“We wanted it to fit in with our understanding of the Maine aesthetic,” says the owner. “At the same time, we wanted it to feel fresh and fun. We wanted to be able to have family and friends visit and be comfortable.”