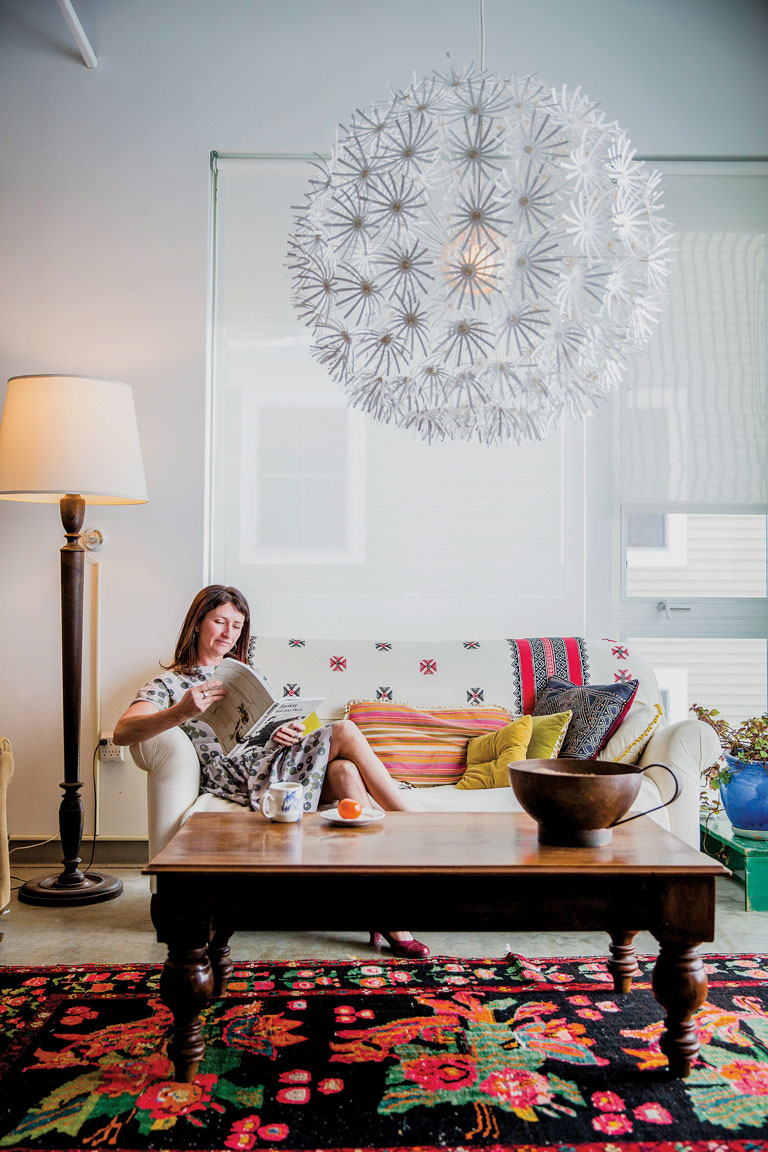 In a trendy Portland neighborhood, home and work come together nicely in one eccentric building.

[P]hotographer Megan Jones’ contemporary condo is a reflection of its surroundings: both are places where people live, work, and play. Nestled between Munjoy Hill and Back Cove, Portland’s up-and-coming East Bayside neighborhood is a lively stew of light industrial and commercial properties and multi-family homes. There, Jones lives in one of the eight live/work artists’ lofts housed in East Bayside Studios, a corrugated-steel building with two rooftop Quonset huts.

“At first I thought the neighborhood didn’t appeal to me,” Jones says. “Then Tandem Coffee Roasters opened up across the street. Bunker Brewing was already there. I thought, ‘Delicious coffee and beer? What more do you need?’”

The condo’s white walls, high ceilings, large windows, and concrete floors (ideal for sliding furniture around for photography sessions) also attracted Jones. Her bedroom in one of the Quonset huts faces the blocky high-rises and bright lights of Maine’s largest city. “It has a very lofty, airy, light feeling,” she says. “I knew I could happily work here, and I could happily live here.”

Jones uses furnishings — a mix of heirloom antiques and lucky finds — to create distinct areas within the open floor plan.

Built in 2002 by developer Peter Bass and architect David Lloyd, East Bayside Studios is modeled after industrial lofts found in cities like New York and Los Angeles. “The real definition of a loft is a big, old industrial space that gets converted,” Bass explains, “so this is ‘loft style.’”

Building the structure was made challenging by the fact that part of the neighborhood was developed on fill mixed with rubble from buildings destroyed in the Great Fire of 1866. Wright-Ryan Construction used a crane to assemble and lift the domed metal huts, which mimic those first manufactured in the 1940s by the Navy.

The interior layout of Jones’ condo is spare and simple. The efficient, no-frills kitchen is separated from the main living area by dividing walls. A spiral staircase leads to the rooftop bedroom.

Jones uses furnishings — a mix of heirloom antiques and lucky finds — to create distinct areas within the open floor plan. She has carved out an office/studio to one side of the gray tile fireplace and a cozy seating area to the other. Jones found one of her couches in a dumpster. She rescued the other from the back of a truck whose driver was on the way to the dump. The colorful woven rug is a yard sale find. The enormous hanging dandelion light fixture comes from IKEA and the vintage barkcloth throw pillows were made by a friend.

Down East is looking for homes with character that reflect what life in Maine is all about. Click here to nominate your home to be featured in Down East!