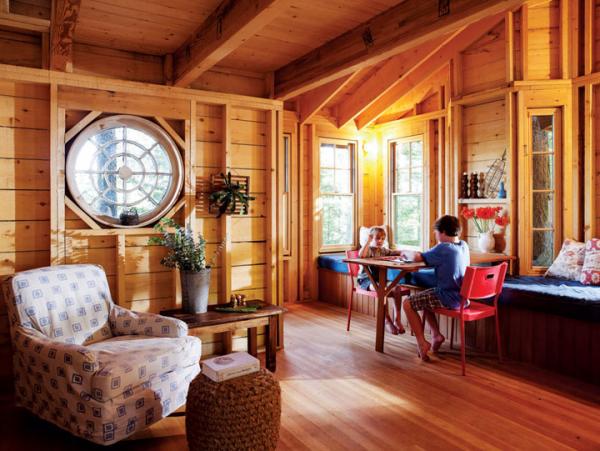 A family builds a child’s dream come true up in the treetops on the Maine coast.

Every kid dreams of building a tree house. It’s the stuff of childhood fantasies to be nestled among the trees, eye level with backyard birds, lazing away for hours sequestered from family. If you’re lucky enough to build such a treetop residence, it helps to have friends in high places.

When a summer family near the coast wanted to build a tree house retreat, their inspiration came from friends Pete and Judy Nelson. The couple has written books on the topic and are the owners of Treehouse Point in Issaquah, Washington.

It all began with a group email sent out by the homeowner with the proposed plan to build a simple tree house-inspired construction on top of an existing twenty-by-twenty-foot platform three hundred feet behind the main house. The idea was to keep it small — a mosquito-free camp that could act as overflow for guests and a funhouse for the kids.

After some initial conversations, bigger ideas began to take shape. The reality of making a childhood fantasy come to life meant a bigger budget and real expertise. The owners asked Mark Parker, their property caretaker and one of the builders on the project, to see if he could find a local architect who might help. “Two days after I got off the phone with them, I was out in the woods doing some work and my old neighbor, Dave Matero, was out for a run,” says Parker. “An architect ran right into me! It was perfect timing.”

Bath-based architect Matero began working remotely with the family, sharing ideas over the phone, going back to the drawing board, and looking at 3-D renderings of proposed designs. The original plan to build on the existing platform was no longer a viable option. On the advice of engineers, the house was instead built on stilts and the existing spruce trees.

“Since we were building off the beaten path, every board, shingle, and tool had to be carried in by hand,” says Parker. The labor-intensive process was led by Brent Akins, of Housewrights and Craftsmen, and his crew. The goal was to keep as many trees in place as possible as the cement base and stilts were placed in the ground. Even as the structure was being built up, they forged around the trees, not through them.

Parker hand-dipped each of the cedar shingles in Australian timber oil to keep the retreat perfectly camouflaged. “It took weeks, maybe months,” recalls Parker. “I set up a station of ropes hung up between trees to hang each one to dry. There were thousands of them.”

The retreat is virtually undetectable from every angle. An eagle-eyed kayaker paddling slowly by might catch a glimpse of it, but for everyone else, it’s hard to spot. “I know exactly where to look for it, and even I have trouble trying to spot it,” says Matero.

The interior was kept simple and unfinished using natural Douglas fir.  Every corner of its 350 square feet was carefully planned, making the most of the small space. Two built-in cushioned benches flank one wall and double as a sleeping space for two. A mahogany table folds down in between for meals or an impromptu game of cards.

Above the main living area is a loft, accessible only by climbing a ladder. Up top, a king-size bed and one exposed light bulb await — an ideal nook for bedtime reading and stargazing thanks to the skylight directly overhead.

A door off the loft leads to a tiny two-person balcony. The very brave can grab on to a well-positioned rope and scurry up to the top of the tree house and take in an even better view. “The homeowner wanted to be able to climb onto the roof and I thought it’d be best to install stairs or a ladder, but they didn’t want the added structure,” says Parker. “We compromised on the rope. I call it the ‘Oh, shit! Rope.’”
Though the original scheme to build on the platform did not work, it was kept intact and connected to the house with a twenty-five-foot swing bridge. “It’s hard to run across the bridge without smiling,” says Parker.

The platform serves as a perfect spot for grilling or using a fire pit at night. And then there’s the zip line. On any given day, the whooshing sound of it flying through the woods can be heard, usually followed by a delighted squeal.

Upon completion, Matero sent images of the project to Pete Nelson. He loved it, but decided not to put the house in any upcoming books for fear of upsetting purists who would claim it doesn’t count since it isn’t anchored atop a tree. That doesn’t seem to matter to anyone who hangs out there. “When you’re inside and look out every window and find yourself surrounded by trees,” says Matero, “you really do feel like you’re living in one.”

11 Pieces of Maine-Sourced Gear for a Summer Spent Outside