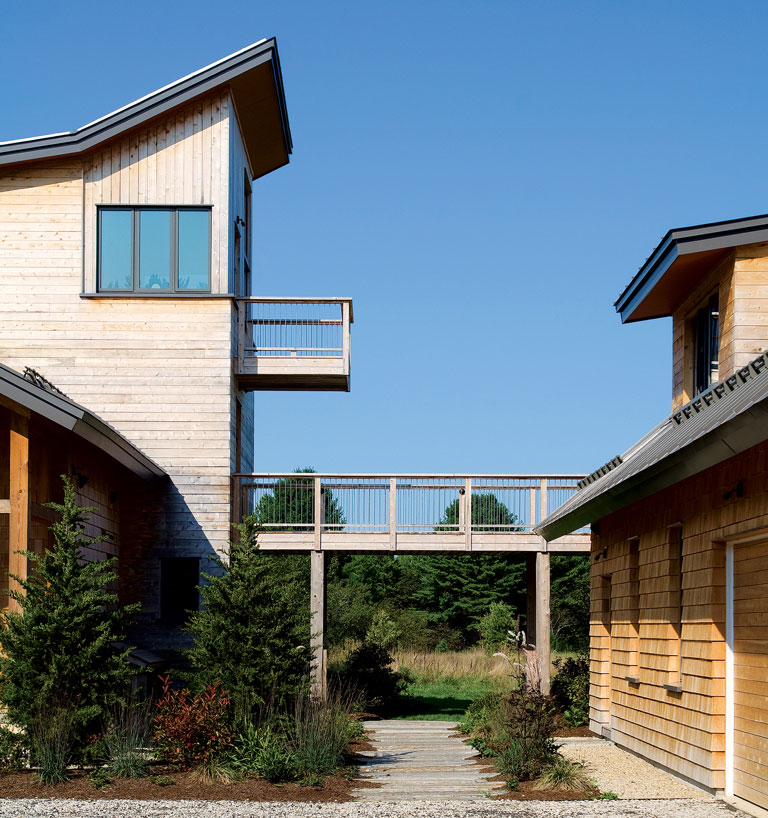 A drafty saltbox has been remodeled into a cozy and highly energy-efficient home.

From the September 2014 issue of Down East magazine

Solar technology has come a long way in the past few decades. Built overlooking a pond in Falmouth in the 1970s, this modified passive-solar saltbox was so drafty that “within 45 minutes of the sun setting, the house was cold as stone,” says owner Claudia King. In addition, the interior was dark and cheerless, barely offering a glimpse of the pond and cut off from the 10-acre property’s garden and fields by a scarcity of doors and windows.

King and her husband, Lindsey Tweed, hired Kaplan Thompson Architects and builder Dan Kolbert, both of Portland, to make the house more energy efficient and to improve the interior spaces and flow.

Because the project required gutting the entire structure, it would have cost less to build from scratch, King says, but “we liked our site, we wanted to use what we could, and we didn’t want to build something larger.”

An open floor plan and stair with built-ins show off the hand-hewn posts and beams that were recovered from a Maine mill and resort. Recycled floor slates line the wall behind a wood-burning stove in the family room, just off the enlarged kitchen.

A south-facing porch opens to a walled garden overlooking the pond, meadow, and vegetable patch. On the north side, a second-story gangway extends beneath what King only half-jokingly calls the “Tower of Power,” a third-floor office capped with solar panels. The panels produce 75 percent of the electricity used in the 3,750-square-foot house, while air-source heat pumps capture warmth from outside.

“It is much more comfortable,” says King. “In the old house, we weren’t producing anything. We are aiming for net zero.”

Sliding glass doors between the living room and foyer contain heat in winter, and skylights brighten the upstairs hall. A gangway connects the main house to a guest cottage that was moved to its current location from another site on the property.

“For a single-family home in a fairly rural setting, we are living as greenly as we can,” King says. “It is pretty cool to be able to live in a place like this.”