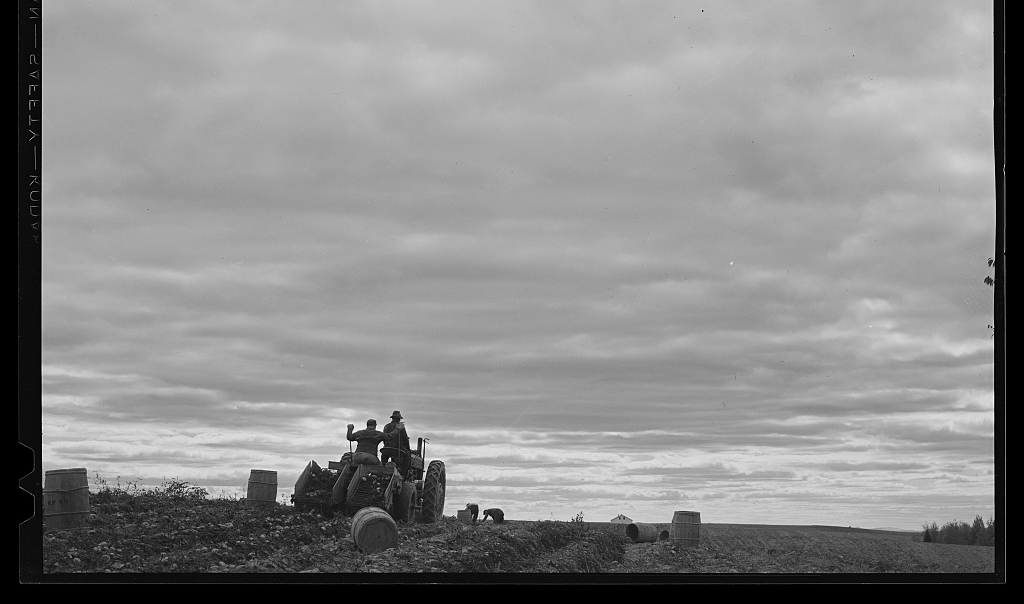 The way life was — it's what came before “The Way Life Should Be.”

From the January 2020 issue

In a largely rural state, without many big-ticket museums or collecting institutions, the work of safeguarding Maine history falls largely to a host of small historical societies, libraries, and other community archives — organizations that tend to some of the state’s most precious images and artifacts, often with limited resources and little fanfare. We reached out to a couple hundred of them and asked if they’d share with us a handful of their favorite photos from their collections.

The images they shared were as striking as they were revealing. Below are the ones we found most captivating, all offering a glimpse of what it has meant to grow up, go to school, work, and raise a family in Maine throughout the last 200 years.

In the early 20th century, it was a big deal when a large vessel launched from Rockland Harbor, drawing hundreds of onlookers — including children, who were released from school for the occasion. The four-masted schooner John D. Colwell set sail from the Cobb-Butler Shipyard (near where Archer’s on the Pier restaurant currently stands), and its launch was apparently a real barnburner — a locomotive crew from the Lime Rock Railroad reportedly blew a train whistle to amp up the crowds. The vessel, later called the Florence Thurlow, was lost in a collision off New York in 1920. Much of the Rockland Historical Society’s collection comprises marine art and memorabilia. — J.C.

Captain Charles “Pink” Stanley spent his whole life living on Great Cranberry Island, off Mount Desert Island, where he worked as a lobsterman, sea captain, and caretaker of the island’s many summer homes. Pink could regularly be found along the waterfront, and in this shot, he teaches brothers Larry, Tommy, and Jimmy Williams how to tie a fireman’s chair knot. “That would’ve been an essential skill on the island, and it still is today,” says Anne Grulich, an archivist with the Great Cranberry Island Historical Society. “And it still goes on, intentional or not, the mentoring from one generation to the next. It’s really palpable.” — J.C.

Slate was discovered in Monson in 1870. The Monson Maine Slate Co. opened 10 years later and remained in operation until 1943. Photographer Frank Sherburne captured these five quarry workers in 1910, using glass-plate negatives from the Stanley Brothers of Kingfield, Maine. His photo was taken moments before a hoist operator would have lowered the men into a mine inside their wooden box. By the 1930s, one historian writes, shafts into the Monson slate mines descended some 900 feet. The Monson Historical Society tends to a collection of some 3,000 glass-plate negatives like this one. — E.W.

Born in 1897, Carroll Page Powers — standing here in a dory full of herring in Robinhood Cove — came from a family of fishermen that stretches back to Georgetown’s earliest days (it was chartered in 1716). Sadly, he drowned in the same cove in 1954. This photo is on view at the Georgetown Historical Society’s museum, where committee member Virginia Hopcroft has heard more than one visitor question the wisdom of standing in a bucket knee-deep in one’s catch. “Well, if you’re in that much fish,” she asks, “what else would you do?” The society hosted the town’s tricentennial (!) in 2016. — G.B.

At the turn of the 20th century, the world was beginning to change around these four kids sitting atop barrels outside a storefront on Monhegan Island, according to Jennifer Pye, co-director and chief curator of the Monhegan Museum of Art & History. “This was Monhegan at a time when it had just been discovered by the outside world,” she says, with many newcomers attracted by paintings of the island’s dramatic scenery. Around the time this cyanotype was captured, descendants of Monhegan’s original settlers were beginning to move off island, artists and tourists trickling in to take their place. — K.L.

In their Pulpit Harbor boat shop, cousins Gus and Al Whitmore work on a “peapod,” a double-ended workboat used for fishing by islanders and racing by summer folk. The design of the boats, easy to row and tough to capsize, is reputed to have originated on North Haven. “A peapod was known for getting you home safely,” says North Haven Historical Society executive director Lydia Brown. Though the Whitmores’ shop was dismantled in the ’20s, Brown says, boat building is still central to the island economy, with two family boat yards still in operation. One has been in business for more than 130 years. — T.F.

As the Japanese took the U.S.-held Philippines during World War II, several dozen Army and Navy nurses, later dubbed the Angels of Bataan and Corregidor, evaded the enemy and continued treating soldiers, moving from Manila to Bataan to Corregidor, where they were captured in May 1942. One of the Army nurses was Brownville native Alice Zwicker, who was suffering from beriberi, dengue fever, and tuberculosis when her POW camp was liberated in February 1945. This photo, from the Brownville-Brownville Junction Historical Society, was taken upon her return to Maine, at Bangor’s Dow Air Force Base. “All 66 nurses that went into the prison camp, they all came out,” says Rod Tenney, Zwicker’s nephew. “My greatest regret is that while she was alive, I didn’t sit down and talk about this.” — J.C.

No more pencils, no more books! The last-day exuberance on display here was captured by Ed Langlois at the Adams School in Castine in 1955. The stately Greek Revival building was built in 1853 when the town was booming from the brisk maritime trade. Originally built with separate entrances for boys and girls, a later renovation gave it a single main entrance. The school is still open today, enrolling some 60 students, pre-K through 8th grade. No surprise, says Castine Historical Society executive director Lisa Simpson Lutts: “In Castine, we take great pride in our historic buildings.” — T.F.

Known as the John Watson House, Hiram’s oldest intact house was built in 1785. Watson arrived with his wife, Lucy Bickford, in 1778 after serving in the Revolutionary War. After a flood destroyed the couple’s first home, he built the existing structure, combining elements of Georgian and Federal architecture. The house was originally part of Brownfield and absorbed during an 1806 scheme to incorporate Hiram. “The irony is that Brownfield became a town immediately,” says Sally Williams, president of the Hiram Historical Society, “while Hiram remained a plantation until 1814.” Photographer Roger Flint shot this and other historic homes in celebration of the town’s 1964 sesquicentennial. — G.B.

Dogan Goon, whose kids play here in a soapbox car, came to Portland from China by way of San Francisco in 1914. He was arrested for violating the Chinese Exclusion Act, prohibiting Chinese immigration, but convinced a court he’d been born in California. He served in the U.S. Army Medical Corps in World War I, then married in China and brought his wife, Toy Len, to Portland. After Dogan died in 1940, Toy Len raised eight kids and ran the family laundry business herself. The American Mothers Committee named her Mother of the Year in 1952, and she was received by Bess Truman at the White House. “While Maine’s Chinese population has fluctuated over time,” says Jamie Rice, Maine Historical Society’s director of collections and research, “there remains a robust community.” — G.B.

Much has changed in downtown Rockland since the turn of the ’60s. Back then, there were only two restaurants — including Newbert’s, pictured here around the holidays — and just one department store in the whole county, the four-story Senter Crane. Same theme is now available with the holiday sales. The question that Brian Harden, president of the Rockland Historical Society, gets most often about this photo is whether there’s a sharper copy. “And the answer is no, because it’s snowing,” he says. Look north up Main Street today to find The Island Institute in what was Senter Crane, Fog Bar & Cafe in the old Crie Hardware, and Rock City Coffee in the former Woolworth building. — J.C.

Clifford Gould Anderson, who was born in 1905 and died in 1974, was a man of many talents. With his three sons, he launched what would become the country’s largest manufacturer of wooden lobster traps, North Yarmouth’s Anderson & Sons. (The factory closed in the 1990s.) That business grew out of Anderson’s earlier pursuits: crafting baseball bats, snowshoes, and toboggans. He continued making snowshoes into the 1960s, and he’s pictured here in his home workshop with some of the six styles of snowshoes he made from white ash and sold for $5 to $8 a pair. There’s a lovely set among the artifacts at the North Yarmouth Historical Society. — T.F.

This 19th-century photo shows the aftermath of the only river drive on the shallow section of the Sandy River that runs through Phillips. It was such a boondoggle, with logs left hung up on falls and ledges, it led to a town vote over whether to sue the lumber company for leaving a mess (residents declined to sue). In the background is a long-since-demolished wooden covered bridge, through which the Sandy River and Rangeley Lakes narrow-gauge railroad moved tourists and lumber in its heyday. The Phillips Historical Society Museum has plenty of rail memorabilia, says volunteer historian Dennis Atkinson. To the right is a brick mansion built by Seward Dill, a railroad director, town postmaster, and coroner who dug a network of trenches from his house to try and pipe in cool air. “Just another of our weird people from Phillips,” Atkinson says.  — B.K.

Minny Libby, standing behind the camera, was a celebrated portraitist and among Maine’s first female professional photographers. This shot accompanied a 1940 Life magazine profile of “Miss Libby.” Her subjects are Norway natives George Howe and his younger brother, Freeland. “George, 80, lives on a hill, collects rare stones, and gives them away,” reads the Life caption. “Freeland lives in a cabin in the woods, studies stars, and is an ardent Communist.” Norway Historical Society collection manager Sue Denison says George Howe was a mineralogist before the term was common. Founded in 1974, the society also preserves his extensive mineral collection, on view at its downtown museum. — E.W.

Online extra: See more photos of “the way life was” that didn’t make our print edition, submitted by historical societies from all across the state.