Franklin Burroughs on the anatomy of a phrase and the history baked into it. Reason #83 from our special bicentennial issue, "200 Reasons to Love Maine." 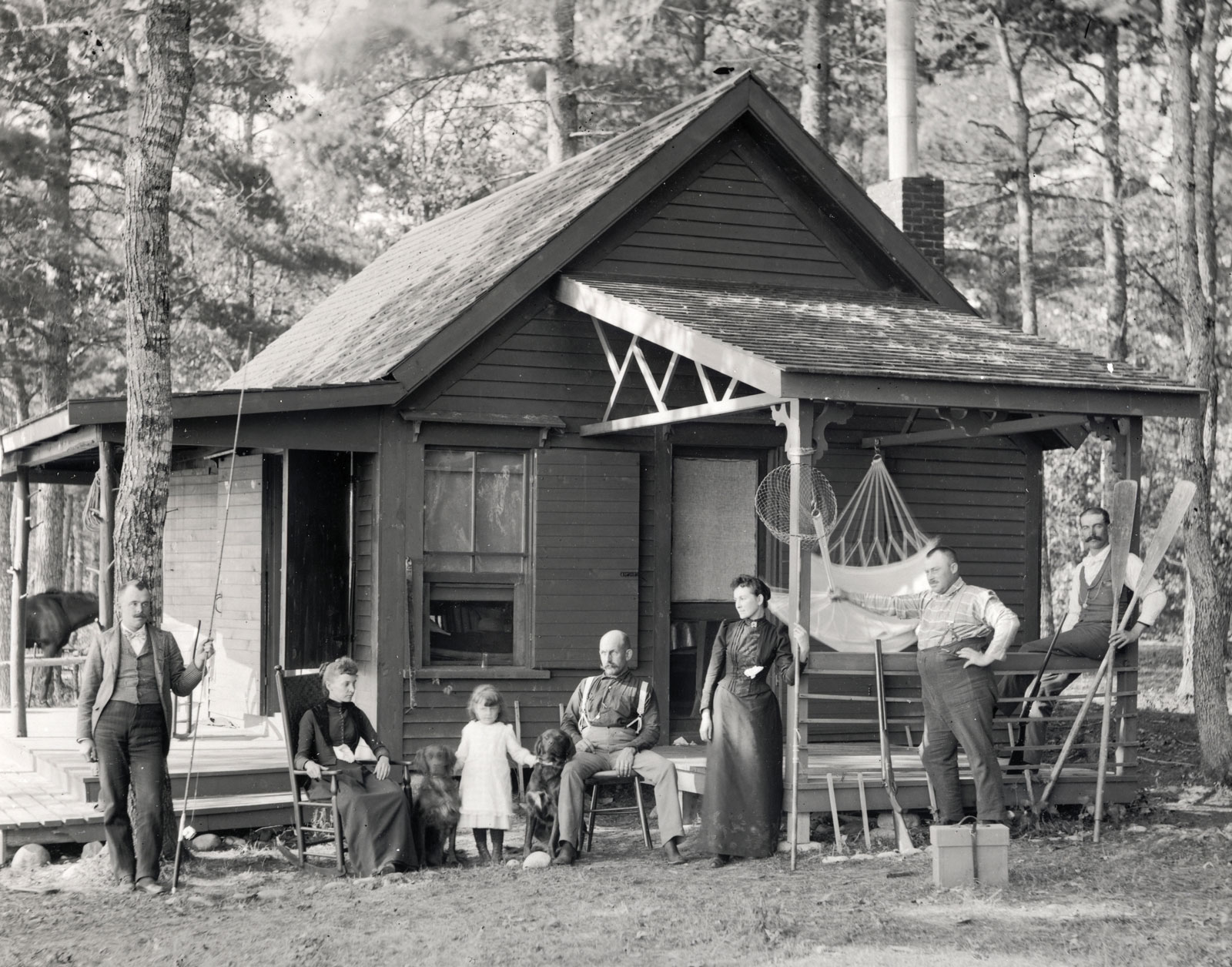 North is merely a direction of travel. It can get you to Maine. But within Maine, up north signifies a destination: roughly the upper half of the state, an area bigger than Massachusetts. It contains a few scattered towns. Everything else is officially classified as unorganized territories — civic divisions containing too few citizens to have any form of local government. These territories are mostly called townships, but sometimes grants, public reserved lands, gores, etc. They were originally laid out with the idea that they would attract colonists, whose settlements would eventually subdivide them into actual towns, thereby peopling the wilderness, improving land, raising property values, and repaying many times over the investment of the original proprietors. Things went according to plan in the lower part of the state. Up north, they did not. Decades passed, then centuries. The townships remained townships, and the region remained a kind of arrested frontier.

So going up to camp involves traveling backward as well as northward. To all appearances, history is still waiting to happen there.

I went up north for the first time in 1972. I’d heard promising things about the fishing. I went back a couple of times that year and haven’t missed a year since. Mostly, I went with my father, who had just retired. We always stayed in the same inexpensive rental cabin — one room, indoor plumbing, a hotplate to cook on, a small metal table to eat on, a small refrigerator. We left early for fishing, returned for lunch and a nap, then went fishing again.

No DeLorme Atlas in those days. The paper companies were still running pulpwood down the river on a daily basis. You drove on their roads — which were rough, narrow, and slow — at your own risk, trying to find your way to some pond that somebody had said was good. Sometimes.

A few times, I went up alone and stayed at a camp belonging to a colleague. He’d owned it for a decade or so and had fished that territory long before that. He knew the country. He’d bought the camp for a song. It was on leased land, and it was dilapidated, dark, stuffy, poorly screened, and beginning to sag. He was perfectly happy with it.

The spruce budworm outbreak in the mid-’70s changed everything all over the north woods. Paper companies began cutting on a much larger scale and building bigger and better roads to get logs to the mills, as though the only way to save the forest was to destroy it. We drove their wider, smoother roads through miles of clear-cut that looked like the Western Front circa 1917. The river drives ended. We kept fishing, learning a little more each year about where to go at what season and how to fish when we got there.

In 1985, without any warning, the lease on my friend’s camp suddenly increased tenfold. He’d always known it could happen. He kept his ear to the ground and heard that a fellow was selling off lots on a steep, short road that went up to the top of what was locally known as Hungry Mountain. He, I, and four others chipped in $2,000 apiece, bought a 5-acre lot, and proceeded to build a house there, a happy memory in itself. Then we incorporated ourselves, drew up some bylaws, and went fishing.

That was 35 years ago. My father was 78 years old, the age I am right now. He was leery about the camp. It had no plumbing, no electricity. We slept in a bunkroom, on double-decker bunks made out of 2×6 lumber left over from the construction. He’d lived in quarters like that in the Marianas during the war, coped with it, and had no wish to repeat it. Two years after he got back to South Carolina, a stranger to his 6-year-old son, he took me fishing. That never stopped — a lot of hours together in a small boat, on a river he’d fished all his life. It kept us close and aware of our differences. Then I moved to Maine. Not long after, he retired, bought a house in Harpswell, spent the summers there, and we went fishing — new waters, new ways of doing it, but within protocols that were second nature to us both. He wasn’t sure he wanted to share that.

Camp. The word came into English from French 500 years ago. As a noun, it was a strictly military term: a temporary base for troops sent out on some campaign that separated them from the main body of the army. The place in the Marianas where Daddy spent the war, for example.

Words, individuals, nations, and the earth itself all have histories. They are entangled. Before there were townships or Euro-Americans, there were successive groups of Native people. They lived in camps but had no word equivalent to ours, any more than they had a word for unorganized wilderness. Before them, there was the history of geography. Only 17,000 years ago, whales and porpoises frolicked over most of what now constitutes Maine’s organized territories. Today’s unorganized territories lay under ice a mile thick. Four thousand more years passed before northernmost Maine was free of ice. By then, the first people had arrived from the south. They found the deepest soils and richest habitats in the lands that had rebounded from the sea as the glacier withdrew. The climate and vegetation of northern Maine approximated what’s now found above the Arctic Circle.

The land rebounded further; the forest spread north. Four of New England’s great river systems took shape: the Kennebec/Androscoggin, the Allagash/St. John, the Penobscot, and the St. Croix. The first three converged to within easy portaging distance of each other at Maine’s Moosehead Lake. Successive generations of Native peoples established a network of portages linking rivers, streams, and ponds, enabling them to go from almost any point in Maine to almost any other point, also to cross over into the huge St. Lawrence watershed. The Europeans arrived, expropriated this system, and used it for their own purposes, the chief of which was logging, a North American industry hitherto monopolized by beavers.

Demand for wood was global and insatiable. The supply in northern Maine appeared unlimited, and the infrastructure for transporting it down to the mills and ships —the rivers — was in place. To turn trees into money, all you needed to do was send an army of men and draft animals into the woods in winter, provide them with food, fodder, and some sort of shelter until the thaw came, then shepherd the logs downriver — dangerous work, but river drivers, like fellers, teamsters, horses, and oxen, were expendable. It was a vast, logistically complex operation, utterly analogous to a military campaign. So what were you going to call the temporary settlements that sprang up like ice-fishing villages every winter? Camps, of course.

Absentee ownership has always prevailed in Maine’s unorganized territories. From the beginning, this ran counter to a deeply rooted American assumption, that hunters, trappers, and fishermen were free to pursue their quarry whenever, however, and wherever they wished and that unsettled country was a kind of common. Trappers and market hunters presupposed the right to build themselves camps in the Maine woods. Like it or not, the legal owners of those woods, mostly timber companies, learned to live with it — and, as the north woods became more accessible, to profit from it.

Railroads reached the woods, and suddenly tourists and sportsmen represented opportunity. The companies could open lodges and inns or lease land for that purpose. And as a matter of public relations, they permitted the use of their roads to gain access to the north woods’ rivers, lakes, and mountains. They leased small parcels of heavily cutover land for modest prices, and they permitted camps, like the one my friend had, to be built on them.

My father came around on the matter of the camp on Hungry Mountain. Usually, when we went up, we’d have it to ourselves, and he’d be relieved. But there came a day when he remarked that he used to be disappointed when we found someone else there ahead of us; now, he was disappointed when there wasn’t. I had observed this but hadn’t expected him to admit it.

He continued to go up until his last summer, which was 15 years ago. Since then, two of the founding members have died, replaced by people who’d been to the camp as guests and took to its ethos. The building — board and batten, unplaned wood — has weathered into its surroundings. It has no foundations; the joists are spiked to posts that sit on small cement pads. The windows were salvaged from a demolition site; the furniture, small gas stove, woodstove, pots, pans, utensils, sink, etc. all came from various barns and attics. Two 5-gallon water jugs sit under the sink; a 10-gallon jug sits beside it. They represent our plumbing. Fill the smaller jugs at a roadside spring, lug them inside, empty them into the big jug beside the sink. Before you leave, be sure the big jug is topped up, the camp swept out, the kitchen table wiped clean, the trash collected, the gas turned off.

You always leave things as you found them; next time you come up, a week or a month later, no matter who has been up in the interval, you find them as you left them. Unpack. Go fishing. Drive the log roads. Pole the canoe upriver. Get back to camp late. Eat, sleep. Rise early — about 4 a.m. in June. Before you have the coffee started, the first log trucks are rattling and banging along down on the highway, heading up north for the first load of the day. Up north, down south, the same story: time is money, money is life. A little after that, tentative at first, a robin, then another. And now, from the low thickets, hermit thrushes up and down the hillside, flute-like and dream-haunting. Reveille. You’re up to camp. Rise and shine. Rivers await.