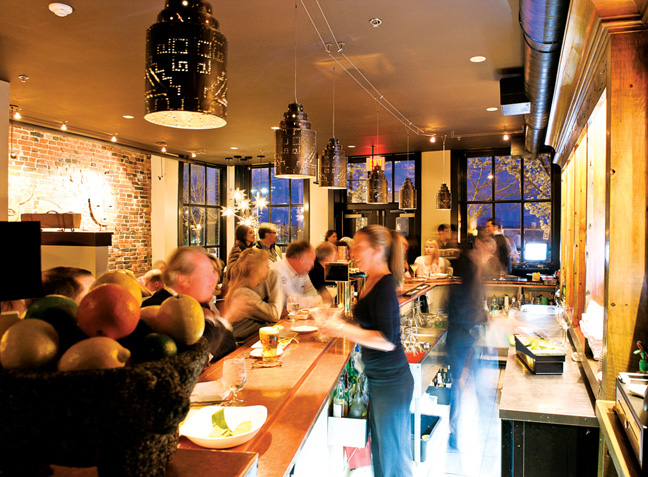 Gorditas, ceviche, chili rellenos, and carnitas: Until recently, these Mexican specialities — along with fiery chilies and wide tequila selections — were hard to find in Greater Portland if you wanted something other than the cheese-drenched gringo versions. Now, all that has changed. Within a few-mile radius of Longfellow Square, you can find authentic (and inexpensive) takeout at Taco Trio; modern Mexican at El Rayo; burritos, tacos, and lots of tequila-based cocktails at Taco Escobarr; and high-end moles and ceviches at Zapoteca. “People are craving something besides standard American fare,” says Tom Bard, who owns Zapoteca with his wife, Shannon, and their business partner, Sergio Ramos. “They want flavor and spice. It took a while for that trend to get to New England, but it’s definitely here now.”

The arrival of Zapoteca, which opened in June 2011, adds a welcome fine-dining component to the region’s Mexican options. And it’s a high point for the Bards, who’ve been married for nearly fifteen years and have four kids. They met in California in the early 1990s, when they both worked in management for a corporate restaurant chain, then moved to Maine in 2000. Recently, Tom’s corporate responsibilities were winding down, and Shannon was studying at the Culinary Institute of America’s Latin cuisine program in San Antonio. They briefly kicked around the idea of opening a high-quality farm-to-table restaurant, perhaps with an emphasis on authentic Mexican cuisine. Then, as Shannon finished up her last classes in San Antonio, she got a call from Tom. “He said, ‘We’re opening the restaurant and I’ve found the location.’ He’s very driven and passionate — if he says he’s going to do something, it happens,” she says, laughing.

The brick building on Fore Street had formerly housed a short-lived pizza place and, before that, the martini bar Una. The spot came with a wood-fired oven, which enabled Shannon to develop recipes that take advantage of its built-in smokiness and depth of flavor. Meanwhile, Tom developed a wine list that emphasizes boutique wineries from Latin countries — part of his ongoing effort to convince diners that beverages other than margaritas and beer can complement Mexican flavors beautifully. And Ramos began curating what is likely the state’s largest — and certainly the most carefully selected — array of tequilas (110 of them at last count).

The décor at Zapoteca — named for a Mexican god — is simple and elegant: dark wood tables, chocolate brown banquettes and, in the dining room, a display of Mexican masks. The separate bar area includes a twelve-seat bar and a number of small tables — the perfect spot to try one of bartender Jess Federico’s cocktails. The habanero watermelon margarita has quickly become a mainstay, though its primacy may be challenged by an array of mezcal-based drinks. The Mezcalita de Pina, for example, is an unusual and tasty combination of the agave-based liquor, grilled pineapple, cilantro, and fiery slices of jalapeños.

And while there are plenty of low-heat options on the menu, Zapoteca’s chili-powered flavor combinations are the main attraction. Ceviche veracruzano, for instance, comes in a tall martini glass surrounded by a tangle of fresh tortilla chips. Fresh white fish is “cooked” in lime juice and served with a spicy salsa of tomatoes, jalapeños, and green olives. Among the entrees, which include a local beef filet with garlic chipotle mashed potatoes and an ancho chipotle sauce, the pork carnitas should not be missed. Pork shoulder is braised until it falls apart, then pressed, cut, and crisped in the wood oven and served with pickled red onions, black beans, and homemade tortillas. It’s comfort food, Mexican-style.

The dessert menu is short but well conceived — a reflection of what Shannon  says are her “control freak” tendencies. She’s working to expand the dessert list; in the meantime, you can’t go wrong with the flourless chocolate cake made with chipotle pepper and rich Mexican chocolate. “As we develop new dishes, we’ll be making sure that they have a clear Mexican influence and are based on traditional ingredients, while at the same time reflecting an out-of-the-box approach,” says Shannon. “We really want to broaden people’s view of what Mexican food is.”