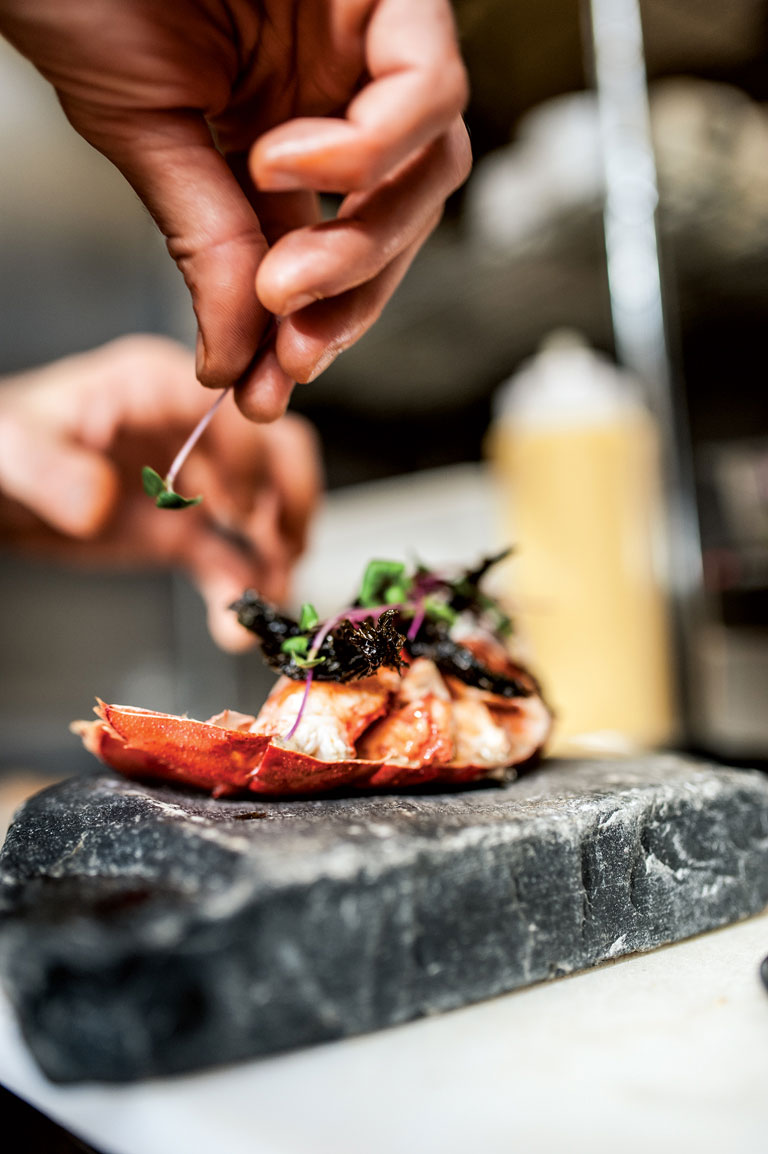 [Y]our cocktail contains beet juice, and the wines are all organic (some are also biodynamic and wild-fermented). The broth for your mussels is composed partly of whey. The gluten-free components and provenance of every dish are described in minute detail. And at the end of your meal, the check arrives in an old book of poetry. There’s a fine line between a precisely executed meal intensely focused on local ingredients and a Portlandia sketch — and Vinland teeters right on the edge.

“I thought, here we are, a little bootstrap restaurant trying to make delicious food, and we happen to use all local ingredients,” says chef-owner David Levi, “but it turned out to be a trickier thing in terms of public perception than I ever would have guessed.” Vinland’s commitment to be 100 percent local — no olive oil, no lemons, no cane sugar, and few of the spices most restaurants count on to add depth and complexity to their cooking — is “our greatest trump card as well as the albatross around our neck,” Levi says. “It attracts a lot of people and repels a lot of others.”

Funded in part by a Kickstarter campaign, Levi’s restaurant is very on-trend. It doesn’t hurt that Levi trained at Noma, the Copenhagen restaurant run by René Redzepi that has been called the best restaurant in the world. He went to Noma because of his interest in foraged wild foods, but he left with Scandinavian influences that extend to Vinland’s décor: spare and streamlined, finished with blond wood and birch-branch art. Some early courses — including an amuse-bouche of chèvre and herbs on a house-made beet chip — are served on smooth rocks gathered from local beaches by Levi, his staff, and his landlord. “I recognize that serving on stones is a bit of a New Nordic cliché, but I think they’re really beautiful,” he says. “It’s an eating experience that fits in with the cuisine on a philosophical and aesthetic level, in terms of drawing us closer to the land, but it’s also playful and fun and unexpected.”

Levi’s vision for Vinland is lofty: In a 19-point manifesto published on the restaurant’s website that quotes both Che Guevara and Wendell Berry, he shares his thoughts on topics including food aesthetics (good), modern grain production methods (bad), the coming crash of the industrial food system (good and bad), and a restaurant kitchen culture that is defined by “negative reinforcement, shaming, misogyny, racism, homophobia, glorified substance abuse, callousness toward living beings, wastefulness, and disdain for ethics” (really bad).

That’s a lot of pressure to put on dinner — especially in the bleak midwinter, when the evening meal is as much a beacon of warmth and comfort as a source of essential calories. It’s also a challenge to serve an enticing meal sourced from local ingredients when the harvest is long past and root vegetables have lost their luster. Yet Levi finds the restrictions — which he says aren’t all that restrictive in the first place given the breadth of purveyors with whom he works — a source of creativity.

Levi’s dishes are clean and simple, sometimes to the point of austerity.

Indeed, Vinland’s kitchen manages to make even the most pedestrian ingredients appealing. Behold the lowly turnip, transformed into a luxurious, creamy soup topped with delicate edible flowers and herbs — a hint of the blooms to come as the days lengthen. In a warm winter salad, bitter radicchio mellows when roasted with potatoes and laced with melted cheddar.

Levi’s dishes are clean and simple, sometimes to the point of austerity. Our server alerts us to the fact that seafood and meats are served in roughly 2-ounce portions, allowing diners to take advantage of three-, five-, or ten-course tasting menus without having to surreptitiously unbutton their pants before dessert.

A cluster of mussels arrives in a clear, whey-based broth, along with garlic, ginger, and a take on that old New England staple, brown bread — this one made of oat flour, applesauce, maple sugar, and egg whites. Vinland’s version of beef tartare, simply labeled “Raw Beef” on the menu, is light and fresh, topped with strips of pickled onion, thin cranberry and horseradish shavings, and a scattering of micro greens.

Pork capocollo — one of Vinland’s signature dishes — is a sous-vide preparation, meaning it’s vacuum sealed in plastic and cooked at a lower-than-usual temperature. That process would normally be verboten at Vinland, where Levi eschews the use of plastic. But the cut, a deboned pork butt, arrives vacuum sealed by the purveyor, so Levi lets it slide. The long, low-temperature cooking time breaks down the meat’s connective tissue, resulting in a tender, medium-rare portion that is then smoked and served with cabbage and fennel.

The winter dessert menu at Vinland, meanwhile, may prompt flashbacks to 1970s natural food stores — think parsnip custard and buckwheat sandwich cookies, along with an apple crisp dutifully covered with a thick layer of granola.

As an intellectual exercise — is it possible to build a fine-dining restaurant in northern New England on local ingredients only? — Vinland succeeds wildly. But it remains to be seen whether Levi’s experiment can attract large numbers of diners in Portland, where options for a $200 dinner for two with a local emphasis (if not a manifesto) aren’t hard to come by. “I stand by it 100 percent,” Levi says confidently. “Some people love it; some people don’t. But I know it comes from a good place, and that’s what matters.”