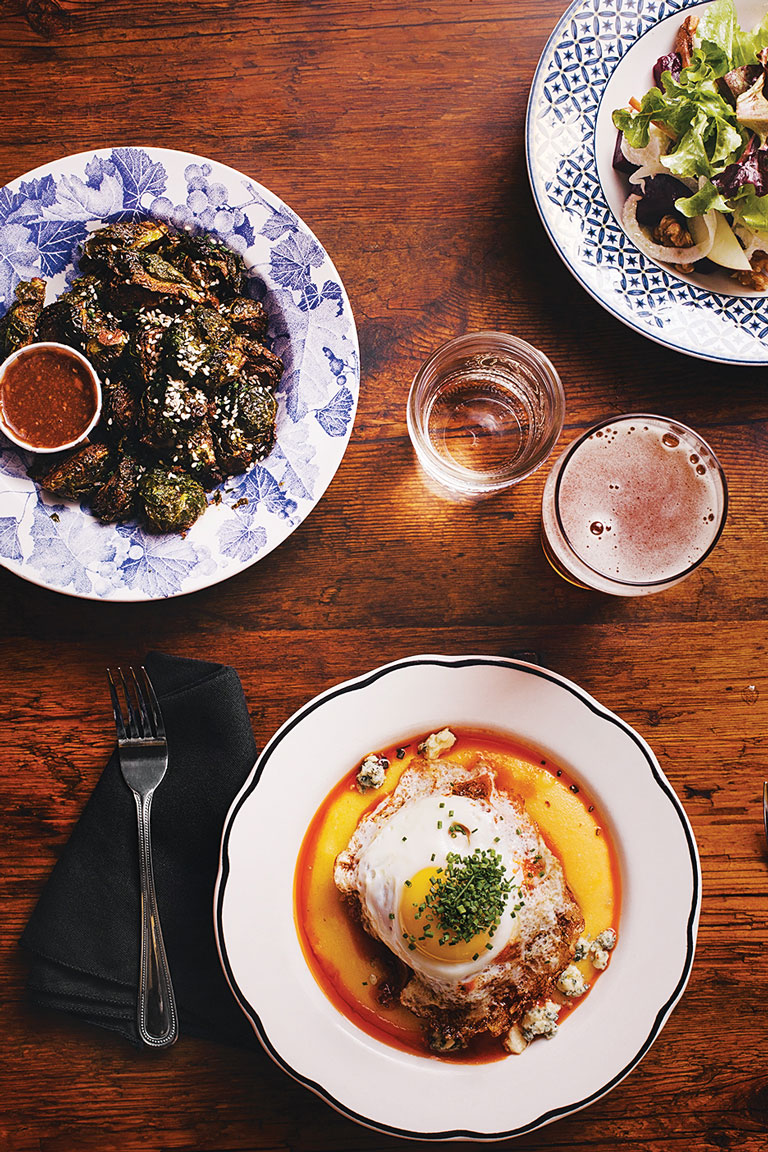 Unless one is a serious fan of Sarah Orne Jewett, it’s forgiveable to know little about South Berwick. The small town perched on the Maine-New Hampshire border is home to the beloved author’s 1774 family homestead museum, a pilgrimage to which has long served as a primary destination for visitors. But a new neighbor — whose owners have family roots dating back as far as Jewett’s — is creating its own draw.

That new addition is a restaurant called Thistle Pig, opened in May 2014 by Ben Hasty and his partner in business and in life, Jen Fecteau. Both in their early 30s, they live just seven miles down the road from the restaurant at Breezy Hill Farm, which has been in Hasty’s family for over 300 years. It’s still run by his parents and supplies the restaurant with meat. You can’t get much more farm-to-table than that.

Hasty has not only spent most of his life on his family farm, but he also trained at Atlantic Culinary Academy and did a stint at Thomas Keller’s lauded French Laundry. He most recently served as both executive chef and manager at When Pigs Fly Pizzeria in Kittery. He personally knows some of the critters that come across his cutting board, and he visits and inspects facilities — such as New York’s Hudson Valley Fois Gras — to make sure operations are up to his standards.

Same with produce. Many of Thistle Pig’s purveyors are local farmers, a couple of whom Hasty worked for as a teenager. As with many restaurants that emphasize what is fresh, seasonal, and available, Thistle Pig’s menu changes daily. Fall, Hasty says, was awash in squash. Apple fritters made an appearance on the dessert menu. Hasty says he likes to offer food that matches how it feels outside. With the onset of colder months, he brings on the stews and the braised meats, fish, and veggies. His backyard smoker gets quite a workout too, be it for a smoked calamari entrée or a half chicken that is sourced from a farm in Wells.

That was the couple’s goal from the outset — to create a place where people could drop in for a beer and a couple of sliders on their way home from work, take the family out to dinner, or celebrate a special event.

The restaurant is wedged among storefronts at the crossroads that forms the town square. The dining room’s cheery cornmeal-yellow walls soar to a lofty chocolate-brown ceiling. On the other side of a partition is the bar, dominated by several high-tops and a 12-seat bar made from repurposed oak. A variety of lighting fixtures, including Edison-style bare bulbs, illuminate the space — bouncy and bright on the bar side, more sedate in the dining room. Farm implements and tools that were nabbed from family barns or donated by neighbors decorate the walls. There is not a single new plate in the house. The charmingly mismatched dinnerware was largely collected from friends’ and relatives’ cupboards and from thrift-store finds. The overall effect is Sunday supper at your foodie grandparents’ house.

That was the couple’s goal from the outset — to create a place where people could drop in for a beer and a couple of sliders on their way home from work, take the family out to dinner, or celebrate a special event. Service at Thistle Pig is an ideal combination of good training and an “I’m really happy to work here” spirit, proving you can be chummy with your server and still have your cutlery changed between courses. Hasty credits Fecteau’s formal front-of-the-house experience at Wentworth by the Sea, as well as hiring the right people.

Sip a flavorful rye old-fashioned or a pint from one of six carefully selected taps (among them a newcomer, Tributary Brewing in Kittery) while you peruse the menu of small plates and entrées. The velvety fois gras mousse appetizer is served on a wood plank, accompanied by slabs of grilled bread, fig jam, and peach compote. Smoked mackerel is tossed with a riot of greens atop a puddle of aioli. Fans of brussels sprouts will be bowled over by Thistle Pig’s, which are fried to crunchy perfection and served with a thick sesame, chili, and ginger paste. Sprout loathers might roll their eyes at the suggestion that this dish is so good, it could almost stand-in for dessert, but then, all the more for the rest of us, right?

What could be better for a main dish on a chilly Maine evening than a house-made cassoulet for two? Pork belly, garlic sausage patties, and braised duck perch atop a bed of al dente Jacob’s cattle beans and a sifting of garlic breadcrumbs. With portions so ample, you might look forward to a cassoulet redux at home with the leftovers. And if you can possibly squeeze in one more bite, think about Fecteau’s homemade panna cotta or chocolate stout cake. What you can’t finish will keep your cassoulet company on the way home.