Hard cider is part of Maine’s heritage, and a new Belfast bar is betting on its renewed a-peel. 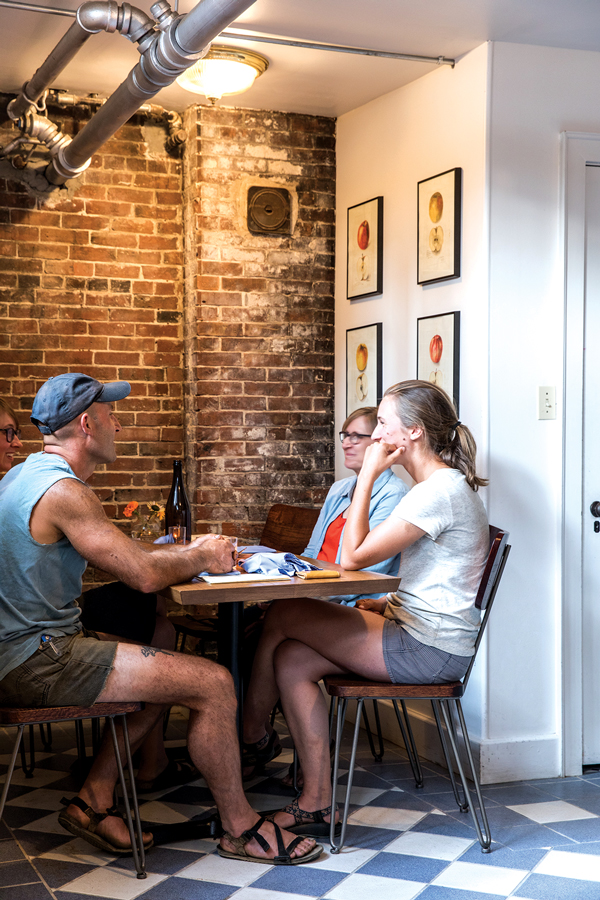 Five years ago, Maine’s hard cider revival was in its infancy. Today, the state (and the Northeast) boasts such an abundance and range of ciders that a new Belfast bar pours almost nothing but. As far as owner Khris Hogg knows, the rathskeller he opened this spring, Perennial Cider Bar + Farm Kitchen, was New England’s first contemporary cider bar — and its only, until Portland’s Cider House opened in August. The menu of draughts, bottles, and flights includes ciders made with foraged apples, aperitif ciders, barrel-aged ciders, and more.

In 2016, Hogg and his wife, Lizzie, were living in Washington State and looking to move someplace with affordable farmland. When they spotted a listing for a 28-acre homestead in Swanville, they bought the place without ever visiting. After moving to what the Hoggs have dubbed Sight Unseen Woods, Khris attended the Maine Organic Farmers and Gardeners Association’s annual Apple Camp, a woodsy summit of orchardists and apple enthusiasts tasting ciders, swapping directions to forgotten orchards, and trading tips about fungal duff.

He was hooked. So this past April, he opened Perennial in a cozy cellar on Belfast’s Main Street. One wall is rough-hewn granite slabs with crannies filled with votive candles. On another hang naturalistic prints of apple varieties, each shown whole and then cross-sectioned. A copper-top bar fills most of the room.

Owner Khris Hogg at the bar.

From behind that bar, Hogg dispenses some two dozen ciders and, if you’re up for it, an almost evangelical dose of cider education. From Portersfield Cider, in Pownal, comes a knockout Original Dry with seedling apples. Fruit trees are usually grown from grafted stems, not seeds, Hogg will tell you, to prevent genetic variation and propagate established varietals. Seedling apples, by contrast, often aren’t great for eating but can produce yummy, complex ciders. Bent Bough Cider, in Newburgh, uses foraged apples, found easily in Maine, to produce a tannic, red-winey cider. High Ridge Farm, in Montville, makes a cider that’s unfiltered and still — that is, not effervescent, so no bubbles get in the way of the bright and melony taste of the fruit.

Shots, Shots, Shots!
No, not apple brandy. Instead, a non-alcoholic shot of cider vinegar (in water, to cut the kick) from Lincolnville’s Sewall Orchard, the oldest organic orchard in Maine.

For food, Hogg offers pintxos, open-face toasts in the style of Spain’s Basque country, where cider has been a specialty for centuries, plus other snacky bites that change with the seasons. In April, he made pistou with wild greens and onion seedlings from their farm. In August, he foraged daylily petals for a tomato salad with smoked eggplant and radicchio, dressed in a birch-syrup vinaigrette.

Of course, not everything’s local. Ciders from away include one from French cider maker Eric Bordelet — an old master, Hogg says — another from New Hampshire’s Farnum Hill, and another from Vermont’s Eden Specialty Ciders. The goal is to offer a wide view of the cider world. Still, a plurality of what Hogg pours is pressed within a few hours of the bar.

“The way that the list is proportioned reflects a view of where the activity is happening in traditional cider,” Hogg explains. Translation: for fans of hard cider, Maine is at the core of the scene.

Ski In, Eat Out at Oxbow’s New Beer Garden