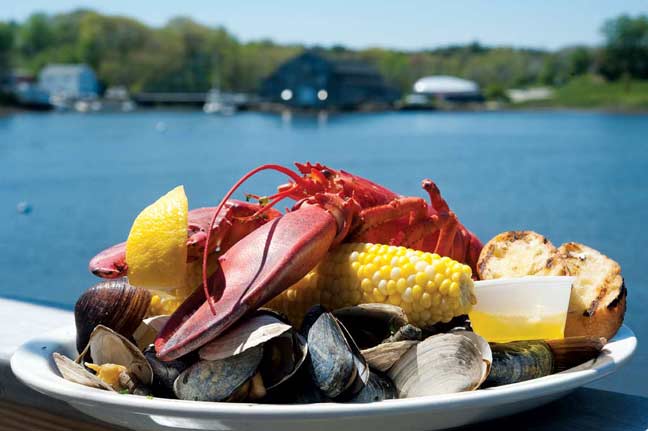 The Slipway in Thomaston, on the tidal St. George River, has great seafood — and an even better view.

Choosing a restaurant with the prettiest setting on the Maine coast is a fruitless task — dozens would be in the running — but when the tide is high on the peaceful St. George River, the Slipway, Scott Yakovenko’s new venture adjacent to Thomaston’s town dock, would definitely be up there at the top of the list. Former chef-owner of Port Clyde’s famed Dip Net, Yakovenko scouted the midcoast for almost two years before buying the former Harborview Restaurant, renovating the kitchen and interior, and adding a 120-foot pier with picnic tables,  umbrellas, and a wet bar for dockside dining. The Slipway opened in the spring of 2011. “We’re really lucky to have found this spot,” says Yakovenko. “It has tremendous potential, and we envision adding a few moorings and boat slips (we have ten feet of water at low tide), and we may even cut some fish on the docks.”

The river is visible from every seat in the restaurant. The interior space — whitewashed walls, dark blue floors — sprawls with idiosyncratic charm, and has bar and porch seating as well as a main dining room. The Slipway’s ambience is casual, friendly, laid-back — yet with professional underpinnings. T-shirt-clad wait staff bustle with an energy that makes for a dynamic vibe.

Tenants Harbor native Yakovenko and longtime sous chef Bill Zbylut, who worked together at the Dip Net, have teamed up again on the Slipway. “We designed this kitchen together and built exactly what we have both dreamed of,” says Yakovenko. Instead of relegating the working space to behind the scenes, their kitchen is contiguous to the seating areas.

The fried food that emerges from that kitchen is some of the very best in Maine. The Slipway’s fried oysters — lightly breaded golden pillows, ethereally crisp outside, melting essence of ocean inside — are accompanied by a kicky beet juice-tinged ginger shallot dipping sauce. A zesty lemon pepper aioli pairs with the lightly fried calamari, and monk nuggets come with chipotle lime aioli. To maintain consistency, the Slipway kitchen fries in peanut oil, filters it several times a day, and changes it frequently. All the sauces and dressings are house made, each one different, each designed to complement a particular dish. Coleslaw is a calico mélange of shredded green and red cabbage tossed in a light mayonnaise-based dressing.

The Slipway’s fish and chips — a basket spilling over with chunks of golden fried haddock and hot, salty fries — is testimony not only to the kitchen’s high cooking standards but also to their ability to access top-quality fish. Port Clyde Fresh Catch supplies most of the restaurant’s seafood, and they buy handpicked local crabmeat for their crab rolls and crab melts. Warren’s School House Farm and Beth’s Farm Market provide in-season vegetables and fruits.

In addition to a chilled seafood bar, seafood appetizers, salads, sandwiches, rolls, and baskets, the menu features a few more substantial dinner items, including a multi-seafood rendition of bouillabaisse with a saffron-laced broth, a no-holds-barred shore dinner (lobster, clams, mussels, corn, and bread), and clam and mussel linguine with tomatoes and pecorino. For the non-fish lover, the kitchen turns local Maine-ly Poultry birds into grilled chicken, chicken fingers, and chicken Milanese. Curtis Custom Meats, of Warren, supplies beef for the Slipway’s burgers and their grilled strip steak with chimichurri sauce, which is served with fresh seasonal vegetables and crispy potatoes. If the kitchen has a weakness, it is in the chowder and soup bases, which could use an infusion of deeper seafood flavor.

Yakovenko’s mother, Sandy, who was the dessert maker for the Dip Net, continues to do all the baking for the Slipway, turning out seasonal fruit pies and shortcakes, a classic yolk-rich crème brûlée, a dense flourless chocolate cake, and such innovative creations as an anise shortbread cookie topped with lemon cream and raspberry coulis.

The Slipway’s extensive and moderately-priced wine and beer list features more than a dozen vintages by the glass, several beers on tap, and imported and domestic bottled beers. A fair number of the specialty cocktails seem to be variations on the Dark & Stormy (ginger beer, rum, lime), drinks totally appropriate to a Maine waterside establishment.

“Finding this place, being able to buy the best ultra-fresh Gulf of Maine seafood, having loyal customers who take the time to find us down here on the dock — I feel like things couldn’t have worked out  better,” says Yakovenko.  Brooke Dojny